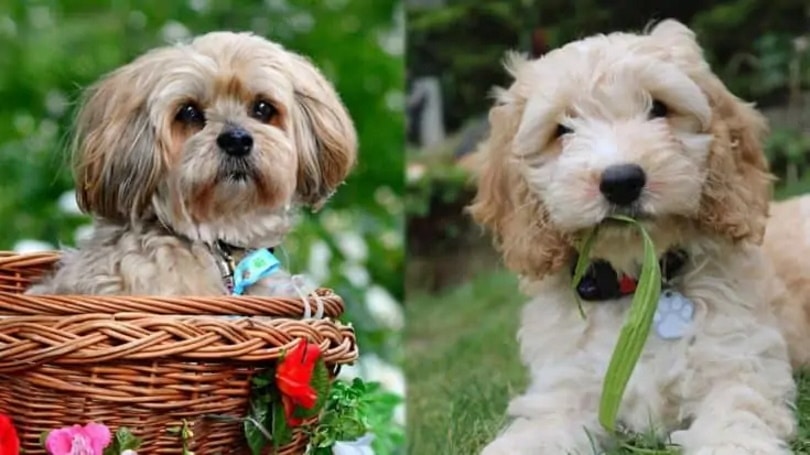 The Lacasapoo is a small to medium cross or mixed breed with one purebred parent, the Lhasa Apso and one Designer dog parent, the Cock-A-Poo (also spelled Cockapoo). She has a life span of 12 to 18 years and is skilled at guarding, watchdog and jogging. She is also sometimes called a Lacasadoodle and is a very energetic and happy little dog.

Where does the Lacasapoo come from?

The Lacasapoo is not like other designer dogs, a term given to deliberately bred mixed dogs. Most designer dogs have two purebred parents and their offspring is the desired result. The Lacasapoo however is a cross of a purebred and another designer dog. With three types of dogs in the mix altogether there can be a lot of differences even in the same litter in looks as well as temperament. Also keep in mind that the popularity in designer dogs has seen a surge in puppy mills and bad breeders looking to make money but who do not take care of their animals and have no real breeding knowledge. Here is a look at the parent’s backgrounds.

The Lhasa Apso is considered a sacred dog where he comes from, which is Tibet. His name comes from Lhasa the holy city there. He has been around for thousands of years and was not a dog owned by common people until very recently. He was bred by nobility and monks only and his purpose was to protect them and guard them. Throughout history the Dalai Lama has gifted pairs of this dog to people in other countries he deemed worthy, and that was the only way the dog was allowed to leave Tibet. The dog was believed to bring with him good fortune and prosperity. He came to America in 1933 when a pair were gifted to a naturalist and world traveler. He then used them as his foundation for a kennel.

The Lhasa Apso today is still very much a protector and watchdog. He is very protective of his owner and family and will remain aloof with strangers until he gets used to them and judges they are not a threat. He does take longer to mature than most dogs and has an interesting mix of traits being playful but regal, happy and fierce, devoted but independent. He tends to try and set himself up as the top dog and has to be taught and reminded often who is pack leader. He does not require a lot of activity, a couple of short walks and some play is enough. While he is independent he will follow you to stay close to you around the house. But he is better at being left alone for moderate amounts of times.

The Cock-A-Poo is a mix of the Poodle and the Cocker Spaniel and is one of the oldest designer dogs. It is in fact heading towards being a purebred if certain breeders have their way. He was bred in the 1960s and since then has been a very popular dog for its easygoing nature and low shedding coat. He is smart and loving and is a popular family dog. In 1999 the Cockapoo Club of America formed and put forth a breed standard. They support multigenerational breeding. In 2004 the American Cockapoo Club formed and they stick to first generation breeding but also have a breed standard.

The Cockapoo is a friendly and happy companion dog, eager to please and intelligent. He adapts well to his owners, he can be active and he can be happy to relax and snuggle too.

The Lacasapoo is a cheerful and out going dog who is smart, loyal and very loving. She is alert and can be protective despite her small size. She is wary of strangers but otherwise is friendly and sociable. She tends to form very close bonds with one owner but is still affectionate to the rest of the family. She prefers to be around people but can handle being left alone on occasion. She is eager to please and loves to get lots of attention.

This is a small to medium sized dog weighing 14 to 25 pounds and standing up to 15 inches tall. Her coat can be short to long, dense, silky and wavy to curly. Common colors are silver, white, black, brown, cream and brindle. She also has floppy ears.

How active does the Lacasapoo need to be?

While she has a lot of energy and is playful her size means she really is just slightly active and does not need an active owner to keep her happy. She is of a size where apartment living is fine and she does not need a yard though if there is one that is another place for her to investigate and play in. She will need at least one daily walk, preferably two. She will also enjoy going to a dog park to play and run off leash.

She is intelligent and eager to please so she is easy to train and may even need less repetition than some other dogs. Early socialization and training are very important. This is how you give your dog guidelines and rules that they need, you ensure your dog is well developed and trustworthy and you can have confidence in having the control you should always have. Use positive techniques so use treats, rewards, praise and encouragement. She is sensitive so scolding and punishments are not going to be effective. Stay firm so that you are the clear pack leader and be patient and consistent.

The Lacasapoo has moderate needs when it comes to grooming. She has low to moderate shedding depending on her coat, the more like a Poodle’s it is the less shedding and more chance of it being hypoallergenic. She will need regular trimming or stripping at a groomers and a bath now and then just as needed. Bathing too often damages her natural oils in her skin as does using any kind of shampoo other than one for dogs. She will also need her nails clipped by the groomer when they get too long. This is something you can do yourself with proper dog nail clippers but take care not to cut too low as cutting through the quick hurts her and will bleed a lot. There are ear cleaning solutions you can use to wipe her ears once a week and at the same time check for infection. Her teeth should be brushed at least two to three times a week.

Socialization will help her interactions with other pets, dogs and children. With socialization she is great with children as she loves to play, is happy to be energetic with them but is also affectionate towards them. She also gets along well with other dogs and other pets.

The Lacasapoo is alert and wary of strangers and she is likely to bark to let you know if an intruder is trying to get in. She barks rarely to occasionally and she will need to be fed ¾ to 1 1/2 cups of good quality dry dog food a day, split into two meals.

While she is in general a healthy dog there are health issues she can be more prone to and some concerns she can inherit from her parents. These issues to watch for include Addison’s, Bloat, Cushings, Epilepsy, Hypothyroidism, Legg-Perthes, Patellar Luxation, Eye problems, Von Willebrand’s, Kidney problems, Hip Dysplasia, Skin Problems, Allergies and Ear infections.

Costs involved in owning a Lacasapoo

The Lacasapoo puppy is not an easy puppy to find so pricing at the moment is not possible. However there are other costs that can be outlined for you. Initial medical costs like blood tests, a check up, deworming, micro chipping, spaying and vaccinations come to $270 to $300. A crate, carrier, collar and leash are also needed and will cost another $185 to $200. Annual medical costs like vet check ups, shots, pet insurance, flea and tick prevention come to between $460 to $560. Annual non-medical costs like treats, toys, food, license, grooming and training come to between $680 to $780.

Looking for a Lacasapoo Puppy Name? Let select one from our list!

The Lacasapoo is not a common designer dog but should you like the look of her and you are able to find a good breeder she is certainly a great little dog to have. You can get some who are hypoallergenic and low shedding, and she is also smart, easy to train and a joy to have around.