10 Largest Rabbit Breeds in the World 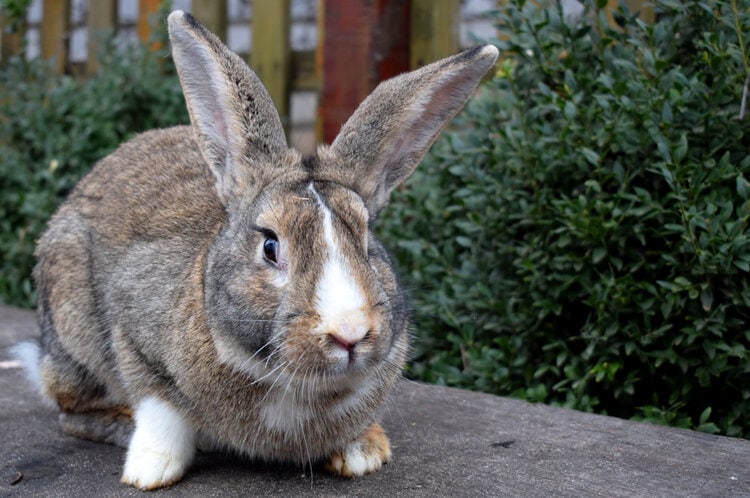 When you think of rabbit breeds, you may not picture one bigger than a medium-size dog. Ralph, the current Guinness World Record holder for the largest rabbit, has an official weight of 55 pounds and consumes $90 in food a week. He’s a Continental Giant, one of the largest breeds of rabbits in the world.

Whether you agree bigger is better, our list of the 10 largest rabbit breeds in the world may have you admiring their robust size and longing to wrap your arms around them. While they’re all large, these giant rabbit breeds have a wide range of temperaments and a variety of different features. Once bred for fur and meat, most of these rabbit breeds are now more popular as pets.

Weighing up to and occasionally over 20 pounds, the Flemish Giant is the largest rabbit breed in the world. This “gentle giant” has a docile temperament and an eight- to 10-year life span. The Flemish Giant rabbit breed comes in seven different colors. This breed dates as far back as 16th-century Belgium and was originally bred for its fur and meat. These days, you’ll most likely find the Flemish Giant being bred for show or raised as a pet. Owning such a large rabbit requires plenty of space, a big food budget, and ample time for care.

The Continental Giant rabbit breed can weigh up to 16 pounds and more. Thought to be descended from Flemish Giants, the body of this rabbit breed is powerful and long. Their thick, glossy coat comes in a variety of colors. Continental Giants have been useful as meat, fur, and show animals. As a pet, this rabbit breed has a gentle, friendly, and intelligent temperament, although they generally prefer not to be picked up. If you’re thinking of owning a Continental Giant as a pet, keep in mind that they’re better with older children and experienced owners who can provide a large living area.

With their pure white fur, red eyes, and stout stature, the Blanc de Bouscat has a stunning appearance. Full-grown bucks can reach 12 pounds, with mature does averaging around 14 pounds. You can identify a Blanc de Bouscat not only from their distinct white coat but also from their strong, muscular body, their round head set into their shoulders, and their long, upright ears. This rabbit breed has a French origin from the village of Bouscat in Gironde. A rare find in other countries, they’re especially popular as a pet in France due to their calm yet playful nature.

With a typical weight of around 15 pounds, the Spanish Giant is a crossbreed between Flemish Giants and other large Spanish rabbit breeds. They have long, upright ears and dense, soft short fur that comes in a few colors. Before Spain worked to bring back its numbers in 2009, the Spanish Giant nearly became extinct after being overused as a meat producer. Today, its numbers are growing. Of course, it helps that the Spanish Giant tends to have litters of up to 16 bunnies. This calm and docile rabbit breed makes good pets, although its lifespan is only four to six years.

The Hungarian Giant rabbit breed weighs between 11 and 15 pounds. They came into existence over two hundred years ago by the intentional breeding of wild rabbit breeds with a variety of continental rabbit breeds. The Hungarian Giant was first known as Hungarian Agouti until further breeding expanded its color and pattern diversity. This rabbit breed has soft, dense fur and upright ears. These rabbits have mostly been used for their meat. Recently, they have become show rabbits and pets.

A widely popular rabbit breed, the French Lop can easily reach a weight of 15 pounds and beyond. This breed was created in France in the 19th century from a cross between an English Lop and a French Butterfly rabbit. One of their most distinguishing features is their long, floppy ears that reach well below their jawline. They also have a broad forehead and chubby cheeks. Their soft yet dense rollback coat comes in a wide range of colors, including white, black, blue, brown, fawn, opal, chinchilla, and Siamese. This rabbit breed has a friendly, social nature that makes them wonderful pets. In fact, they thrive with human interaction. They make an impact as show rabbits as well.

Derived from Flemish Giants, the British Giant doesn’t grow quite as big as its relative but still weighs between 11 and 15 pounds. They have a long, powerful body, a broad head with tall, upright ears, and a cottontail. This rabbit breed has a medium-length coat that is soft and dense. British Giants come in a variety of colors. This rabbit breed is generally hardy and often bred for meat. The British Giant also makes a wonderful pet with its easy-going and docile temperament. They’re relatively inactive, preferring to relax and stretch out.

The Silver Fox can grow to a maximum weight of 12 pounds. Aptly named, the Silver Fox has a short, dense coat with standing fur that has silver tips resembling the Artic based Silver Fox. Although it comes in blue, chocolate, and lilac, black is the only color recognized by ARBA (American Rabbit Breeders Association). The Silver Fox has a medium build and short, upright ears. This rabbit breed originated in America by Walter B. Garland and was originally named the American Heavyweight Silver. They have been raised for their fur and meat as well as for show. As a pet, the Silver Fox rabbit breed has a gentle temperament. This rabbit breed is known as being one of the best mothers to their young.

Listed by the ARBA (American Rabbit Breeders Association) as having a maximum weight of 16 pounds, the Giant Chinchilla rabbit breed was developed in the United States in 1921 by Edward H. Stahl. The purpose of this rabbit breed was to produce valuable chinchilla fur on a larger animal. The result is a rabbit breed with a soft, dense blue-grey fur coat and a soft white underbelly. They have a large body with long, upright ears. The Giant Chinchilla rabbit breed can live up to 10 years. They make lovely pets and can be found right beside their owners. Their temperament is relaxed, calm, and gentle yet playful.