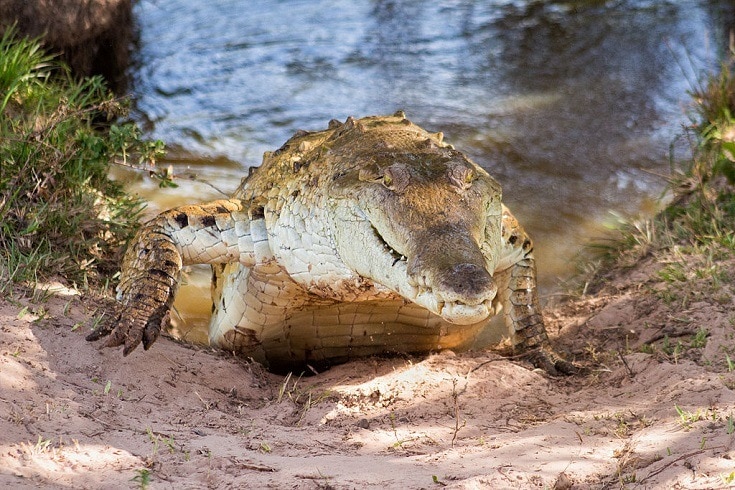 If you are interested in reptiles, we have a treat for you. We’ve gathered a list of the largest reptiles in the world to share with you. We’ll tell you the length and weight of each one and give you a little information so you can learn more about them. Keep reading while we present to you 18 of the largest reptiles.

We’ve listed our reptiles by weight, starting with the lightest and moving up.

The Reticulated Python is a large snake from South and Southeast Asia. It’s considered the longest snake globally and can often reach more than 22 feet long, weighing more than 300 pounds. It’s an ambush predator that waits until its prey is within striking distance before making a move. It has smooth scales and a complex geometric color pattern.

The Galapagos tortoise is the largest globally, often reaching more than 390 pounds and reaching 4.9 feet in length. You can only find it on the Galapagos Islands, and it has a large bony shell big enough to carry a man and a diet that consists primarily of herbs.

The Aldabra Giant Tortoise is a very large turtle that can reach up to 550 pounds and reach about 4 feet in length. Its diet consists mostly of herbs and small shrubs. Its large size allows it to knock over small trees and create pathways for other animals. It’s brown or tan with a high, dome-shaped shell.

The Slender Snouted Crocodile is a crocodile with a narrow, chainsaw like snout. Its serrated teeth are perfect for catching fish and trapping them in its jaws. It doesn’t move very well on land but is very fast in the water. It usually weighs as much as 400 pounds and can be more than ten feet long.

The Burmese python is a large snake from Southeast Asia that’s taken hold in other parts of the world, including Florida, and experts consider it an invasive species. It can grow to weigh more than 400 pounds and reach 18 feet long. Its diet consists of rabbits, foxes, opossum, and even whitetail deer. It’s a dark-colored snake with brown patches down its back.

The Green sea turtle lives in the Atlantic ocean and can grow as large as 418 pounds. Young turtles have a carnivorous diet of fish eggs, mollusks, worms, and other small invertebrates, but as they get older, they will eat more plant material and become omnivores. Green sea turtles spend most of their life, and even sleep underwater, only requiring air every few hours depending on their activity level.

The Loggerhead sea turtle is another large turtle that you can find in the ocean worldwide, though experts consider it a vulnerable species due to declining numbers. It’s an omnivore eating primarily plants and small animals like worms and mollusks. It can grow as large as 441 pounds and is most active during the day.

The False Gharial is a crocodile that gets its name from its close resemblance to another crocodile we’ll talk about shortly.  It can grow up to 460 pounds and reach 13 feet in length. It’s an opportunistic hunter that eats plenty of fish and takes down larger animals despite its narrow jaws. Attacks on humans have been increasing over the years, possibly as a result of declining habitat.

The Boa Constrictor is another name for the Green Anaconda, and it’s the largest snake in the world, growing up to 17 feet long and weighing 500 pounds. Its diet consists of fish, birds, and nearly anything else it can find. Its eyes are set high on its head so it can hide in the water until unsuspecting prey ventures too close. Though many legends say otherwise, the Green Anaconda does not typically attack humans.

The Mugger crocodile is an endangered species of large crocodile from Iran and the Indian continent. It can grow to a length of 10 feet and often weighs between 350 and 700 pounds. It has a rough head with no ridges with large scutes around the neck. It has the broadest snout of all crocodiles.

The American Alligator is a large carnivorous reptile from the South and the Southeastern United States. It likes fresh water and swamps and eats all types of animals, including birds, fish, and mammals. It can grow to weigh between 450 and 1,000 pounds and can reach 9-13 feet long. It has a broader snout than the American Crocodile we’ll talk about soon.

The Gharial is a large crocodile with a narrow snout with a bulb that gives it its name. The bulb is only present on the male, and they use it to attract mates and to signal each other in the water. These reptiles can weigh anywhere between 350 and 1,010 pounds, and some can be 15 feet long. Its back turns black after 20 years, but its belly remains yellow. Its population has steadily declined since the 1930s.

The American Crocodile is a very large reptile that can grow to reach 1,200 pounds. Its average length is between 10 and 14 feet, and it’s the most widespread of the four types in the Americas. You can find them in coastal areas and rivers, but they tend to prefer saltwater. The eyes, nose, and ears of the crocodile are on top of the head. This placement allows it to lie in wait underwater.

The Black Caiman is another crocodile from South America. It can grow to weigh 1,300 pounds and reach 14-feet in length. It’s the largest predator in the Amazon Basin. It will eat anything it can find, including smaller crocodiles.

The Leatherback Sea Turtle is the largest of all turtles and can grow to reach 1,500 pounds. It’s one of the only turtles with a softback that it requires for faster swimming. It swims to follow jellyfish, its main food source. One turtle followed the jellyfish more than 12,000 miles as it followed the food.

The Orinoco Crocodile is a small population of large reptiles in South America. It can grow to reach 1,620 pounds, and some will be 16-feet long. It has a long snout and an opportunistic diet but feeds mainly on fish. It’s rarely dangerous to humans, though some accuse it of eating all the fish, making it hard on the local fisherman.

The Nile Crocodile is the second largest reptile in the world. It can grow to reach 1,650 pounds and be 16 feet long. It’s a freshwater crocodile that is social with others of the same species, often sharing food and hunting grounds. It uses ambush tactics and can wait for several days for prey to wander into its trap.

The Saltwater Crocodile is the largest reptile globally, reaching over 2,200 pounds in some cases and growing to 17 feet long. It will eat whatever is available and can survive a long time without food. It’s quite aggressive and difficult to study safely, so we don’t know as much about this giant crocodile as we would like.

The Saltwater Crocodile is the largest of all lizards, but the others aren’t far behind, and most would be something you don’t want to run into unexpectedly. We hope you have enjoyed reading over our list and found a few surprises as you did. If you have learned something new, please share these18 largest reptiles in the world on Facebook and Twitter.