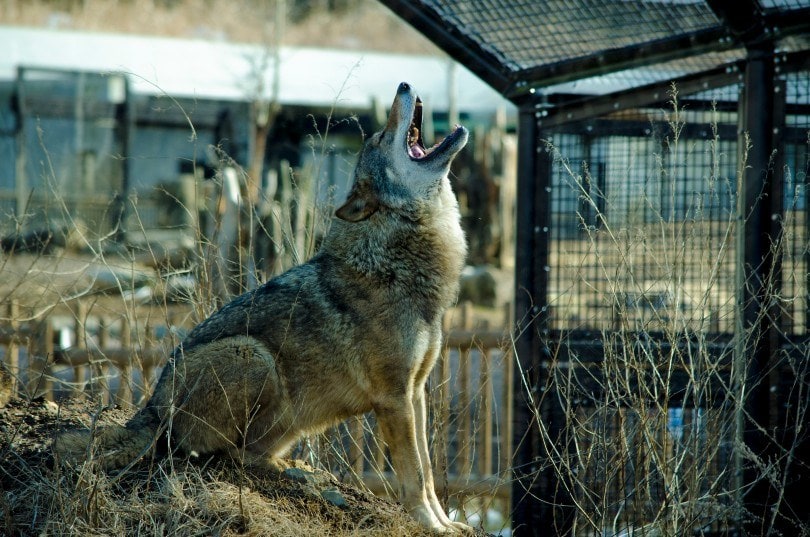 Wolves are the mysterious dog-like species that live in the woods. The word “wolf” carries a meaning of beauty for some and controversy for others. Wolves are the largest members of the dog family, but within the species, there are a variety of breeds, some larger than others.

Read on to find out more about wolves, including the top 6 largest wolves in the world.

Today, the world wolf population of all subspecies is unknown. Grey wolves, the most common subspecies, populate the lower 48 states in around the 6,000 range.

Wolves have been around since the beginning of the world. Their food source is meat, so they have been known to kill deer, elk, moose, and even livestock. That last one has gotten them on farmers’ hit list.

At one point, wolves were almost extinct due to overhunting, but conservation efforts have brought them back into normal population levels. They were taken off the “endangered species” list in 2020. People disagree whether they are actually endangered still.

Where Do Wolves Live?

Wolves are mostly wild and roam all parts of the world. They currently live in North America, Asia, Africa, and Europe. They are adaptable creatures and then can live in many different climates, including the desert, grasslands, tundra, forest, and woodlands.

The 6 Largest Wolves in The World

The Mackenzie Valley Wolf, also known as the Canadian Timber Wolf, is currently the largest wolf breed in the world. They get their name from hanging around a specific area in Canada called the Mackenzie River Valley. You can also find them in other parts of Western Canada and Alaska.

Weighing in at about 175 pounds, these wolves can be up to 7 feet long. These stats are essential to their survival at high altitudes, giving them more room for bigger organs like their lungs.

The Eurasian Wolf populates countries in Western Europe, Russia, Scandinavia and China. It’s got a skinnier build than other wolves, but it is still quite big at around 5 feet in length and up to 160 pounds. Their coats can be found in many colors, but are usually coarse and short.

The Tundra Wolf can be as long as the Mackenzie Valley Wolf, however, it does not weigh as much. You can find these wolves mostly in the coldest parts of Russia. It grows an extremely thick coat to insulate it from harsh conditions. Their meals consist of caribou and bison. To conserve its energy, it tends to hunt only the weak animals within a herd.

The Alaskan Interior Wolf haunts the semi-cold areas of Alaska and the Yukon. It’s also called the Yukon wolf. Within their pack, they tag-team hunting by surrounding their prey from all sides. The most common color of these wolves is black, but they are also grey in color. They are generally 6 ½ feet long and 120 pounds.

The Great Plains Wolf is about as long as the Yukon Wolf, but not quite as hefty in weight. This subspecies has potentially had the biggest hit to its population, as it was hunted to near extinction at one point. It’s the most common species in the United States and only has a pack size of about 5 or 6.

The honorable mention goes to the Dire Wolf because, although it is an extinct species of wolf, it was at one point the largest wolf in the world. It could grow up to 175 pounds. Though they are very closely related, scientists are finding out that Dire Wolves actually need their own species category.

It is extremely rare that wolves attack humans. This idea has mostly been populated out of fear of the creatures, and is largely untrue. Wild wolves are generally scared of humans and will stay away. Out of the documented attacks, most have happened from pet wolves that had become used to humans.

Can you buy a wolf as a pet?

It depends on where you live. Many state or city ordinances forbid citizens from owning a 100% wolf as a pet. Sometimes, a mix is allowed. Check your local laws to be sure.

Dog vs Wolf Battle, Who Wins?

Most likely a wolf would win in this battle. Wolves are much stronger and bigger than the average dog. However, a large and aggressive dog breed might make a good match for a wolf.