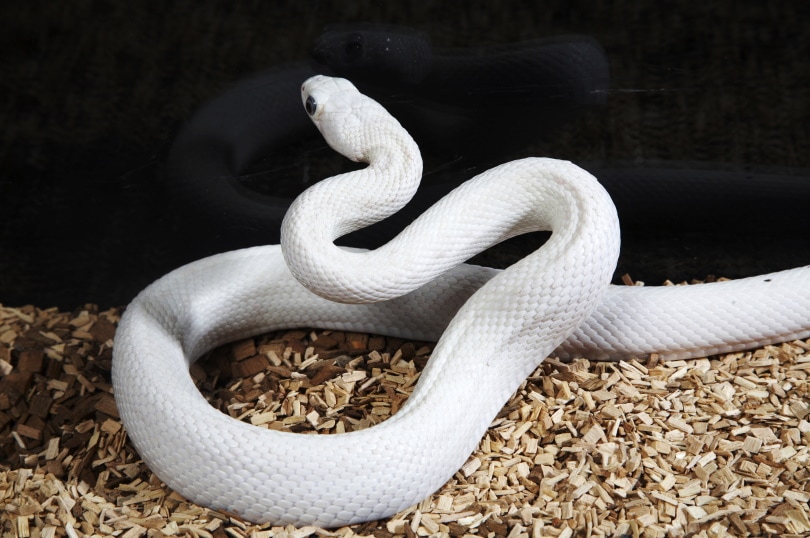 Ball Pythons are one of the most popular types of reptiles kept as pets right now in America, and they are available in a wide variety of colors and patterns—usually referred to as “morphs”, which result from selective breeding. However, the Leucistic (White) Ball Python is one of the most amazing morphs available. Its striking white color with dark eyes will stop anyone in their tracks. If you are interested in learning more about this rare breed, keep reading while we look at several interesting facts that you might not have heard before. Keep reading while we list several acts to learn more about this unique species to help you see if it’s something that you want to seek out for your home.

Leucistic is a term that means the animal doesn’t produce melanin as well as it should, resulting in a loss of pigment.

Leucistic animals can lose almost all of their pigment and appear white, but their eyes will remain dark, unlike albino animals.

Some Leucistic snakes will retain some of their pigment, and patterns and colors may still be visible. Black is often a color that remains after the others have faded.

Other snakes besides the ball python can be leucistic, including the Texas Rat Snake.

Other animals besides the snake can be leucistic, including the killer whale, giraffe, buffalo, and many deer species.

The Piebald mutation found in many animals, including dogs, cats, and horses, might be a type of Leucism.

The Ivory Ball Python morph is quite similar in appearance to the leucistic varieties but is not the same. It usually appears pinker in color, and the pattern is usually more visible.

Animals with one copy of the leucistic gene will have a minor pigment reduction, while snakes with two copies will have a dramatic Leucistic white appearance.

The Black Eyed Leucistic morph is much easier to create than the Blue Eyed Leucistic and only requires breeding two Yellow Bellied Ball Pythons together.

The Blue Eyed Leucistic morph is associated with several different genes called a “complex” that you can combine to create the blue eye color.

Some mutations associated with blue eyes, like the Spider mutation, can lead to health problems.

Some Blue Eyed Leucistic snakes can have protruding eyes, and it seems to be more common in snakes created using the butter or lesser platinum mutations. However, the eyes don’t seem to bother the snake or cause it to be unhealthy.

A post shared by Taste Of The Wild Life (@living_withsnakes)

Blue Eyed Leucistic snakes with bulging eyes may require a diet of thawed frozen animals to protect the eyes from the damage that might occur capturing live prey.

Leucistic Ball Pythons require the same care as any other Ball Python morph, and you will need to provide it with the same space, temperature, humidity, and diet.

Leucistic Ball Pythons do not seem to be sensitive to light like albino animals, but they will usually choose to avoid it since they are primarily nocturnal.

Not long ago, there were no white snakes available, and only the hard work of breeders made it possible.

The Leucistic (White) Ball Python morph is an impressive and striking animal, whether it has black eyes or blue. It’s an extremely rare morph but becoming more popular with each passing day as breeders become more proficient at creating them. So, there is still plenty of time for you to become one of the first people in your area to own one of these unique pets. It doesn’t require any more care than any other ball python, and if you already have experience raising snakes, you will feel right at home.

We hope you have enjoyed reading over this list and found some new information you haven’t heard before. If we have convinced you to seek out one of these majestic animals, please share these 20 interesting facts about the Leucistic Ball Python on Facebook and Twitter.