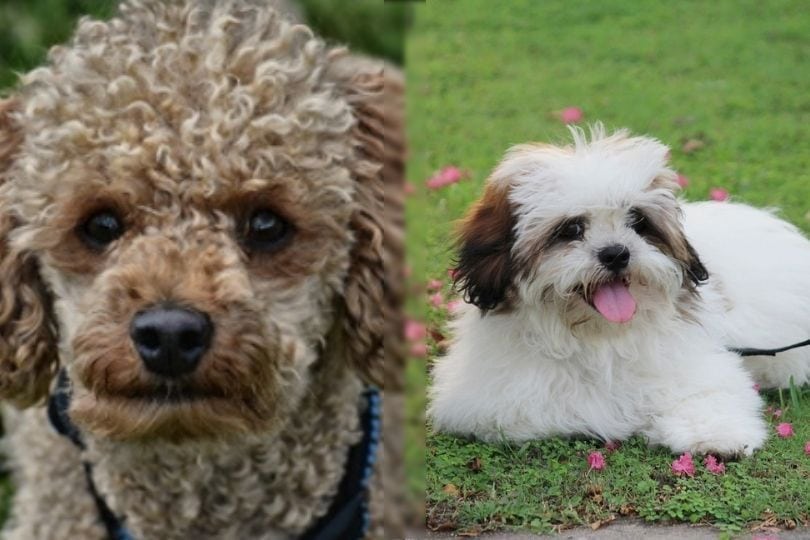 The Lhasapoo is a cross or mixed breed the offspring of a Poodle (most commonly a Miniature Poodle) and a Lhasa Apso. She has a life span of 10 to 15 years and is talented in areas such as agility, rally and obedience. She is sometimes called Lhasadoodle and is an adaptable and playful and affectionate small dog.

Where does the Lhasapoo come from?

The Lhasapoo is also known as a designer dog. Designer dogs covers a large number of mixed breeds that have been deliberately bred in the last two decades. Often they are given blended names of the two purebred parents. There is nothing wrong with a mixed dog, some are quite fantastic in fact. The issue is the breeders who have bred them. With purebreds there are standards and because they are established personality and looks can be predicted fairly accurately. With designer dogs there are no standards and there is no way to control what traits a puppy gets. It could be the best, it could unfortunately be the worst. There are a lot of unscrupulous breeders who see this trend of mixed breeds as an opportunity to make money. They breed together two dogs with no thought about whether that is a good blend, with no care about the health of any animal involved and with no standards they have to follow. If you feel a Lhasapoo is the dog for you, have a look at the parents origins and personality below to get a feel for where they come from and remember to buy from trustworthy breeders.

This dog is from Tibet where he was named after the holy city there. Only nobility and monks were allowed to breed them for thousands of years and his purpose was to protect and guard. This was not a dog that common people owned, he was considered to be sacred. Over the years each Dalai Lama has gifted pairs of them to different people and this is the only way they have been able to leave the country. The dog is thought to bring with him good luck and prosperity. When a pair were gifted to an American world traveler and naturalist in 1933 he eventually developed a kennel.

Today this dog is quite an interesting mix in personality traits. He can be regal, bold and independent but also matures late, and can be playful and mischievous. He may be a smaller dog but he is quite sturdy and he retains his protective instincts. He is wary around strangers and he will bark to alert you of an intruder. He is generally happy but he likes to be the boss so training and socialization are important. He responds better to firm but positive and kind leadership. He will trail you around the house to be close to you but can handle being left alone and is unlikely to experience separation anxiety.

The Poodle is another old breed who was bred to be a retriever of waterfowl originally in Germany. Over the years when he made it to France he was bred and refined further into the Poodle we are more familiar with now. There are and have been for hundreds of years three sizes. Standard used for waterfowl hunting, Miniature used for sniffing out truffles and Toy used as companions and often carried around in the sleeves of the French nobility. The circuses and traveling performers of the time also took a liking to the Poodle. He was easy to train because of his intelligence and learned tricks and routines quickly. They would sculpt his coat to make him look more interesting and the wealthy spectators saw this and copied it. In England he was first registered in 1874 and in the US in 1886.

Today he is a very popular dog because of his intelligence, affectionate nature, ability to entertain and how friendly he is. He is a very loyal dog, and his aloofness is more a wariness of strangers. He loves to play and is eager to please. He is protective of his home and his family and makes a good watchdog.

The Lhasapoo is a friendly dog who loves her people but can be suspicious of strangers. She is protective, affectionate and very loveable. She usually stays close to her family and likes to be where everything is happening and loves to receive attention. She can be timid so early socialization and training is important. She has a gentle nature, is usually calm indoors but loves to be out having fun, playing and being active. She is intelligent but can have a stubborn side. The Lhasapoo also often bonds very closely with her owner and usually gets on well with children and other pets.

She is a small dog weighing between 10 to 20 pounds and standing 9 to 13 inches tall. She has an alert face, a round head and a short muzzle. Here eyes are big and so is her nose! She has a sturdy and well proportioned body and her ears that hang down and are feathered. Her coat could be curly like a Poodle’s or straight and long like the Lhasa Apso’s. It can come in various colors such as white, brown, black, patterned, apricot and cream.

How active does the Lhasapoo need to be?

This dog just needs a moderate amount of activity each day to keep her happy and healthy. A walk each day with some play time, some time in the yard, trips to the dog park and games like chase and fetch and so on. She can adapt to apartment living quite well as long as she gets out each day.

She is intelligent and fairly easy to train but she can have a stubborn streak. She needs an owner who can stay calm and positive, keep the training interesting and use positive methods of encouragement like treats and praise. Because she can be timid early socialization and training are important. Also keep in mind as a puppy she can be more difficult than as an adult. Keep it fair and consistent.

Grooming her coat will depend on what kind she has, curly or wavy, or straight and long. She is a low shedding dog and can be suitable for people with allergies though that would need testing. She may need more frequent trips to a groomer for trimming or clipping. Daily brushing is likely going to be needed to avoid matting. Some people prefer to give their dogs regular baths, but in fact they are only needed when she is getting especially dirty or smelly as too frequent bathing can dry out her skin. She will need her ears checked and cleaned once a week, her nails clipped if they get too long and her teeth brushed at least two to three times a week.

She is a good watchdog and will let you know if a stranger breaks into the home. She can be a bit of a typical small yappy dog so some of that training can help control that. She can handle the heat well but is not so good in very cold climates. She also tends to dislike any wet weather, rain, snow and so on. She will need to be fed ½ to 1 cup of good quality dry dog food each day, divided into at least two meals.

As mentioned buying from good breeders means you can ask and see health clearances that give you better odds at a healthy dog. There are issues she is at risk of because her parents are too. They include;
eye problems, patellar luxation, SA, kidney problems, Addison’s disease, bloat, Cushings Disease, epilepsy, hypothyroidism, Legg-Perthes Disease, Von Willebrand’s disease, allergies and hip dysplasia.

Costs involved in owning a Lhasapoo

A Lhasapoo puppy will cost between $400 to $1000. They are quite popular and small and cute sells right now on the designer dog market. Other costs that may need to be covered if not included in the price are carrier bag, spaying, crate, collar and leash, food bowl, blood tests, deworming, vaccinations and chipping. This will be another $360 to $400. Yearly medical costs for check ups, pet insurance, flea prevention, shots and other regular health concerns come to $435 to $550. Yearly costs for other things like food, trainings, toys, treats and license come to $265 to $375. If you also are taking her to a groomers for regular hair and nail clipping these will be additional costs.

Looking for a Lhasapoo Puppy Name? Let select one from our list!

As a small dog that suits apartment living and only has moderate activity needs this is a good dog not just for families but also for seniors looking for a loving companion. She gets a lot easier over the age of three, can be good for people with allergies and will be a happy, playful and loyal dog.