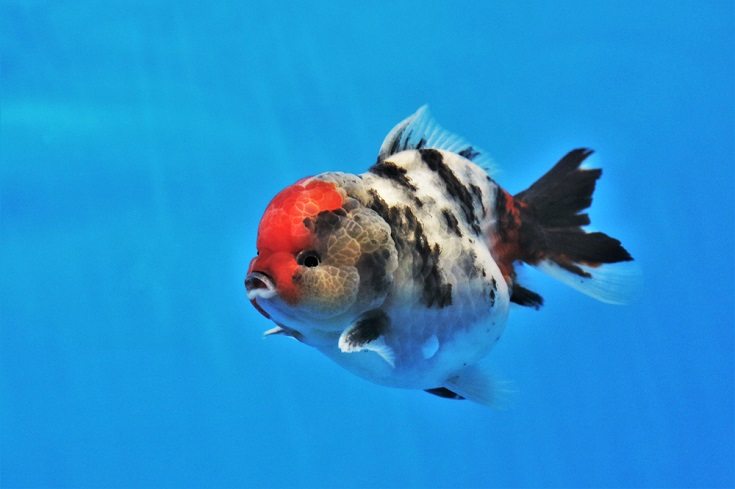 Easy to care for and unique in appearance, the Lionhead Goldfish is a great addition to any freshwater aquarium. These fishes mature to around eight inches with raised scales and fantail that sets them apart from other goldfish. They’re herbivorous fish with minimal maintenance needs, though they do require a tank with plenty of filtration since they produce a lot of bioload. Let’s take a closer look at some of this breed’s specific traits and how they might fit into your aquarium.

When it comes to goldfish without a dorsal fin, the Lionhead Goldfish is the most popular by a long shot. They’re some of the most well-known goldfish and you’ll find them in many aquariums across the world.

These goldfish don’t exist naturally; they were specifically created to achieve particular traits. They’re actually a species of Asian Carp, and can even survive in minimally brackish water. They tend to get along with most community fish that aren’t aggressive since they’re herbivores themselves. This includes other fish like pencil fish, mollies, and smaller tetras. However, they also seem to do just as well as solo fish and don’t require the company of other fish to be healthy and happy.

The Lionhead Goldfish was created in China, though it quickly spread throughout the world, gaining popularity as an aquarium fish thanks to its interesting shape and appearance. It’s considered to be a tranquil and peaceful fish with graceful movements and an overall beauty that have helped it to gain popularity so quickly. Even during mating season, they’re not known to display aggressive tendencies.

Don’t expect to see your Lionhead Goldfish zip around the aquarium. They’re notoriously slow swimmers, thanks in part to the lack of any stabilizing dorsal fin. They’re also known to have poor eyesight, which often results in them being quite clumsy.

How Much Do Lionhead Goldfish Cost?

The price of Lionhead Goldfish can vary dramatically, depending on where you purchase it. They’re also quite a bit pricier than any standard-variety goldfish. You can generally pick up a common goldfish for between a few cents and a few bucks. But Lionhead Goldfish cost several times as much.

You should expect to spend $15-$30 on your Lionhead Goldfish. This doesn’t include the cost of a tank and all the necessary accessories; just the goldfish.

Lionhead Goldfish are considered community fish and they’re known to be very peaceful. They can get along great with any other peaceful community fish, so they’ll likely do well being added to your current aquarium with whatever fish are harmoniously existing in their now.

But they also do great as the only fish in a habitat and don’t require a community. They tend to be very slow and many think of them as lazy. In truth, they’re just poor swimmers so they don’t move around much.

Lionhead Goldfish look quite different from a common goldfish, thanks to their round, egg-shaped bodies, and the complete lack of a stabilizing dorsal fin. These are considered fancy goldfish and were specifically bred to create the “hood” on their head. This hood is meant to mimic the Chinese lion dogs; a special ornament often found in Chinese architecture.

That hood is called a wen, and it’s a growth that can get so large it covers the fish’s face. This can even start to block the fish’s vision, resulting in a poor swimming fish that can’t see well. The wen isn’t smooth though. It’s a bumpy growth with a texture similar to a raspberry.

You’ll find Lionhead Goldfish in a wide variety of colors. The most common coloration is a mix of red, orange, and white, but they can also be found in blue, black, calico, and combinations of these colors.

Often, this fish is mistaken for an Oranda Goldfish. These fish do look similar, but it’s easy to tell them apart because Lionhead Goldfish lack a dorsal fin while Orandas have one. But they share the same egg-shaped bodies, which is why they’re often mistaken for each other, though Lionheads tend to be rounder than Orandas.

How to Take Care of Lionhead Goldfish

Lionhead Goldfish are pretty easy to care for and won’t require any special tank setups. Still, you’ll want to ensure that your aquarium is in the proper range to keep your Lionhead in great health.

These fish tend to be about eight inches long, but they can reach lengths of up to 10 inches. They will require an aquarium that’s 20 gallons at the minimum, though a larger space is always beneficial. But these requirements are for a single Lionhead Goldfish. Each additional fish requires 10 gallons more space. If you plan on housing a community, you’ll want a tank that’s at least 50 gallons.

Lionhead Goldfish are not tropical, so they don’t need warm water, but they do have pretty specific temperature requirements. You’ll want to keep the water between 65 and 75 degrees Fahrenheit, so you might need to use a small water heater.

Like most goldfish, the Lionhead has a limited pH range that they do well in. They can tolerate a pH level of 6.0-8.0. You won’t want the tank to get below a pH of 6 or above a pH of 8 to keep your Lionhead healthy.

Lionheads are not very durable fish. Their wens are susceptible to infection and injury, so you want to avoid anything sharp or abrasive. Many people who keep these fish keep the bottom of their tanks bare. But if you’re going to use a substrate, smooth stones or sand are the best choices.

You can keep some plants in the tank with a Lionhead Goldfish. They might nibble on them or dig them up, but the plants shouldn’t pose a danger. However, you’ll want to stay away from most other decorations like driftwood and rocks. These abrasive surfaces can potentially cause damage to your Lionhead’s sensitive body.

If you have plants in your Lionhead’s aquarium, then you’ll need to worry about lighting. But if you don’t, then it won’t matter much. These fish do well in a brightly-lit or dimly-lit environment.

These fish are highly susceptible to illness and infection, so you’ll need to keep their habitat pristinely clean. As such, you’ll need a powerful filter to ensure their water is always devoid of contaminants.

These fish make great tank mates to other peaceful community fish. They’re non-aggressive and tend to be gentle, so they can do well with other non-aggressive fish.

However, Lionhead Goldfish do very poorly with fast-moving fish that might make them compete for food. Remember, Lionhead’s are poor swimmers. They simply can’t keep up and won’t be able to feed. This means they won’t do well sharing a tank with many other goldfish like common, comet, and shubunkin goldfish.

Because they’re slow and large, these fish also can’t defend themselves, so they should never be with fish that nip fins or show aggression. If your Lionhead gets hurt, they’re more likely to get an infection than other breeds.

Instead, you should keep these fish in a tank with schooling fish or other slow swimmers. Bubble Eye Goldfish make great companions, as do Black Moor and Celestial Goldfish. Minnows and danios are also good choices. You can even go with bottom feeders like loaches. And non-fish species like snails and shrimps are generally sound choices as well.

What to Feed Your Lionhead Goldfish

Since Lionheads are omnivores, they’ll eat a wide range of foods. However, these fish are known for their voracious appetites, so you’ll want to limit feeding to twice daily. Otherwise, your fish will likely overeat, which can lead to health problems.

These fish will eat certain proteins that came from live foods. These “meats” should only make up about half of your fish’s diet at most. Some meat foods that your Lionhead will eat include:

While your Lionhead will eat and enjoy these foods, they should be eating many plant-based food sources as well. The other 50% or more of your Lionhead’s diet should consist of foods like:

Remember, these fish are slow, clumsy, and often don’t see well. They can’t compete for food, and with other fish sharing the same tank, they might not need some extra help when it comes to feeding time to make sure they’re getting their fair share.

Lionhead Goldfish are far from a hardy fish species. They’re susceptible to a wide range of issues and their facial growths provide a risk of their own. These fish are vulnerable to infections and they can be injured easily. Poor water quality or tank hygiene can mean death for a Lionhead Goldfish, so you’ll need to keep your aquarium in top shape at all times.

These fish often develop bacterial infections such as fin rot, fish tuberculosis, or dropsy. All of these can become fatal very quickly if not treated. You’ll also find that Lionheads are susceptible to fungal infections like cotton wool fungus, which can permanently alter your fish.

Infections aren’t the only risk though. You’ll also have to watch out for parasites and protozoa like flatworms, anchor worms, fish lice, Ich, Chilodenella, and Costia.

A Lionhead Goldfish lays a clutch of approximately 10,000 eggs. They can be bred in small groups with as few as five fish, though they also breed well in large groups. To induce mating, you’ll need to mimic natural conditions.

First, you’ll need healthy fish that are free of diseases or health problems. You might even want to treat them for parasites. Then, you should separate males and females to increase interest in spawning, introducing them to the breeding tank together.

To get them to start spawning, you’ll have to start slowly reducing tank temperatures until the water reaches about 60 degrees Fahrenheit. Once it reaches this temperature, you’ll then need to slowly warm the water by a few degrees each day until spawning begins, which is usually between 68 and 74 degrees.

Don’t worry when the males start chasing the females around the tank. It’s non-aggressive and may continue for several days while the colors of the fishes get more intense. Soon, they’ll mate. Shortly after, the parents will begin eating the eggs, so you’ll want to separate them quickly. The eggs will hatch in less than a week.

Are Lionhead Goldfish Suitable for Your Aquarium?

But if you have a colony of peaceful fish, then a Lionhead might fit right in. Just make sure you don’t have any rough or abrasive decorations in there that might cause injury. These fish aren’t very hardy and can be easily damaged on just about anything. Surround them with other slow swimming fish that don’t compete for food and they should do just fine.

How to Care for Your Dog’s Paw Pads (From DBP)