Llama vs Camel: What’s the Difference? 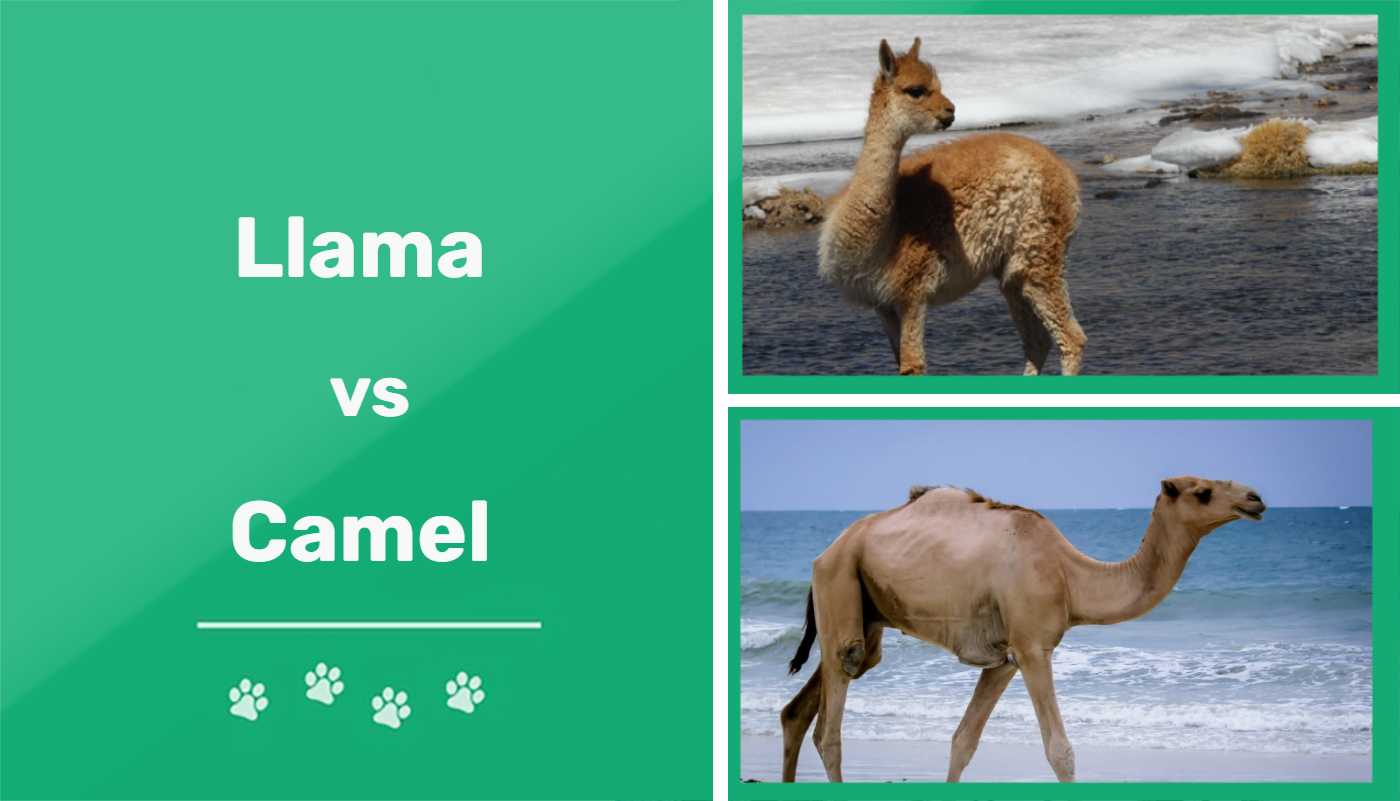 Camels are native to Asia and Africa, and they have humps on their backs that make them capable of going for long periods of time without fresh water. Llamas come from South America, and they have no humps which means they don’t have the same extraordinary ability to survive without water. Continue reading to discover more about these amazing creatures and how they differ from one another.

We will insert images here. Leave the subheading.

The llama is a large mammal that stands about 4 feet tall at the shoulder. This animal’s elongated neck can easily add an extra foot or two to its height. Weighing in at 290 pounds or more, the llama is a formidable mammal with a rounded muzzle, a bit of an underbite, and a cleft upper lip. The llama’s unique, almost comical appearance makes this animal a popular attraction at zoos and wildlife parks the world over.

The llama is a sure-footed animal with a camel-like body shape, thick coat, and stubby tail. Each foot consists of two large toes complete with toenails and pads underneath. The pads make the animal’s feet soft and sensitive and very well-suited for rough environments. Because the llama has a high concentration of hemoglobin in its blood, this animal can easily survive at high altitudes where there is little oxygen.

Many people today are choosing to keep llamas as pets on their farms. These curious and sociable animals enjoy being around people and even other animals. They’re vocal animals that use a series of calls, hums, and clucking noises to communicate and warn of predators. As social pack animals, llamas prefer living in groups of around 20.

Llamas are herbivores that enjoy munching on grasses, seeds, grains, roots, low shrubs, and lichens. Like cows, llamas spend their days grazing in pastures and regurgitating their food, and chewing cud. While you may be tempted to get up close and personal with a llama at a farm or petting zoo, doing so comes with risks because this animal is known to spit when it feels agitated or unhappy. Llamas also spit to keep competitors away from food and to ward off aggressors. Some llamas are simply crabbier than others which leads them to spit with little provocation.

In all, there are five different types of llamas including the Classic llama, Wooly llama, Medium llama, Suri llama, and Vicuna llama. Each type has unique distinguishing features that set it apart from the others. For example, the Wooly llama is smaller than the Classic llama as it has much more wool covering its entire body.

Llamas were used by the early Incas as beasts of burden as well as for the production of meat and fiber. During the Spanish Conquest, llamas were used to transport ore mined in the mountains of Peru.

In the mountainous regions of Peru where the llama was first domesticated, this animal had and still has, a variety of uses. As a pack animal, a llama can carry up to 30% of its body weight, making it useful for hauling heavy loads. Female llamas are used in Peru as a food source, providing their owners with both meat and milk.

llamas were used as livestock guards once these animals were imported to North America in the early 1880s. These animals have a fine undercoat that’s often used for creating a variety of handicrafts and clothing. The coarse outer guard hairs are used in rug-making, wall-hangings, and lead ropes.

In the United States, llamas are raised to be companion animals, to show, and for their wool and fertilizer. Llamas are also used in the United States as livestock guards that work to protect sheep, goats, and other animals from predators.

It’s been found that llamas possess antibodies that mimic those made by our immune system that may help humans fight off coronaviruses including NERS and SARS-COV-2 which is the virus that causes Covid 19.

When you think of a camel, you probably envision a big bulky animal with a humped back and you’re right! It’s hard not to recognize a camel right away with its unmistakable humped back. long slim legs, elongated downward-dipping neck, and small narrow head.

All three species are about 10 feet long and 6.6 feet high at the hump. The males can weigh over 2,000 pounds with their female counterparts tipping the scales at around 1,400 pounds.

Camels are typically light brown although they can be dark brown or grayish brown. Camels have long eyelashes they use to protect their eyes from blowing sand and they can squeeze shut their nostrils to keep sand out.

Like llamas that spit, when camels feel excitement, they huff so forcefully that spit is expelled, meaning it’s risky to be in their vicinity unless of course, you don’t mind being covered in slimy spit!

Equipped to withstand high heat, camels can easily thrive in times of catastrophic droughts when other animals perish. This amazing feat is thanks in part to the camel’s ability to conserve water and tolerate dehydration.

A camel can go for up to a week without drinking water which is something we humans and most other animals can’t do. And camels aren’t picky about water either as they can even tolerate saltwater. These animals also use their fine wooly coats to insulate their bodies from heat and do it very well without sweating! The only time a camel sweats is when the temperature is above 106°F.

Domesticated camels are widely used to carry freight, goods, and supplies. These animals come in very handy in desert regions with rough terrain where wheeled vehicles struggle to move. That’s why many cultures today still rely on these big animals to move things from point A to point B.

Reddish-brown camel hair is used to make dry goods like blankets, rugs, coats, and knitting yarn. The best and finest camel hair comes from Bactrian camels, and it’s not sheared off the animals. Instead, the hair is simply gathered and collected as the animal naturally sheds its coat.

People living in many remote arid regions rely on camels for providing milk as this animal is often the only regular food source for its owners. The meat of the animal is also widely used as is the wool and the leather. And of course, on top of these uses, camels are the main source of transportation in many areas within Egypt, Morocco, China, Kenya, and Tanzania. Camels are even used for racing in many countries including Pakistan, Mongolia, Australia, and more.

What Are the Differences Between Llamas & Camels?

As you can see, llamas and camels differ in many ways, even though both belong to the same animal family. If you’re interested in owning a llama or a camel, you should check with your local government to ensure it’s legal to keep these animals on your land. While a llama can be purchased for a couple of thousand dollars, camels are pricey and go for $12,000 or more.