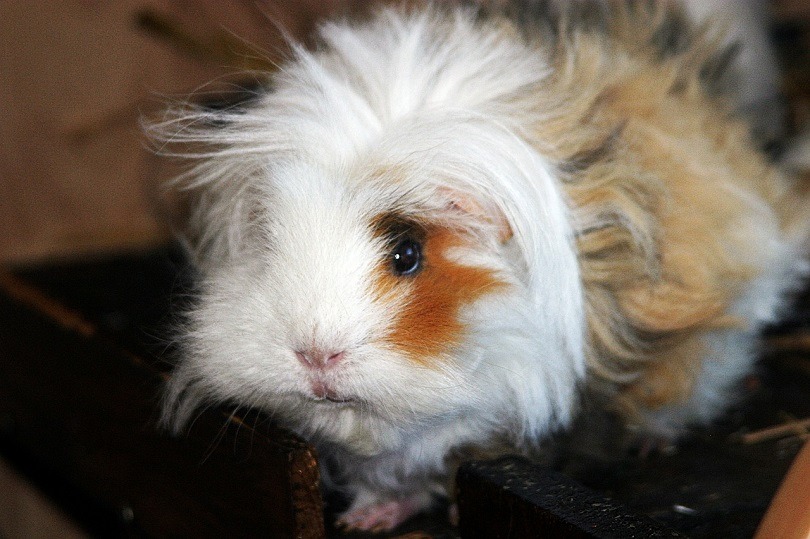 If you are a fan of manes or locks, it will be a case of love at first sight when you lay your eyes on the Lunkarya guinea pig.

The Lunkarya is a breed of guinea pigs with a characteristic unkempt appearance. This cutie has a dense, coarse coat with hairs that jut out in all directions. The hairs are curly, which gives the animal a wind-blown appearance.

This rare guinea pig breed is a phenomenal pet. Here is what you need to know about it.

Pronounced “lunka-ree-a,” the name Lunkarya was formulated by combining “Lundqvist” and “rya.” Lundqvist is the surname of the people who discovered and developed this breed, while “rya” is Swedish for sheep.

The Lunkarya was discovered in Sweden by breeders who noticed that one male in a litter they had received had odd variations on his coat. They named him Prince Adam, and when he bred, his children also had similar coats, and that was the origin of the breed.

Also known as “lunks,” this guinea pig features a long and disheveled coat. Hair strands shoot from its body in corkscrew curls resembling spikes. The coat of a Lunkarya is incredibly dense, in addition to having a coarse texture.

It is interesting to note that despite its wild appearance, all the hair on a Lunkarya’s coat is of an even length, apart from that on the face, which is shorter.

The Lunkarya comes in three different sub-breeds that have the following characteristics:

The Lunkarya has a short and stocky build, with broad shoulders.

This breed is generally a healthy one. However, their dense coats make them susceptible to heatstroke. Therefore, if you live in a warm area, take measures to ensure that the animal is cool.

Just like other guinea pigs, the Lunkarya is also susceptible to the following health issues:

Fortunately, all these potential health risks are things that you can control. With proper care, a Lunkarya can live for up to seven years.

The Lunkarya is a mild-mannered, gentle breed of guinea pig. While it is not a particularly high-energy breed, it is still quite curious and does not mind interacting with other pigs, as well as people. Their calm temperament makes them easy to handle, which is something to be grateful for considering that you will be grooming them almost every day.

Even with meticulous care, a Lunkarya will never be truly happy until they have a companion. This is because they are social animals and live in herds while in the wild. As such, it is best to adopt them as a pair, rather than a single piggy. Those with companions tend to be happier, more active, and healthier.

For a pet Lunkarya to thrive, it needs to be on a nutrient-full diet consisting of timothy hay, pellets, vegetables, and fruits. Avoid giving them commercial foods consisting of dried fruit, nuts, and seeds, as these have high sugar and fat content. Such foods are dangerous to guinea pigs, owing to their extremely sensitive digestive systems.

Nonetheless, piggies seem to enjoy processed foods. Therefore, use these as treats when looking to teach them new tricks. Treats should not make up more than 5% of the total amount of food that they consume in a day.

You must also note that while fruits and vegetables are beneficial to guinea pigs, these can make them sick when consumed in excess. Therefore, limit the number of fruits and veggies that you give to the animal.

Lunkarya, just like other breeds of guinea pig, cannot make their own vitamin C. As such, you must include vitamin C supplements in their diet to avoid a vitamin C deficiency.

The Lunkarya guinea pigs always look like they are having a bad hair day, making them look incredibly cute. Unfortunately, their long coat requires a great deal of maintenance, as it easily collects and traps dirt, urine, and feces. As such, without regular grooming, it can become a hub for bacteria, putting the animal’s health at risk.

In addition to regular brushing, you will also need to bathe the piggy every other week.

Lunkaryas, therefore, require more maintenance than most of the other guinea pig breeds. Consequently, they are not an ideal breed for someone who is not up for that responsibility.