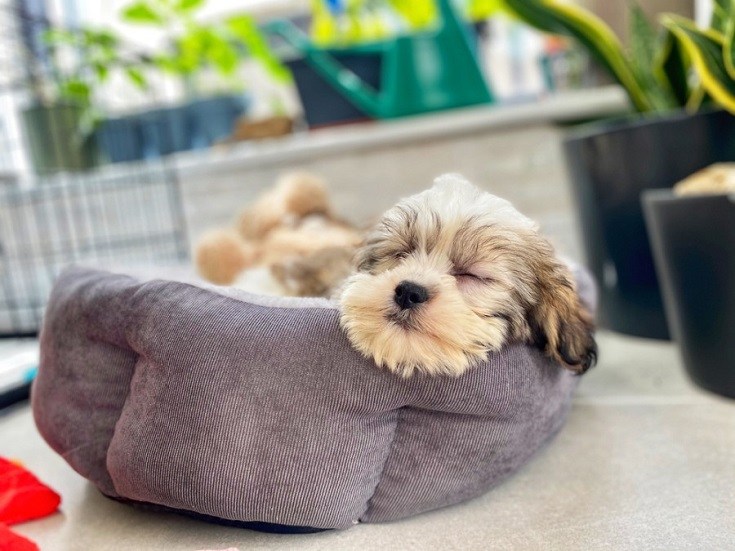 The Malchi is a mixed breed dog the result of crossing a Chihuahua with a Maltese. She has a life span of 12 to 15 years and is a small dog who participates in events for agility, obedience, and watchdog. She is also called a Chihuahua Maltese Mix, a Malachi, and a Maltechi. She is a very loyal, affectionate, and sassy little dog.

Where does the Malchi come from?

The Malchi originates from the United States, which is true for many of the designer dogs out there today. Designer dogs refer to a large number of mixed breeds being deliberately created, most of which are two purebreds bred together. Many designer dogs have names that are a blend of the two pure breeds who sired them. Some dog lovers are very pro purebreds only but all purebreds were created by breeding at least two if not more breeds into the line at some time. There is nothing wrong with trying to breed new dogs as long as it is done with thought, purpose, knowledge, care, and understanding. The reason designer dogs have a bit of a bad rap is that a lot has been created without any of that, by poor breeders only wanting to make money out of this trend. Be careful who you buy from.

With no information on the Malchi’s beginnings, we can look to the parents to understand a little better about what a Malchi might be like.

The short-haired Chihuahua was discovered in Chihuahua a Mexican state, in the 1850s. Before that there are two theories as to where they come from, one is that they are a result of breeding small hairless dogs from China with local dogs when they were brought over by Spanish traders. Another says he is descended from the Techichi a central and south American dog dating back to the 9th century. After the 1850s the Chihuahua was taken to America and by the late 1800s, they were being shown. In 1904 the first one was registered with the AKC. The short-haired was bred with the Papillons or Pomeranians to get the long-haired variety and the breed became very popular over the years being 11th according to the AKC.

The Maltese is one of the oldest toy-sized breeds there are and he can be traced back for at least 2000 years. His exact origins are unclear, some believe he was developed on the Isle of Malta, some in Italy, and some from Asia. He was popular amongst royalty across Europe up until the 16th century. Attempts to breed him to squirrel size in the 17th and 18th centuries nearly destroyed the breed. He was saved by mixing with other miniature and toy dogs like the spaniels, and poodles. This in itself led to several new breeds being formed. The Maltese we see today were bred by the English in the late 1800s.

Today he is very successful in dog shows and is a lively dog full of personality. He trains easily and loves people. He assumes everything and one he meets is a friend. He is also quite accomplished at getting his own way with everything. House training though can be difficult and because of his size, he may not be best suited for families with small children.

The Malchi is a loving and affectionate dog, very devoted to their family and protective of them too. She can be gentle, is good with children but is wary of strangers and will bark at them. She tends to be eager to please and is intelligent so training is fairly easy. She has a lot of sass and spirit, loves to play, and can have a mind of her own. She loves attention and will expect to be at the center of it when you bring her home. She is sensitive and will not be good being left alone, as she can suffer from separation anxiety.

The Malchi is a small dog weighing 5 to 12 pounds and measuring 12 to 14 inches tall. She has a short muzzle, bright almond-shaped eyes, and floppy ears with a round head. She can look more like a Maltese or more like a Chihuahua. Her coat therefore might be long, curly, and fluffy or it might be short and scruffy. Common colors include cream, black, white, and brown. She is a fragile small dog and has a bone structure that can easily break so care must be taken.

How active does the Malchi need to be?

She is suitable for apartment living as long as she gets some time outside each day and playtime inside too. A good walk each day is enough, occasional trips to a dog park would be a great treat. She will tire fairly quickly. Make sure you offer her mental stimulation as well as physical.

The Malchi is eager to please and intelligent. With a firm but positive training method, she should be easy to train. However, her house training may not be as smooth. Remember she is a sensitive dog so scolding and harsh tones are not going to get results. Be consistent and patient. Early training and socialization are important for any dog to bring out the best in them. Keep in mind she can have a stubborn side and if she is not correctly socialized and trained she can display negative behavior such as aggression towards other dogs, nipping, destructive behavior, being timid or nervous.

Living with a Malchi

She has moderate to above moderate grooming needs and can be hypoallergenic though if allergies are an issue you should always visit the dog to check how you react. If she has short hair her grooming needs are less, she will need less frequent brushing, she will not need regular visits to a groomer or trimming regularly around the eyes. Long-haired Malchis will need all of that. Brushing should be done with a firm bristled brush and done daily. She is a moderate shedding dog so you will need to vacuum often too. The short-haired version will need less bathing too, and be sure to keep baths to when they need it as bathing too frequently can affect the natural oils in their skin. Nails will need trimming if they get too long, this is something the groomer can take care of if you do not have experience. Check her ears and eyes every week for infection. Wipe them clean and trim them carefully around the eyes if it gets too long there. Brush her teeth at least twice a week.

She can get along with children and other pets but socialization really helps with that. It is also vital for how she interacts with other dogs. Young children might be best avoided as she is a fragile dog and they can be too boisterous and might hurt her. Older children who have been taught how to play and be careful are fine though.

She can act as a watchdog and bark to alert you if something is up. She does bark quite a bit though so if there are noise regulations where you live this might be a problem. She will need ½ to 1 cup of dry dog food, a good quality, and split into 2 meals a day. She is better at dealing with warmer climates than cold.

To avoid increased odds at getting a sickly puppy or dog buy from a respected breeder and expect to see health clearances. Visit the puppy too so you can see where they have been bred and have an idea of cleanliness there. If a breeder does not want you to visit this is not a good place to buy from. A Malchi can inherit conditions her parents are prone to which include Patellar luxation, hypoglycemia, heart problems, collapsed trachea, hydrocephalus, open fontanel, liver problems, eye problems, shivering, White dog shaker syndrome, and reverse sneezing.

Costs involved in owning a Malchi

A Malchi puppy could cost between $300 to $1000. She will need blood tests, deworming, shots, spaying, microchipping, a crate and carrier, collar and leash, and food bowls. This comes to a possible extra cost of $360 to $400. We say possible because some breeders may offer some of those things included with the puppy price. Annual costs for medical concerns that are not a medical emergency or ongoing illness, for example for checkups, flea prevention, shots, and pet insurance will come to between $435 to $550. Costs each year for other basics such as long hair grooming, license, training, food, treats, and toys come to between $530 to $650.

Looking for a Malchi Puppy Name? Let select one from our list!

The Malchi is a great companion especially for seniors living in apartments or homes with just older children. She has a sassy personality and is very loving and staunchly loyal. She has a lot of heart, she is smart and she will be a joy to own. Just be prepared for some extended time on house training and make sure she is trained and socialized as soon as possible.