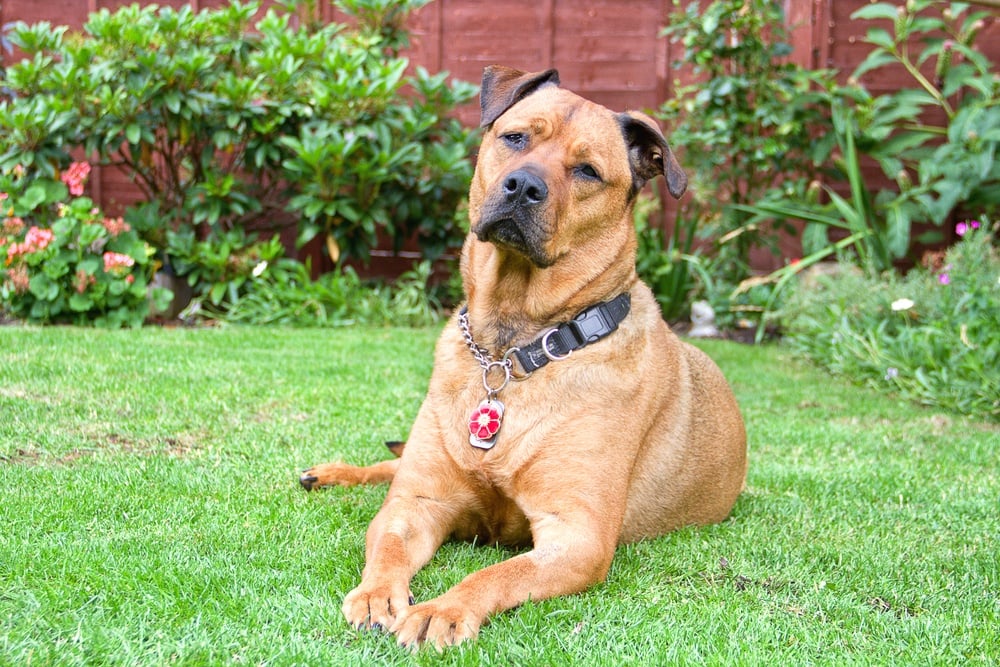 The Mastweiler is a giant cross or mixed breed. She is the pup of a Bull Mastiff and a Rottweiler. Her life span is 10 to 12 years and she is multi-talented taking part in various roles and activities such as police work, guard dog, watchdog, tracking and obedience. She is a happy and confident dog and needs experienced owners.

Where does the Mastweiler come from?

The Mastweiler is a designer dog, one of many in fact, which are mixed dogs that have been deliberately bred. You want to find someone who actually has knowledge and is a good breeder but there are a lot of backyard breeders and puppy mills that see the popularity of designer dogs and breed to make money only. Take care then where you buy from. Because these are dogs are from that first litter there can be a lot of differences in looks and personalities even in the same litter. As with a lot of these dogs we do not have an origin story on the Mastweiler so here is a look at the parents to get a better feel for their background.

The Bullmastiff is not that old, he was bred in the mid 1800s in England and is essentially a cross between the English Mastiff and the English Bulldog. He was most likely bred by gamekeepers who needed a dog who was large, brave and fast to track poachers and hold them down until the gamekeeper caught up. At the time he was also known as the Gamekeeper’s Night Dog and he would work with the gamekeeper then go home with him and be a companion and family dog. When poaching became less of a problem he was then used as a guard dog. It was the early 1900s when he was bred to become a purebred rather than just kept as a crossbreed. He was recognized by the KC in 1924 and the AKC in 1933.

Today he remains a confident and brave dog, clever and sometimes independent but still reliable and obedient when well trained. He will act as your protector and is not only a great watchdog he will also act to defend if there is a threat.

The Mastweiler is an intelligent and loyal dog, very devoted and affectionate to her family and protective too. She has a lot of energy and is very playful and alert. She is a great companion and family dog when she has the right socialization and training. Her protectiveness can turn to aggression which is why the socialization and training are so important. She can be quite charming and loves to spend time with her people, in fact she does not do well being left alone for long periods and can suffer from separation anxiety. She will want lots of attention and she will need lots of outdoor time to stay well behaved.

This is a large to giant dog weighing 80 to 130 pounds and standing 24 to 27 inches tall. She has flappy ears and her coat is straight, short and dense. Common colors are fawn, golden, brown and black. She is a muscular dog, tall, with a deep chest, squared head and long tail.

How active does the Mastweiler need to be?

She is best not in an apartment as she needs room to move around and a yard where she can explore and play is a very good idea. She should be given at least a couple of hours a day of physical activity. This could be in the form of two long walks, some time off leash somewhere like a dog park, joining you for your exercise, or play time. She can jump high so make sure that yard is fenced correctly.

With an experienced owner this is a moderately easy dog to train. It will not need a lot of extra time and effort but it will be gradual. She can be independent sometimes and she needs positive techniques because of her sensitivity. Encourage and praise her, use treats as motivation though watch that she does not get too many as she does like to over eat. Be consistent and fair and also be firm. Early socialization is very important with her, her protective side can turn to aggression without the training and socialization.

The Mastweiler is a dog that can shed a low to moderate amount. She has moderate grooming needs. As well as brushing her every other day to remove dead hair and dirt she will need her teeth brushed at least two to three times a week. She should also have her ears checked once a week for infection and then give them a wipe clean. If her activity does not naturally wear down her nails they will need to be clipped taking care not to cut too low down. Bathing should happen just when needed otherwise you can end up causing her skin to dry out.

With that early socialization and at least basic obedience training she can get on well with children. If they are part of her family she will be more affectionate, protective and playful with them but her size means that the young ones can get knocked over by accident so some supervision is a good idea. The socialization helps her be good with other dogs and with other pets too.

She is a very good watchdog and will act to defend the family if needed. She barks occasionally to frequently so that may need training to control. She should be fed 4 to 5 cups of a good quality dry dog food each day. However being prone to bloat it should be split into at least two meals. It should also be carefully measured to prevent obesity.

There are health concerns she can inherit from her parents such as Heart problems, Bone cancer, Bloat, Hypothyroidism, Eye problems, Kidney and Bladder Problems, Knee Problems, Cancer, Joint dysplasia, Pano, Allergies and Skin Problems. She can also have a sensitive stomach and be prone to ear infections.

Costs involved in owning a Mastweiler

A Mastweiler puppy can cost between $300 to $650. There will be a need for some medical procedures like shots, deworming, micro chipping, blood tests, a physical and spaying. She also needs a collar and leash, food bowls and a crate. These initial costs come to about $500. Annual medical costs assuming there are no major needs come to between $485 to $585. That covers pet insurance, vaccinations, flea prevention and check ups with the vet. Annual non-medical costs come to between $515 to $615 and that would be for basics like food, training, license, treats and toys.

Looking for a Masweiler Puppy Name? Let select one from our list!

The Masweiler is a large dog and she will need some specific things to make a great family dog. Space, plenty of exercise, attention, socialization and training for example are all key to how she behaves and her well being. If you are an experienced dog owner and you are prepared for all of these things she could be a wonderfully loving, devoted and happy family dog.