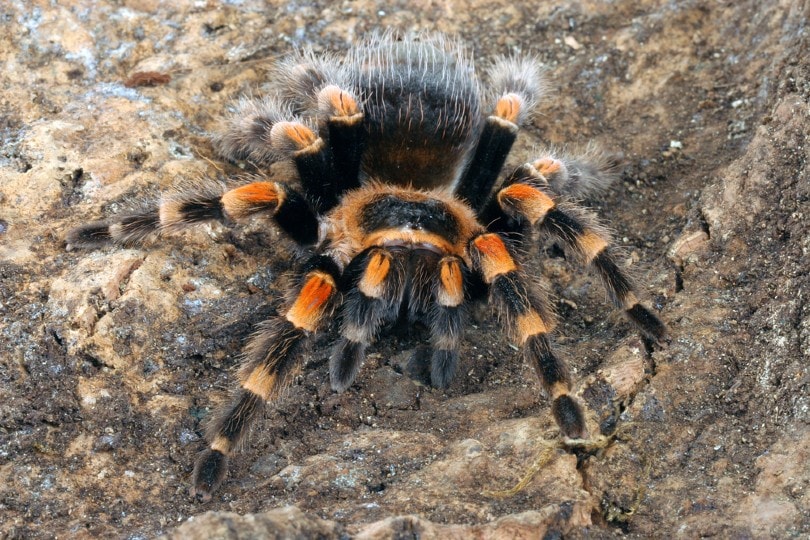 Originating from Mexico and Panama, the redknee tarantula has the traditional tarantula banded appearance. It will grow to a leg span of approximately 5 inches and while females can live as long as 30 years old, males only have a life expectancy of about 10 years.

They are docile, colorful, and they take minimal care and space, making them a popular arachnid pet. Even though they are considered suitable for novice as well as experienced pet owners, they are not the right choice for all prospective pet parents. Read on to see the Mexican redknee tarantula’s requirements.

The Mexican redknee tarantula is a popular arachnid pet because it is docile and quiet, is not prone to running quickly, and doesn’t take too much care or room. It will bite, but only if threatened, and although it is venomous, its venom is only equivalent to that of a bee sting and not fatal. They do, however, eject hairs if they feel threatened. These toxic hairs can lodge in the skin and cause a rash and irritation. Although the toxin is not considered dangerous, it can cause discomfort and owners should be aware.

In the wild, it is most commonly found on the coast of Mexico. It lives in deserts and on mountains, and may also be found living in the trees of forests. It lives alone, burrows to create a safe spot, and it feeds on insects as well as small animals like mice, lizards, and frogs. Its venom initially incapacitates its prey before turning them into an easily digestible liquid. If the spider is fortunate enough to find a large meal, it does not need to eat again for several weeks, sometimes as long as a month. In captivity, most owners feed their slings two or three times a week.

In the wild and in captivity, the redknee tarantula is a nocturnal spider, which means that it sleeps during the day and becomes active at night.

How Much Do Mexican Redknee Tarantulas Cost?

This tarantula is a popular starter spider and it hails from neighboring Mexico. As such, there are quite a lot of them available on the market. You should expect to pay around $150 for a decent example of a Mexican redknee tarantula. You may pay more than this, and because the female can live up to 30 years, you may find abandoned examples in shelters or through rescue groups needing a home.

You will also need the tank and other equipment, but this species does not need lighting and requires only a small amount of space, so the initial setup can be had for around $150.

The Mexican redknee tarantula is prized for its quiet and docile nature. It is one of the calmest tarantulas available. It rarely bites. While it is docile, this breed of slinger can be a little skittish at times, and you should keep your face away from them because their urticating hairs can be highly irritable to the face. They are tolerant of being handled. However, if yours rears its front legs, it does not want to be picked up.

Urticating hairs, also called urticating bristles, are a defense mechanism employed by plants and some small animals. They are similar to the hairs found on nettles and are barbed. If the slinger feels threatened, it will fire the hairs at its predator, and they become lodged in the skin or eyes, causing considerable discomfort. These hairs can be especially painful if you get them in your eyes or inhale them, so you should keep the spider away from your face and learn to read the signs if it does not want to be handled.

The breed can grow to have a leg span of up to 7 inches, although 5 inches is more common. Although females tend to be larger than males, this isn’t always the case, and the most reliable way to tell the sexes apart is by checking the palps. These are appendages near the mouth. The male has large palps with bulbous ends, while the female has long and thin palps. It is important to know the difference because there is a considerable difference in life expectancy between the male and female.

How to Take Care of Mexican Redknee Tarantulas

The Mexican redknee tarantula is a popular spider because it requires minimal setup and it has a low cost of entry to keeping one. With that said, it does have certain requirements that must be met.

It is advised that you provide this species with a minimum 10-gallon tank, but a 20-gallon model would be better, where the room is available. This will allow your spider plenty of room to move around and give her distinct hide, feeding, and other spaces in their living area. The tank doesn’t need to be anything special, but it should have a locking lid and should not have any holes or areas that would provide an easy escape.

This tarantula hails from semi-arid desert regions and prefers a substrate that is 50/50 sand and peat. Potting soil can be used in place of peat and you can incorporate a small amount of bark chips. Tarantulas are burrowing animals so you will need to provide a good amount of substrate, to approximately half the depth of the tank itself.

Aim for a temperature between 75° F and 80° F, ensuring that the temperature does not fall out of this range. Use a thermostat, if possible, to maintain temperature throughout the day and night. Humidity should always be above 55% and ideally between 65% and 75%. This isn’t a difficult level to achieve and can usually be reached using a decent water bowl and occasional misting.

Although your tarantula does not need additional lighting, the species is unusual because it will not only tolerate it but may actually enjoy basking. If you do provide a basking light, ensure that your spider’s hide remains dark and that the light does not alter the humidity of heat level outside acceptable levels.

You will need to provide a water bowl, offer a hide at ground level, and maybe offer some plastic plants to brighten the place up, although this is only for your benefit.

Do Mexican Redknee Tarantulas Get Along with Other Pets?

The Mexican redknee tarantula will not get along with other pets. If it feels threatened, it will use its urticating hairs that can prove very painful for other animals. Also, while the tarantula’s bite is equivalent to a bee sting to us, it can prove more harmful to small animals. The tarantula will not do well when kept with other spiders, either, and you should only keep one in each terrarium to ensure happy and healthy spiders.

What to Feed Your Mexican Redknee Tarantula

In the wild, the spider would eat insects like crickets, but it would also eat small animals including mice, frogs, and even some small lizards. In captivity, the tarantula will eat an insectivore diet consisting primarily of crickets but also additional insects like roaches.

Mealworms and waxworms can also supplement their food. Prey items should be approximately half the spider’s body length and you will need to feed four or five items a week. Anything that is not consumed within 24 hours should be removed.

Tarantulas do molt. They grow a new skin under their exoskeleton and when this is nearly fully grown, they will need to shed their old skin to allow the new skin to emerge. Your spider may lay on its back during the molting process, and you should not disturb it.

Tarantulas are hardy creatures and they will rarely get ill. However, they can suffer physical injuries if they fall from too high a level. They can also become dehydrated, evident by a shrunken abdomen and listless behavior.

Breeding is the only time that two tarantulas should be placed in the same enclosure, and only when they are both ready. The male will make a sperm web, which is a web that is open at both ends. He will crawl underneath the web, upside down, and deposit a droplet of seamen.

When your male does this, you can place him in the female’s enclosure. He will approach the female’s hide, tapping his feet to attract her out. When she emerges, the male will pounce. When he disengages, you should remove him from the enclosure straight away. The male will die within a few weeks, while the female will produce an egg sac that can contain hundreds of eggs.

Are Mexican Redknee Tarantulas Suitable For You?

The Mexican redknee tarantula is considered a good first spider and it is a suitable spider for novice owners because it requires little space and minimal care and while it is venomous, the bite is only equivalent to that of a bee sting.

Do be prepared for the fact that a female tarantula can live for three decades, however, and ensure that you provide the right level of heat and humidity to ensure that your spider is comfortable and has a healthy life.