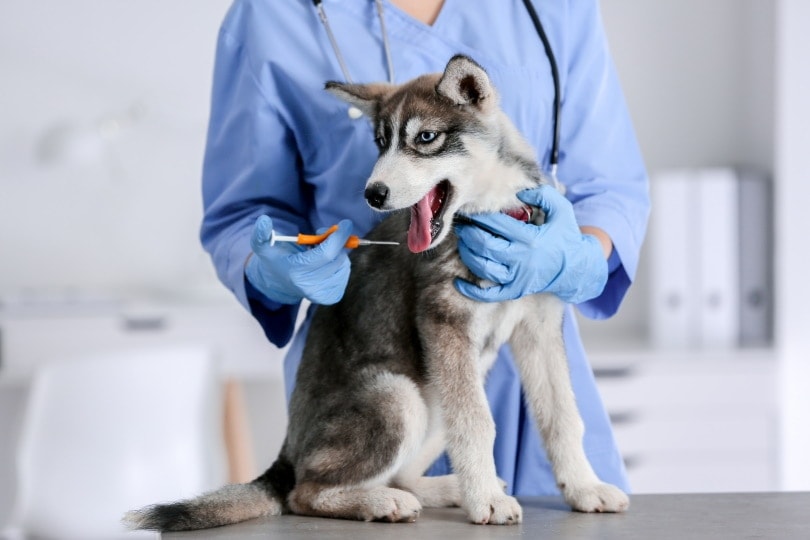 If you’ve ever owned a pet, then you know that there are a few things that you’ll be strongly pressured to do for them: Get them spayed or neutered, switch to a high-quality food, and brush their teeth regularly. You’re also told that you should have them microchipped too.

While the first three are undeniably good things, what about microchipping? Is it really as valuable as many people say? Are there any risks involved?

We’ll answer all those questions in this guide.

What Exactly Is Microchipping?

A microchip is a tiny device — about the size of a grain of rice — that’s implanted just underneath your pet’s skin (usually between the shoulder blades). The electronics are housed inside a bio-glass sleeve, which is completely safe for both pets and humans.

When viewed under a special scanner, the chip emits a radio frequency that reveals the name of the microchipping agency, along with a special number.

If a vet, animal control officer, or the like calls the agency and gives them the number, they’ll find your information and contact you to let you know that your lost pet has been located.

It’s important to note that this only works if you register the microchip with the agency. Otherwise, they won’t have your information, and they’ll have no way to reach you.

The Pros of Microchipping

As you might expect, given how strenuously microchipping is pushed on pet owners, there are quite a few benefits to microchipping. Let’s start with the most obvious.

This is the primary purpose of microchipping. If your pet gets lost and someone takes them to the vet or the pound, they can get scanned while there. The scan will allow them to get in touch with you to let you know that your pet has been safely located.

It’s important to understand, though, that a microchip is not the same as a GPS transmitter. It won’t help you track down your pet if they get lost; it will only allow a vet or animal control officer to get in contact after your pet has been found.

Microchips can last as long as 25 years, so you should only need to install a chip once in your pet’s life. A few lucky pets do live past 25 years, of course, but those animals usually aren’t in any shape to go running off.

Installing a chip takes only a few seconds, and your pet shouldn’t feel more than a slight pinch. There’s no need to hold them down while they struggle, and you don’t have to worry about them being sore or having lingering pain from the procedure.

One of the other popular ways to ensure that your pet can be identified is tattooing a number on their skin. This serves the same purpose as a microchip, but the procedure is much more painful and requires you to struggle with your pet until it’s finished.

Regular tags can get lost or broken, especially if you have an outdoor pet that enjoys getting into mischief. If your pet gets lost and their tags are gone, the authorities will have no way to contact you if they find your animal.

A microchip, on the other hand, will always be safely implanted in your pet, ensuring that they can be safely returned to you.

Most microchip databases are national, so if your pet gets lost and crosses state lines (or if they get lost while you’re moving), you can still get reunited with your best friend.

Each country has its own database, though, so it may not help if your pet crosses the border.

All you have to do is have your vet implant the chip and fill out the accompanied paperwork so your information will be in the national database. That’s it: A few minutes of work and your pet will be protected for life.

A dog tag might reveal your name, address, and phone number, so if your pet gets found by someone disreputable, it could put your identity at risk. A microchip, on the other hand, only reveals a number that will be meaningless to everyone but the microchip company.

The microchip company will be the only party with access to your personal information, so you don’t have to worry about it falling into the wrong hands.

If your pet is stolen, the thief can remove the ID tags and any other identifying information. They can’t get to the chip, though, so if you can get the animal scanned, you can prove that you’re the rightful owner.

The Cons of Microchipping

While microchipping clearly has multiple advantages, it’s not without a few drawbacks. We’ve listed the main ones, so it’s up to you to decide if the rewards are worth the risks.

Most vets will perform a broad scan just in case, but it’s always a good idea to have your pet scanned every time you take them in for a checkup, just to make sure the chip is where it’s supposed to be.

A microchip isn’t a GPS transmitter, so it won’t help you track down your pet in the wild. You can buy a collar with a GPS tracker in it if you’re worried, though, and the microchip will still come in handy if your pet gets located by someone else.

Some pets have negative reactions to the chipping procedure, but these reactions are almost always minor and temporary. Inflammation at the insertion site is the most common, but there is also a minuscule risk of cancer developing at the site as well.

The link between microchipping and cancer is far from proven, however, and there have only been 4 reported cases out of over 4 million microchipped pets. This could very well be a coincidence, but we mention it so you can be fully informed as to the risks involved.

The Costs of Microchipping a Pet

Microchipping is a relatively inexpensive procedure, especially considering the benefits involved. However, that’s not to say that there aren’t any costs involved.

If you have the procedure performed by your vet, it will most likely cost you between $40 and $50. However, some of that will likely be due to the cost of an office visit, so you might be able to save money if you have the chip implanted while you’re there for another reason, such as a routine checkup.

You might be able to have the chip implanted more cheaply by a rescue group or an animal shelter, so if money is an issue, it’s worth shopping around beforehand.

Also, if you adopt from a rescue group or animal shelter, your pet may already be chipped. That will save you some money (if it’s not included in the adoption fees), but it’s essential that you switch the registration information with the microchipping company so you are contacted instead of the previous owner.

Will You Have Your Pet Microchipped?

Microchipping a pet is quick, easy, and relatively inexpensive, and the benefits usually outweigh the risks. We’re big fans of it, but the decision is still a personal one, so you should give it a bit of thought before you march your pet into your vet’s office.

Keep in mind, though, that there are few things as gut-wrenching as losing a beloved family pet, so if a microchip can keep those feelings at bay, it’s likely worth every penny.