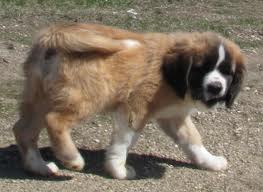 Where does the Mini Saint Bernard come from?

The Mini Saint Bernard is an American bred designer dog, created for people who like the look and temperament of the Saint Bernard but didn’t want such a large dog. The idea was to create a mixed breed that took up less space, took less maintenance, cost less, drooled and shed less. While the Cocker Spaniel and Saint Bernard is one of the more common methods to get a Miniature Saint Bernard breeders vary in the genetic mix they use. Some have English Shepherd, Peke or Ori Pei for example though in general all have at least 50% from a Saint Bernard. This means Mini Saint Bernards can vary in looks and temperament so when looking make sure you get a mix you are happy with and that you use a reputable breeder. Here is a look at the two parents breeds and what they bring to this designer dog.

The Saint Bernard is a Swiss dog and it is thought they are a result of crossing native Alp dogs with Mastiffs the Romans brought with them. He gets his name from an alpine pass in the Alps called The Saint Bernard Pass which is dangerous to cross. Because of the danger a hospice was built there to help travelers and the dogs were used to guard the grounds. They were also used to guard the monks when they went out to locate travelers who needed help. Their location and job led the breed to being able to withstand harsh weather conditions and able to carry out search and rescue. Despite over 300 years of rescuing people they did not have an official name until 1880.

Today he is a friendly dog, steady in temperament and kind. They do love to get attention but will not be as demanding for it as some breeds are. He is kind and good with children despite his size. He does have a stubborn streak and early socialization and training can help iron that out.

The Cocker Spaniel comes from a Spanish line of dogs, and was named for his ability to hunt woodcock. It was not until 1892 that he was recognized as a breed in England. In the 1870s he came to America where he grew in popularity and there became a division in English Cocker Spaniels and American Cocker Spaniels.

A Cocker Spaniel today when well bred is affectionate and sweet and loves to cuddle. He also likes to be in the center of any family activity and loves to play. He enjoys being active and is alert but he also quite sensitive and does not do well when treated harshly. He does have an aggressive side to him though and can snap especially if he is in pain or scared. Early socialization is important.

The Mini Saint Bernard is a friendly and social dog who enjoys being with families in a house with more than one person. He is intelligent and as long as you are the clear leader he will submit making training quite easy. He gets on well with children, can be playful and energetic though unlike the Saint Bernard he plays with his front paws not his mouth. He also loves to show his toys to his family. He is gentle and loving and very loyal. He does have a stubborn side though and can be anxious so early socialization is important. He does not like being left alone and is wary of strangers making him a good alert watchdog.

The Mini Saint Bernard is a medium sized dog. The smaller size weighs between 15 to 35 pounds and stands 12 to 16 inches tall. The larger size weighs 40 to 60 pounds and stands 16 to 20 inches tall. He is a muscular dog with a small head that looks like a Saint Bernard, a shorter muzzle and flappy ears. His coat can be straight but if left to grow longer it becomes wavy. It is dense, harsh or silky depending in which parent his coat leans more towards. Common colors are black, white, tan, brown and red.

How active does the Mini Saint Bernard need to be?

He is a fairly active dog who will need regular exercise and mental stimulation to keep him well behaved, happy and healthy. These mixed breeds actually have more energy and need more exercise than the purebred Saint Bernard. He would enjoy a couple of long walks a day, trips to a dog park, some off leash play time, and a bonus would be to have a yard he can play in. He is not a fast or agile dog. He can adapt to apartment living with enough daily exercise. Also keep in mind as a puppy he should be given shorter amounts of physical activity and then when he is older than two years he will have the endurance more for the longer walks.

He is intelligent, he likes pleasing his owner and he usually listens when given a command. This means he is mostly easy to train, he may even train more quickly than some other dogs. He does have a stubborn side though so you have to be gentle, positive but firm. Be consistent in your training too. Start as young as you get them, the earlier you train the easier it goes. Early socialization and training are important for the Mini Saint Bernard as he can sometimes have anxiety issues, and the Cocker Spaniel in him may make him snappy when he feels threatened.

Living with a Mini Saint Bernard

He has moderate to high needs with maintenance and grooming. He will need to be brushed and combed daily, especially if allowing the coat to grow. You will probably need to take him to a groomer to take care of it. Bathing should be done as needed. He does shed between a minimal and moderate amount, less than a Saint Bernard though. Shedding will worsen during the Spring and Fall. He will need his ears checked and wiped clean once a week, wiping under his eyes as they produce a lot of moisture, and his teeth should be cleaned at least twice a week. Also his nails will need clipping if they get too long, again this may be something you ask a groomer to do as dog nails have life blood vessels and nerves in them.

The Mini Saint Bernard is good with children, he plays with them, is gentle and affectionate towards them. Socialization and training are important to help with this. He is also good with other pets and dogs.

He is alert and will bark to let you know of intruders so is a good watchdog. He is not especially protective and is unlikely to actually scare anyone off though. He will need 1 1/2 to 3 cups of dry dog food a day of good quality split into at least two meals. He is not a constant barker, in fact he rarely barks.

Issues that the parents are prone to can be passed on to mixed breeds. In this case those issues include
Eye problems, epilepsy, heart problems, bloat, AIHA, hypothyroidism, skin problems, joint dysplasia, allergies and patellar luxation. He does not have any known issues specific to his mixed breed but being fairly new that does not mean there is not anything, just that we have not seen it yet. To get a dog with better chances at being healthy and living a long and full life buy from a good breeder and ask to see health clearances.

The Mini Saint Bernard can range in price for a puppy, from $800 to $1500 currently. He will need blood tests, chipping, deworming, neutering, vaccinated, a collar and leash, crate, carrier and some other basics. Some of these things might have bee included with the price of the puppy. If not the sum of these costs will be between $455 to $500. Recurring basic medical costs each year for pet health insurance, flea prevention, check ups and shots come to $460 to $600. Recurring basic other costs for things like toys, food, treats, license and training come to between $400 to $550.

Looking for a Mini Saint Bernard Puppy Name? Let select one from our list!

If you love Saint Bernards but cannot handle or afford their size than the Mini Saint Bernard is a great alternative. While not exactly the same in both looks or temperament they are close. With this choice you get a dog who is easy to train, is social and alert and a joy to have.