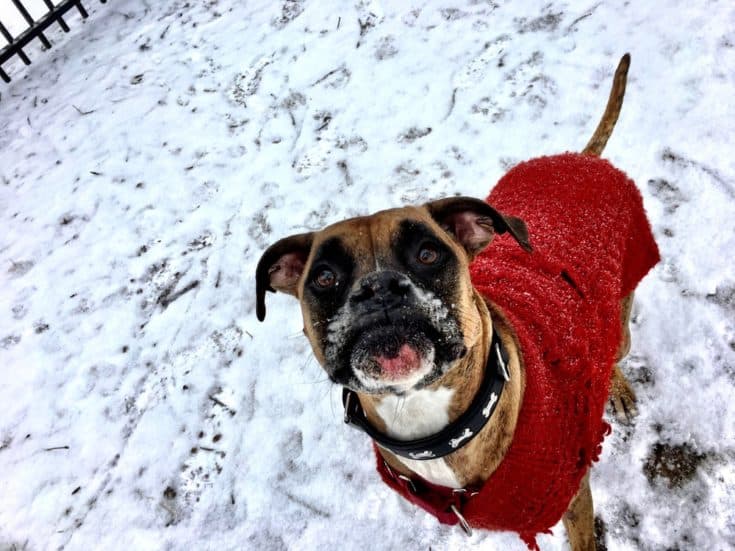 The Miniature Boxer is a mixed or crossbreed but there are several ways breeders create them. This article focuses on what could arguable called the most honest mix, a cross between the Boxer and the Boston Terrier. She is medium sized dog with a life span of 12 to 15 years. She is a very popular mixed breed in the U.S mainly because she gives you the looks and personality of a Boxer but smaller which means she is easier to take care of and can suit apartment living. She is a calm and devoted dog who often takes part in guarding.

Where does the Miniature Boxer come from?

The Miniature Boxer is a designer dog that comes in several versions. There is the Boxer x Boston Terrier, the Pug x Boston Terrier, the Pug x Rat Terrier and the Pug x Fox Terrier. If you want genuine Boxer in your miniature Boxer you should look for the version this article is focused on. Breeders have done this thinking to make money and to just breed a dog with the appearance but smaller of a Boxer. But many people want their Miniature Boxer to have more than just size and looks going for them. Interestingly there are breeders working on developing a new purebred that will have at least 50% Boxer.

There is no origin or history to be found that tells us anything about the first breeding of the Miniature Boxer so we look to the parent breeds for some temperament and characteristics.

The Boxer was bred in Germany in the late 1800s and comes from hunting dogs. In 1903 he came to the US and in World War I the Boxer was used by the US army as guard dogs, messengers, pack carriers and attack dogs.

Today he makes a good watchdog being alert and watchful. He is an amusing mix of being dignified sometimes and then clown like other times. He is good with children being patient and happy to play with them. He does still have some aggression but it only really shows when he feels he has to protect his family. He has a lot of energy and is usually easy to train but he can have a stubborn streak. He does not do well in either extreme temperature.

The Boston Terrier came about in the late 19th century in Boston, America. His background is not exactly known. At the time he was not called a Boston Terrier but had a variety of names such as round headed terriers, bullet heads, Boston bulldogs and American terriers. In 1889 the American Bull Terrier club was founded who then changed their name to the Boston Terrier club. He was one of the first non sporting dogs to be bred in America. At first how he looked was not considered important but a standard was eventually agreed upon in the 1900s.

Today he is lively, affectionate, clever and has an even temperament. He can have a stubborn streak though and training needs patience and consistency. He is also quite sensitive so positive training methods are a must. He does have a tendency to snore and drool and male Boston Terriers are more defensive of their territory.

The Miniature Boxer is a great family dog, outgoing, great with kids, calm and devoted to her family and owner. She is very affectionate too and protective. Usually a well bred Miniature Boxer has a calm and gentle disposition and while they can act as guardians they tend to be non-aggressive otherwise. She is not trusting when it comes to strangers and is a good watchdog. She can have some curiosity that she inherits from the Boston Terrier and she also has a tendency to follow you around the house so if you think you will feel annoyed by that she is not the dog for you! She does have a stubborn side but this can be smoothed out with early training.

She is a medium sized dog weighing 25 to 55 pounds and measuring 15 to 22 inches tall. She should look like a boxer but be smaller. She has a square jaw, floppy ears, an under bite, deep chests and muscled legs. She is smaller but still powerful looking. Her nose is usually black and she has almond shaped dark eyes. Her head is rounded and she has a short muzzle. Her coat is fine, hard, short and smooth and common colors are white, red, silver, black and brown. First generation Miniature Boxers tend to be on the heavier end around 50 pounds. If a breeder has been working for longer on his breeding he will have produced smaller dogs each generation.

How active does the Miniature Boxer need to be?

She still loves to hunt and is happy to go hunt birds or rabbits if that is something you like to do. She is still a fairly active dog even though she is smaller. She tends to be more high energy in her first 6 years and will need longer walks and more vigorous activities like play, trips to the park and so on. After 6 she will need a bit less, a couple of short walks for example. Exercise both physical and mental are important for all dogs at varying degrees to keep them happy, healthy and well behaved.

The Miniature Boxer is moderately easy to train. She will not need a lot of extra effort but nor will she be quick and easy like a few breeds. She will listen to you but she can be stubborn and strong willed so there may be times when she just does not want to do it or she feels she knows a better way! Stay patient, only use positive training methods only, be consistent and firm. If you are clearly established as the pack leader she is less likely to try and dominate you. Early training and socialization are important to help her get on better with other dogs and to minimize the small animal hunting in the yard if that is something you want to control. It also helps develop her into a well rounded adult dog.

Living with a Miniature Boxer

She has moderate needs when it comes to maintenance. Her grooming is fairly simple as her coat is easy to brush. You should brush daily or every other day. Her shedding can vary from minimal to moderate so there may be some clean up to do after her with a vacuum cleaner. She should have her ears checked and wiped clean once a week. Use a cotton ball and some ear cleaning solution and remember as with humans you do not insert anything into the ear canal. Clipping her nails when they get too long is another job to cover but this one may need some preparation or passing on to a professional. Dogs have blood vessels and nerves in the lower part of their nails so care has to be taken. She will also need her teeth brushed two to three times a week at least and a bath just as she needs one.

With training and socialization she is a great dog for children, other pets and even other dogs to some degree. She will be gentle with children and play with them, protect them and be affectionate towards them. She does have an inclination to hunt and hold down small animals in the yard or when she is out. If you socialize her with other small animals when she is young that can be controlled but if you have other pets like cats she may chase them. She also needs socialization to be able to deal with strange dogs.

The Miniature Boxer is an alert dog so she makes a good watchdog who will alert you to an intruder. She will need to be fed 1 1/2 to 2 1/2 cups of high quality dry dog food each day, split into at least two meals. She rarely barks and is not good in very hot or very cold climates.

Since she has only been around for a few years there are no specific health issues known to her yet. There are issues her parents are prone to though that she might also be at risk of such as Cancer, heart problems, hypothyroidism, bloat, deafness, eye problems, patellar luxation, Hip dysplasia, Demodicosis, allergies, Megaesophagus and reverse sneezing. To have the best chance at a healthy puppy who grows into a healthy dog ask to see health clearances when buying and only buy from trustworthy breeders.

The average cost for a Miniature Boxer puppy falls between $450 to $2000. With some breeders there are some things included with that price otherwise you will have to take care of them yourself. They include micro-chipping, spaying, blood tests, shots, deworming and she will also need some basics like a crate, carrier bag, bowls, collar and leash. These costs come to somewhere between $455 to $500. Annual basic medical costs for pet insurance, general check ups, flea prevention and vaccinations come to between $460 to $600. Annual basic costs for other things like food, toys, license, training and treats come to between $455 to $600.

Looking for a Miniature Boxer Puppy Name? Let select one from our list!

This dog is sensitive and she can be clingy so you need to be prepared for that. She will need you to include her in family activities, offer her lots of attention and affection, take her for a moderate amount of exercise and stay positive when training. She will become an important and loving member of your family very quickly.