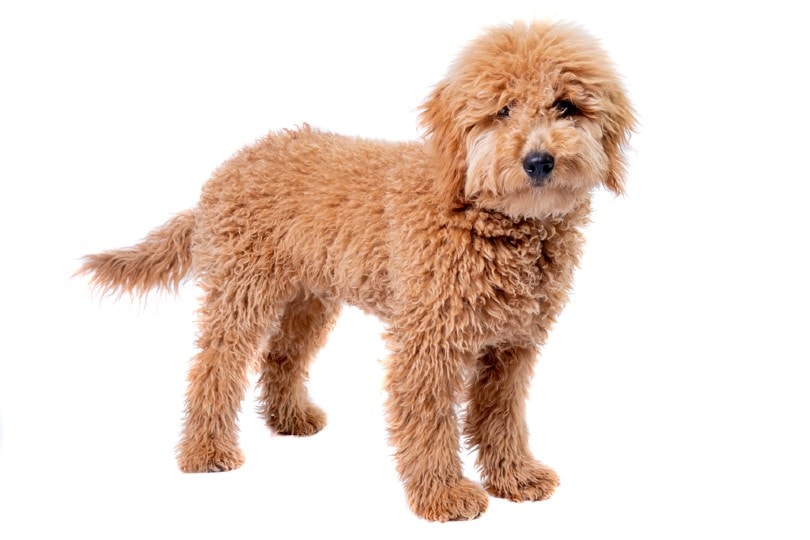 Where does the Miniature Goldendoodle come from?

The Goldendoodle was first bred in the 1990s and at its original size is a mix of the Golden Retriever and the Standard Poodle. Breeders thought this would be another popular Poodle mix combining the friendliness and gentleness of the Retriever with the smarts and coat of the Poodle. They were correct and this has become one of the most popular designer dogs at whatever size. As a result the prices range quite a lot and care needs to be taken over what breeders you buy from.

Here is a look at the two purebreds involved to get a feel for what the mix might be like.

The Poodle is a very old breed, at least a couple of thousand of years old. He comes from Germany and was used as a waterfowl retriever for hunters. When he came to France he was bred further into something more distinct and closer to what we know today. There were and still are three sizes of Poodle, a standard, the miniature and the toy. The French continued to use the standard for hunting waterfowl, they used the miniature to sniff for truffles in the woods, and the toy became a favorite companions French nobility carried around with them. The unusual cuts and decoration for their fur was copied by the French when the Poodle was taken in to the circus as a performer and they gave him some unique trims.

Today the Poodle is a clever and popular dog with an appearance of aloofness that really hides a goofy clown when you get to know him. He is very loyal and playful and loves people. He is eager to please, easy to train and has a calm nature. He tends to be protective and has a very good memory.

The Golden Retriever was bred when a Lord Tweedmouth in Scotland wanted a dog who was more even tempered, loyal and attentive but still an excellent retriever of waterfowl. He was bred in the late 19th century but was not officially named until 1920. He was recognized in America in 1932 and became one of the most favorite purebreds.

Now this dog is a great family dog, eager to please, intelligent and loves to be with people. He has a great disposition and is a devoted pet, great with children and pets. They can be boisterous in a bumbling kind of way and love to eat so watch them gaining weight!

The Miniature Goldendoodle is a very affectionate and friendly dog. He is gentle, loving, social and quite perceptive too. He loves to cuddle and get lots of attention and likes to be with you wherever you are. He is very happy and seems to love life. He is sweet but also has energy, is playful and has his moments of craziness. He is a smart dog too but prefers not to be left alone for long periods and can suffer from separation anxiety.

This is a small to medium dog weighing 20 to 45 pounds and standing up to 19 inches tall. He has a dense and soft coat that is wavy to curly and is medium in length. The hair in his face is shorter, and then on the tail, ears and legs it is longer. Colors are typically cream, golden, white, red, apricot, grey, copper and black.

How active does the Miniature Goldendoodle need to be?

The Miniature Goldendoodle is fairly active so while his size means he is fine as an apartment dog without needing a yard, he still needs daily walks of at least half an hour a day. That would be on top of indoor play time and opportunities to run off leash at dog parks or the like. If there is a yard that would be a bonus place for him to let of some energy, sniff around and play. He enjoys running, walking, swimming, jogging and the doggy games most dogs like.

This is an easy dog to train as he is inclined to listen, he is eager to please, intelligent and will need less repetition than some. Usually they are also easy to house break. Just be sure to use positive rather than negative techniques. Reward rather than punish, offer praise, treats and encouragement rather than scolding. Early socialization and training are important to see him become the best dog he can be, one you can trust and rely on to obey you when it is important.

Living with a Miniature Goldendoodle

There is some grooming needed. He sheds a low to moderate amount so could be a good option if you do not want to have to do a lot of cleaning up after loose hair. The coat will need regular brushing though as it tangles easily and a professional groomer will need to tidy it up every couple of months at least. He can be hypoallergenic though this should be confirmed before you buy one if that is a high priority. Give him a bath just when he is very dirty so that you avoid over bathing him as that can dry out his skin. For the same reason only use a dog shampoo. His nails will need clipping when they get too long and as you do not want to cut through the quick this should be done by someone with experience. His ears need to be checked for infection and wiped clean once a week. His teeth should be brushed two to three times a week.

A well raised and socialized Miniature Goldendoodle is a great dog around children, other pets and other dogs. He is playful and affectionate, gentle and patient. Children, especially young ones, should be taught how to be careful around animals and how to pet and play with them safely.

Miniature Goldendoodles are good watchdogs. He will bark to alert you of any intruder and can also act in a protective manner should he perceive a genuine threat. Otherwise he barks rarely to occasionally and will needs to be fed 1 1/2 to 2 cups of good quality dry dog food a day which is split into two meals.

For more chances of having a healthy puppy and dog buy from good breeders, visit the puppy before buying and ask to see health clearances for the parents. Avoid puppy mills and backyard breeders. Issues the Miniature Goldendoodle is prone to include PRA, Von Willebrands, Bloat, Patellar Luxation, Hypothyroidism, Ear infections, Joint dysplasia and Allergies.

A Miniature Goldendoodle puppy could costs anywhere from $1000 to $2200. They are popular and this pushes up their price. Other costs for initial medical and basic needs like blood tests, neutering, micro chipping, shots, deworming, a check up, crate, carrier, collar and leash come to between $455 to $500. Annual medical costs for just things like flea and tick prevention, vaccinations, check ups and pet insurance come to between $460 to $560. Annual non-medical costs like treats, toys, food, grooming, license and training come to between $680 to $780.

Looking for a Miniature Goldendoodle Puppy Name? Let select one from our list!

The Miniature Goldendoodle is a great option for people who like the Goldendoodle but want a smaller dog. He has a great mix of purebreds and is a joy to have around. While he is not overly active he will need owners who can take him out for at least a couple of walks a day. Also be prepared for a dog who bonds closely and prefers to not be left alone.