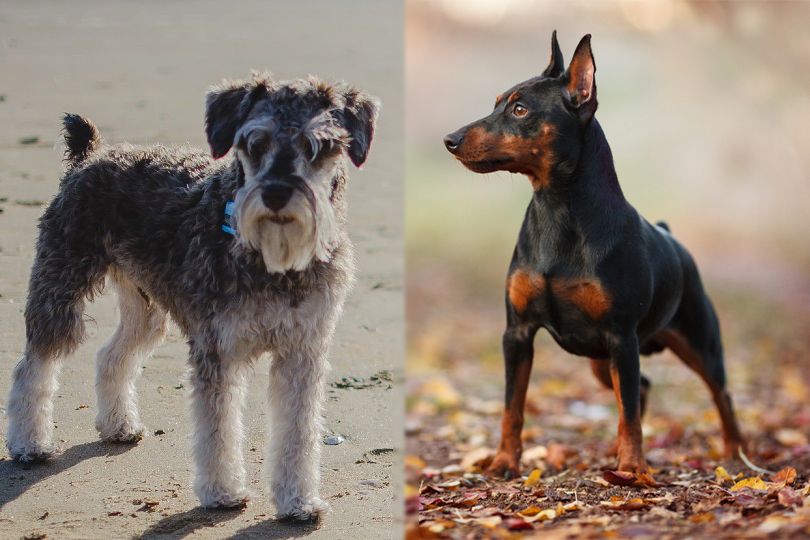 Where does the Miniature Schnaupin come from?

The Miniature Schnaupin is a mixed or cross breed sometimes also referred to as a hybrid or designer dog. While mixed dogs are not a new thing the idea of creating the first generation with purpose and that first litter being the intended outcome is something that has become popular over the last 50 years. It is in the last decade though that this type of breeding has really seen a rapid amount of growth and increase in popularity amongst dog owners. There needs to be care taken when buying any dog like this is a lot of bad breeders and puppy mills are using it to make money. Unfortunately many of these dogs have no known beginnings so we have to look at the parents to get a better feel for them.

In late 19th century Germany the Miniature Schnauzer was developed from the Standard Schnauzer and small dogs like the Miniature Pinscher, Affenpinscher and so on. It was used to catch vermin like rats on farms, to be a good guard dog and to help hunt smaller prey. Despite the two world wars having quite a negative impact on dog breeding in Germany in general in fact the Miniature Schnauzer managed to maintain its popularity.

Today the dog we know as a Miniature Schnauzer is quite different in appearance to that dog in the late 1800s. He was a lot more colorful then but today the most popular colors are black and silver. He is a social dog, likes to be at the center of activity and can be quite feisty. He likes to be near you all the time and you will have to get used to feeling him touch some point of you throughout the day. He is intelligent though and training goes well despite his willful side.

The Miniature Schnaupin is a very outgoing and social dog. He loves to play and he has a lot of energy and spirit. He is alert and is wary of strangers until introduced. He is very happy and friendly usually though he does need socialization to get on with everyone. He is certainly a loyal and clever dog but he can be a handful as he does have a willful side.

He is a small dog weighing 10 to 20 pounds and standing 12 to 14 inches tall. He has flappy ears, a sturdy body and his coat varies depending on what parent he is more like. It can be short and smooth but it also can have a wiry top coat with a softer under coat. Common colors are blue, black, white, silver, red, brown and fawn.

How active does the Miniature Schnaupin need to be?

Being a small but energetic dog it can live in an apartment but is best with somewhere with room and a small or larger yard. He is very agile and if he does not have access to a yard to spend time playing in he will need at least two walks a day if not more. Make sure he is kept leashed or he is likely to run off after something. Trips to a dog park are a very good idea even if he does have a yard, it gives him the opportunity to improve his social skills, run off leash safely and play with you!

The Miniature Schnaupin is a smart guy and is moderately easy to train. However most have an independent side to them that means things are not always straightforward! He will need owners with experience who can be firm but patient still. If his owner is not clearly dominant he can be a lot harder to control and he will think he is the boss. Use positive and consistent methods in the training and be prepared for a difference between the males and females. Sometimes the males are a bit harder to housebreak. Socialization is very important and should be begun as soon as you have him home.

Living with a Miniature Schnaupin

Most Miniature Schnaupin are fairly easy to maintain as they tend to be low to moderate in shedding and grooming needs. He should be brushed a couple of times a week just to keep it looking good and to get rid of debris and move the healthy oils in his skin around the body. Bath time should not be overly scheduled. Go by whether he really needs a bath or not as too often can lead to skin problems when the skin oils are dried out.

He will also need his nails clipped when they get too long, by someone familiar with dog nails as if you cut down too far this will hurt them and cause bleeding. He also needs his ears checked once a week for infection and then given a wipe clean. There are ear cleansers you can use but do not insert anything into the ear. His teeth too need taking care of, a brush at least twice a week if not more is best.

This dog does need good socialization to improve how he gets on with children, other dogs and other pets. With it he can be playful and affectionate with children though he does best with older children. Small children should be supervised and taught how to touch and play with him in a away he is happy with. With other dogs socialization can help him be less territorial or dominant and helps somewhat with his instinct to chase other animals.

He is alert and wary so he is likely to be a good watchdog that barks to let you know when someone is approaching or trying to get in. He is not though likely to act in your defense. He should be fed ¾ to 1 1/2 cups of good quality dry dog food a day split into at least two meals.

There are health issues he can inherit from either parent. They include Eye problems, Legg-Calve-Perthes, Epilepsy, Hypothyroidism, Patellar Luxation, Urinary Stones, Myotonia Congenita, Von Willebrands, Congenital Megaesophagus and Obesity. Visit the puppy before you buy to check on his health and the place he was bred in. Also only buy from a good breeder and ask for a look at health clearances for both parents.

A Miniature Schnaupin puppy can cost between $250 to $450. Prices vary depending on who you buy from, where you are and what might be included with the price. There are initial costs too for medical concerns like blood testing, an examination, deworming, micro chipping, neutering and shots. These come to about $300. Other initial costs like a carrier, crate, bowls, collar and leash may start at a cost of $200. Annual medical costs such as pet insurance, flea and tick prevention, more vaccinations and check ups come to between $460 to $560. Annual non-medical costs for feeding your dog, dog treats, a license, basic training and other miscellaneous things come to $375 to $475.

Looking for a Miniature Miniature Schnaupin Puppy Name? Let select one from our list!

For someone wanting a small but energetic and happy dog the Miniature Schnaupin could be the one for you. He will need socialization though and a firm owner so that he does not develop small dog syndrome. He is affectionate and loyal and a joy to have in the home.