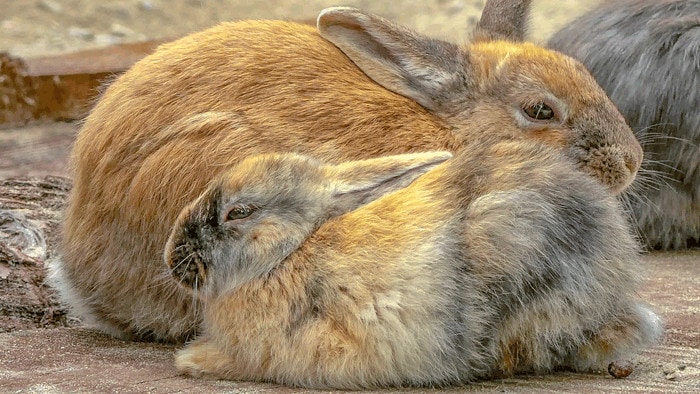 However, don’t stop reading here. There are some important considerations to be made when pairing rabbits of the opposite gender, which we will go into in this article.

Regardless of gender, if you’re pairing up your rabbit you need to make sure it gets on with its’ new friend. Especially if they are in confined spaces such as rabbit hutches. Below we’ve listed some considerations to be made when mixing male and female rabbits.

It’s important to consider the young age in which rabbits can start breeding. This can often be as early as 3 months old, and for males even younger. For most breeds, they continue to grow and mature even after reaching full sexual maturity.

If rabbits reproduce at an early after, their growth can be affected. In some cases, rabbits who have reproduced very early have not reached their maximum adult size. It’s worth noting that this wouldn’t affect their offspring size.

Enough about rabbits breeding and their offspring. What we are trying to emphasize is that rabbits can start breeding really early on. This means that if you have a male and a female rabbit, this is the first obvious concern. The only real way to prevent this from happening is neutering which takes us on to our next section.

The RSPCA strongly recommends neutering both of your pet rabbits. Neutering them can cut the risk of diseases targeted to rabbits’ reproductive organs such as cancers.
However, along with the potential health benefits, neutering your rabbits will also benefit them as companions.

So, as we said mixing male and female rabbits can form a great partnership. However, this is providing that both rabbits have been neutered. This is especially true in males specifically. Unwarranted aggression and sexual activity are likely to be a result if you choose not to neuter the male.

It’s important to consider that males can sustain their fertility for several weeks after being neutered. This will be the case for approximately a month or two after your little guy has been neutered. These are ballpark figures which can depend on your breed of rabbit.

If you’ve decided not to spay the female rabbit, you will need to keep your male and female separated for at least 6 weeks after the male has been neutered. This can be a challenge for you as an owner if you have already bought both rabbits.

If not you will need to keep them separated for at least 6 weeks. This can be difficult to manage especially if they’re house rabbits.

If you are still pondering, and haven’t actually purchased two rabbits yet the best plan is to wait. When you’re introducing your male rabbit to a new female, wait until 6 weeks have passed since your rabbit was neutered.

If you’re introducing a female to a new male make sure the male has been neutered, and that you know exactly when. This will allow you to wait for the ‘cool off’ period to finish before introducing them.

For more information on neutering check out our rabbit neutering infographic!

We share the RSPCA view that you should alter both your male and female rabbit if putting them together. The risks of reproductive cancers, faced by female rabbits such as ovarian and uterine cancer are almost removed entirely when spayed.

Another factor to consider is aggression between your rabbits. Neutered rabbits tend to be less aggressive, and have often lost that territorial instinct. So, when the time comes to introduce your rabbit to its new friend, it’s a lot more likely they’re going to get on. Introducing two neutered rabbits means they can spend less time arguing over which toy belongs to who and can get off on the right foot.

Neutering and Spaying Will Make Them Better Companions

If you choose to have both genders treated, you are likely to find they get on better. They will be more calm, affectionate, and trustworthy. Without the mating urge, your male and female rabbits will be able to develop a really strong bond.

As well as positive traits, you will avoid negative behaviors. Altered rabbits will be much less destructive, and less likely to chew things and dig. They will also have less aggression brought on from mating urges, and therefore less likely to fight.

Neutering your male rabbit will stop it from spaying. Both genders will be much easier to train after they have been altered. So, not only does it benefit your rabbits but it also benefits you as an owner in your training efforts.

Millions of unwanted animals are born every year, not breeding your rabbits means you are helping prevent overbreeding.

Many pet rabbits are often left abandoned to fend for themselves, which can often lead to starvation, sickness, and death. Even if you gave your bred rabbits to a pet store or a shelter, you can’t be sure they will go to a loving home.

Male and female rabbits can make great companions. You need to make sure that you take precautionary steps to prevent them from reproducing. Neutering your male and spaying the female is our recommended option. This will allow them to love one another with affection, without any reproduction risks or bad behavior brought on from mating urges.

For more guidance on introducing rabbits check out this great RSPCA guide.