15 Most Athletic Dog Breeds In The World (With Pictures) 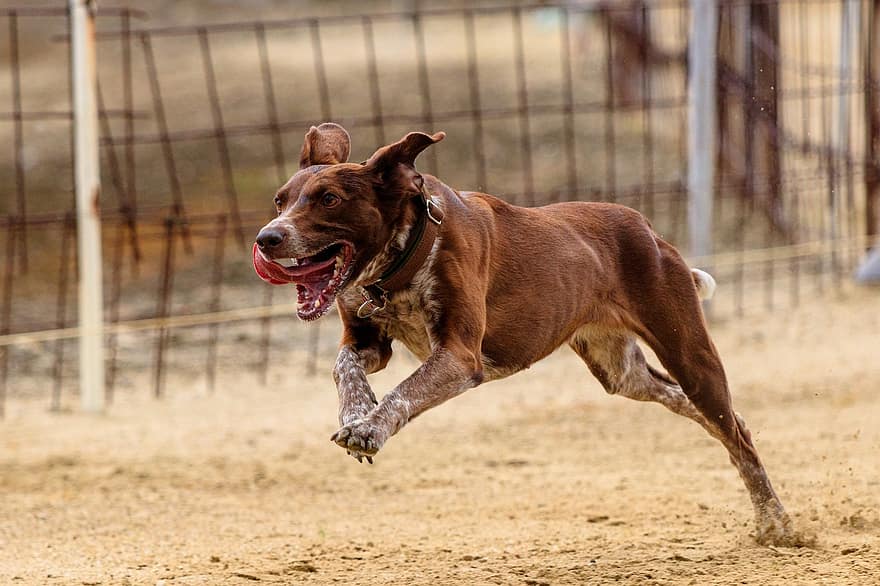 Even the smallest dogs require some form of daily exercise, but certain dogs have athleticism built and bred into their genetics. These dog breeds have a seemingly never-ending abundance of energy and will require hours of daily exercise to burn it all off. If you are a lover of the outdoors and lead an athletic lifestyle, a high-energy dog is an ideal choice.

What makes these dogs so full of boundless energy? It usually comes down to their genetics and what they were originally bred to do. While this energy can differ from dog to dog, some dogs were just born to run and will be both unhealthy and unhappy if they can’t.

If you are looking for an athletic and high-energy pooch, we put together this list of the top 15 most athletic breeds out there.

The 15 Most Athletic Dog Breeds

One of the most well-known and widely used working dogs, the Border Collie was bred to herd sheep and other livestock on the Scottish borders. These dogs are regarded as one of the most highly intelligent breeds of dogs in the world and are thus a breeze to train. They learn commands incredibly fast and make excellent watchdogs. Being such intelligent and agile dogs, they also love ball games and activities that will stimulate them both mentally and physically. Not only are these dogs still used today for herding, but their athleticism and high intellect are also used for narcotics and bomb detection, search and rescue, and as guides.

These beautiful wolf-like dogs are well-known for their attractive coats and eyes, but they are also incredibly athletic. They are the most popular dog breed used for sledding, as they are energetic and have incredible strength, stamina, endurance, and resistance to cold climates. This sledding heritage means that Huskies love to run, and this can be challenging when exercising them on a leash. When they are let off the leash, they will often bolt, and learned commands are quickly forgotten. Walking Huskies with added weights and packs will assist in burning off excess energy, of which they have an abundance.

German Shepherds were bred as hunting dogs originally and will thrive when given a specific task to complete. Today, they are commonly used as guide dogs, in search-and-rescue operations, and as police dogs. Their high intellect, easy trainability, incredible agility, and famous athleticism make them one of the most versatile and adaptable dog breeds around. That said, these dogs thrive from mental and physical challenges, and a couch-lazing dog is about the only job they cannot do. They are a popular breed for agility competitions, and their intellect, strength, and innate desire to please make them a common winner.

Greyhounds are the fastest breed of dog on the planet, reaching speeds above 40 mph. That said, these dogs do enjoy their downtime and love to lounge as much as they do run. Greyhounds were traditionally used as racing dogs for sport, although the practice has been mostly banned around the world. They are also one of the oldest dog breeds, their likeness appearing in Egyptian tombs dating as far back as 5,000 BCE. They are slender, strong, and streamlined dogs, seemingly designed for running.

The Golden Labrador Retriever is one of the most well-known and popular breeds of family dog in the world. This is due to their calm and gentle temperament and their high level of trustworthiness around children. In addition to this, the combination of agility, intelligence, and ease of training makes them the ideal dog for athletes. They excel at dog sports like tracking and obedience, love to swim with their webbed feet, and are commonly used as guide dogs and in search-and-rescue operations.

The Jack Russell Terriers’ small but strong and agile body was built for speed. They have their origins fox hunting in England and are lively, high-energy dogs with inexhaustible energy reserves. Don’t be fooled by their small size, as they are as athletic as any dogs twice their size. They are highly driven animals with a fearless streak at times, making leash training essential. These dogs make great running and cycling partners, and you’ll be more often left struggling to keep up with them than they will with you.

Boxers may seem like an unlikely choice when you think of the word “athletic,” but they can reach speeds of up to 45 mph, putting them up there with Greyhounds in terms of speed. They have their origins in hunting large game, so they have high levels of stamina and endurance. They are also affectionate and friendly dogs and are popular family pets. Boxers have earned a reputation of being rather stubborn, making them a challenge to train.

The Dalmatian has their origins as a carriage dog in England in the 17th century, so they are well-suited to running long distances. This propensity for stamina and endurance makes them great running and cycling partners, and they will love the regular exercise. Their athleticism made the breed a popular firehouse dog and is still strongly associated with the work today.

Developed in the late 19th century as hunting dogs, the German Shorthaired Pointer has seemingly boundless energy levels. They are a hugely versatile sporting breed, being used not only for hunting but also for their amazing retrieving abilities. They earned their name from the distinctive pointing pose they strike when their eye latches onto prey. They are also friendly and affectionate dogs who make great family pets.

Despite the Poodle’s image of being a pampered show dog, they are a highly athletic breed, traditionally used as hunting dogs. Their high intelligence and webbed feet made them ideal retrievers for water sport and duck hunting, not to mention their thick and water-resistant coat. Their long and agile legs give them a top speed of up to 20 mph, so their association with wealthy show dogs is only one side of this versatile breed.

Australian Cattle dogs were originally bred for driving cattle across long expanses of rough terrain in the Australian outback, and consequently, they have tremendous stamina and endurance. They are strong, sturdy, and rugged animals who can hold their own in even the toughest terrain, with high intellect and trainability. These loyal dogs are ideal for active owners and make great family pets, provided they have space and get the required exercise.

The wolf-like Alaskan Malamute were bred for their strength, endurance, and ability to cross long distances with heavy sleds. Consequently, these highly intelligent dogs require huge amounts of regular exercise to stay happy, and are perfect for athletic owners. They form strong bonds with their owners and thus need plenty of companionship in addition to regular exercise. These dogs don’t do well in hot climates due to their thick coat.

Commonly known simply as the “Aussie,” the Australian Shepherd — despite its name — was originally developed for herding cattle on ranches in the United States. They are extremely agile, intelligent, loyal, and hard-working and love nothing more than pleasing their owners. While they are well-known for herding, they are also excellent sporting dogs, commonly used in rodeos and agility competitions. They also make fantastic family pets, provided they get the massive amount of exercise that they require.

Originating in Southern Africa, the Rhodesian Ridgeback is named for the distinctive ridge of hair growing in the opposite direction down their back. Often referred to as the African Lion Hound, they have a gentle temperament despite their somewhat threatening presence and are highly intelligent and thus easy to train. They are known for their agility and knack of jumping fences, but they don’t make the best guard dogs because they have a low propensity for barking.

The Vizsla originated in Hungary and was bred as a hunting dog. They are highly affectionate, and commonly get attached to their owners, earning them the nickname, “Velcro Vizsla.” Their hunting origins led them to develop this attached nature, as they were used as Retrievers who rarely strayed from their owners. These origins also make them a high-energy breed with tremendous stamina, ideal as companions for runners, hikers, and cyclers.