What counts as beautiful differs from person to person, especially when it comes to dogs. Some people prefer small, long-haired dogs, while others prefer shepherds and dogs like the Siberian Husky. In this article, we’ll take a look at some of the breeds generally considered to be the most beautiful.

The Golden Retriever is one of the most popular dog breeds in the United States. They were bred to retrieve birds undamaged. This led to the development of a soft mouth, which basically means that the dog doesn’t bite down hard. They also have an instinctive love of water – a requirement for the work they were bred for.

This breed is most suited for suburban or country living, as they require quite a bit of exercise. They are quite intelligent and train easily, making them suitable dogs for first-time owners. The typically Golden Retriever is calm and very eager to please. They will do practically anything you say and respond readily to commands.

Many consider Siberian Huskies to be some of the most beautiful dogs out there. Their bright blue eyes and fluffy coat easily put them on the top of most lists. They have a double-coat with erect ears and very distinctive markings.

However, this often leads many people to adopt them for their looks alone. We do not recommend this dog for first-time owners, though. They are extremely active and require quite a bit of exercise. They also have a tendency to be quite stubborn. They are not very trainable, though they are intelligent. Instead, they tend to ignore commands when they are given and do their own thing. Their intelligence can also get them in trouble. They will figure out how to open cabinets and even doors. They are often intelligent exactly when you don’t want them to be.

However, they are great personality dogs. Many people absolutely love their personalities, but they can be a bit to take care of.

As the most popular dog in the United States, the Labrador Retriever is loved by very many people. They aren’t exactly very exotic-looking dogs, but they are very balanced. These dogs are known to be outgoing and kind. They are friendly with just about everyone and intelligent enough to be used in many different working environments.

They are an even-tempered breed that makes a good family dog. They are often considered to get along well with children and even other animals. They don’t have an incredibly high prey drive, which makes them suitable for homes with other pets, like cats. Because they are working dogs, they do need quite a bit of exercise. They do best in active families.

This breed usually lives over 12 years, though many dos do live longer. They usually start greying around the muzzle around the age of 8. They are prone to some health problems but are typically pretty healthy dogs.

The German Shepherds are a breed of working dog from Germany. While this dog does look very similar to a wolf, it is actually a very modern breed of dog that just dates back to 1899. As their name suggests, they were originally used for sheep herding. However, they are currently used for a variety of jobs due to their high intelligence and trainability.

They are a moderately active breed that does require some daily exercise. However, they are not as energetic as some of the other large, working dogs. They are very trainable and tend to bond closely with their people. If they aren’t properly socialized, they can be overprotective of their family and aggressive. They are not inclined to be friendly towards everyone, so socialization is necessary.

This dog is generally healthy, though some in the show strain are starting to develop back problems. This is a bit of controversy and has led to a re-writing of the breed standard to avoid strange back forms.

The white, fluffy dog is absolutely adorable. They are herding dogs used by the Samoyedic people to herd reindeer. They are friendly and love just about everyone, which makes them suitable family dogs. They are constantly alert and look quite happy. Some people even describe them as smiling. They do have a tendency to bark, so some people utilize them as alert dogs. However, they do not make good guard dogs due to their friendly nature.

These dogs remain playful throughout much of their life and are quite active. They enjoy just about any activity that involves running around with their family.

They are somewhat prone to specific diseases. For instance, a rare kidney disorder runs in their bloodline. This disease is most severe in male dogs. Females may develop symptoms but usually do not go into kidney failure like males.

The Australian Shepherd was actually developed in California – not Australia. This herding dog was originally used throughout the western United States but has become one of the most popular companion dogs.

This canine is typically known for being intelligent and active. They require a lot of exercise. They are not suitable for families that are not active. We wouldn’t recommend them for first-time owners, as they require quite a bit of training and activity. They can become destructive if they do not have enough exercise or mental stimulation—plan on spending plenty of time with this dog.

Poodles are the stereotypical pretty dog. Their curly fur and unique appearance make them very popular. However, they are a working dog and require quite a bit of exercise. They can be extremely active and require hours of exercise each day. They love water, as they were bred to be water retrieval dogs.

They are an extremely intelligent breed. This makes them easy to train. However, they also need a fair amount of mental stimulation to stay happy and healthy. Otherwise, they will get bored and can often become a bit destructive. They are a bit reserved with strangers and aren’t quite as friendly as other dogs. They are not typically aggressive, though.

The Standard Poodle is very good with children. Their large size prevents them from getting hurt at the mishandling of young children. However, they are very gentle and love to romp around. They make great family dogs as long as the environment is stable and relaxed. Miniature and toy varieties tend to become scared of children more easily, which can cause fear aggression.

The Saluki is an exotic-looking sighthound that was once used around the fertile crescent to hunt game animals. This is a very old breed, though it has likely changed over the centuries. This dog is a landrace, which means they developed naturally, not through selective breeding.

This breed has preserved many of its original hound traits. It is reserved with strangers and very independent. While it does like the company of people, it doesn’t need people like some other breeds. They are fine being left alone as long as their needs are met. They can bore easily due to their intelligence and need stimulation. This can be in the form of training, games, or puzzle toys. They are calm and quiet, making them good apartment dogs as necessary.

The Irish Setter comes in very rich, beautiful colors, which is why we decided to include it on this list. Their moderately long coat comes in chestnut or red. It does require regular brushing to keep it mat-free. Their coat feathers along the tail, chest, and ears.

These dogs get along with just about everyone. They can get along with smaller animals as long as they are introduced from a young age. Otherwise, they may see them as prey animals. This dog is extremely affectionate with their family and strangers alike. They are an active breed, so they require regular walks. They are trainable but can have selective hearing when they are paying attention to something else – like a wild animal or another dog.

This large breed was originally developed for hunting. They were used for large game at first but have also been utilized for smaller animals like rabbits and foxes.

These dogs look extremely athletic and come in both long- and short-haired varieties. Their soft, grey coat gives them a unique, stunning appearance. Occasionally, their tail is docked to about 6 inches. While this was necessary for hunting dogs to prevent injuries, it is not necessary for companion animals and is illegal in many countries.

This dog is extremely energetic. They have a high prey-drive, which makes them unsuitable for homes with smaller animals. Some can be socialized to accept cats, but there are many reports of Weimaraners killing cats they have known for years. They will likely chase just about anything. They do require regular exercise and love to play games. For this reason, they do best with an active family. 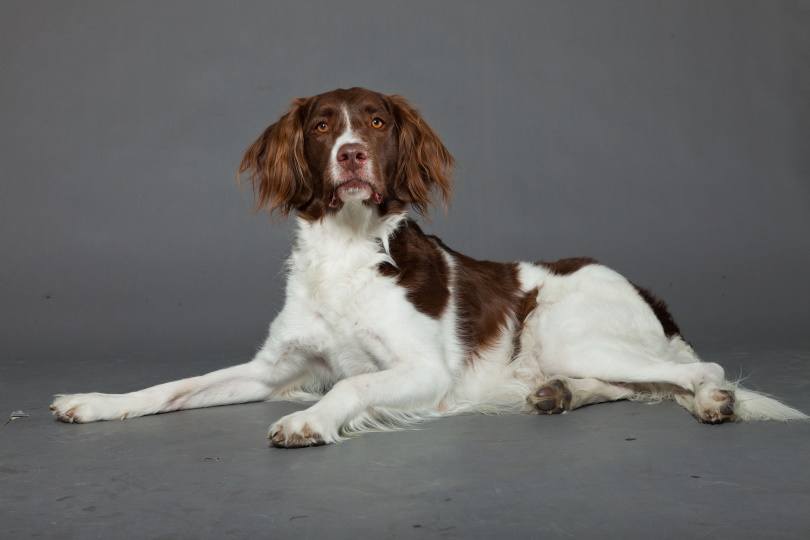 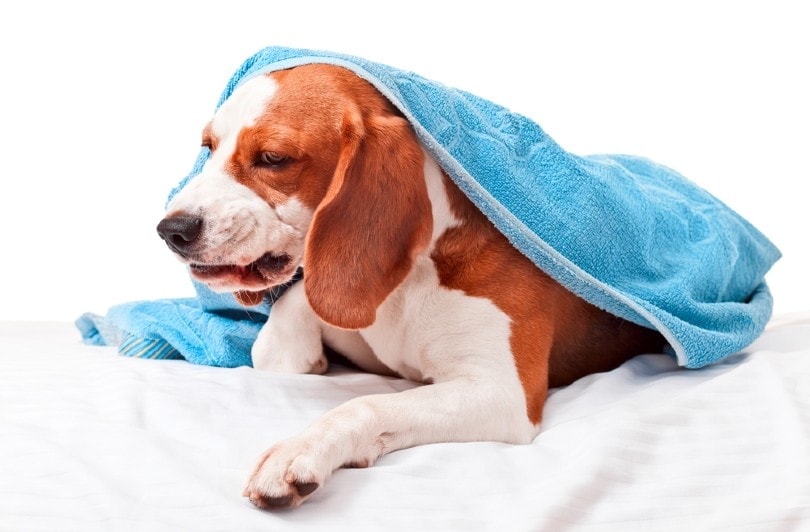 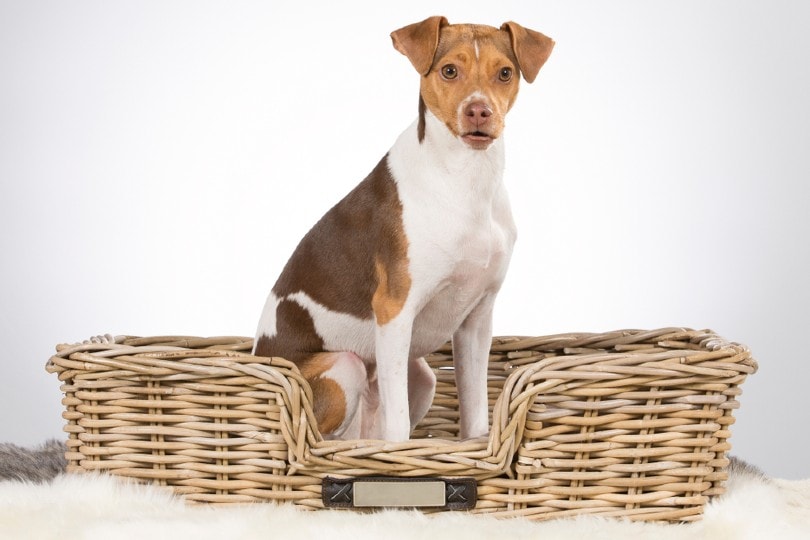