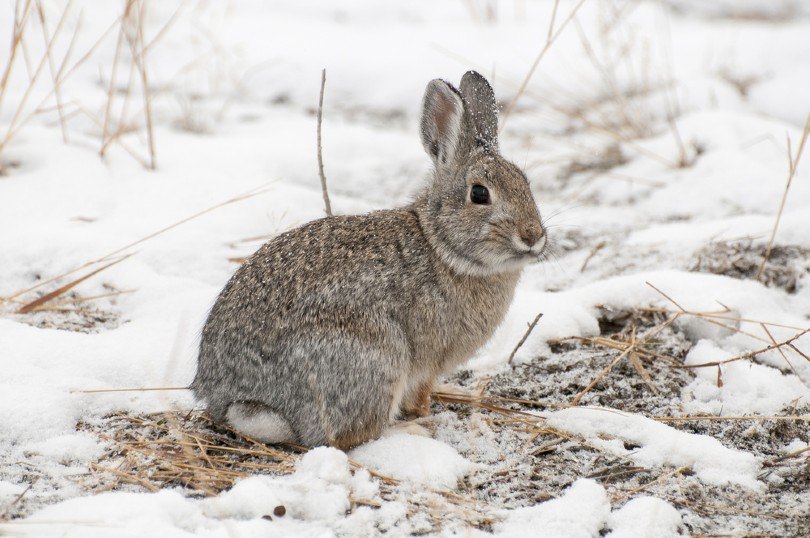 Cottontail rabbits are widespread and extremely common creatures. The mountain cottontail specifically is mainly contained in the western region of the United States. They’re fairly small, rarely reaching 3 pounds in weight. As herbivores, they survive on a variety of plants, seeds, and grasses.

Mountain cottontails prefer to live in deep brush cover to hide from the many predators that hunt them. Because they’re a favorite food of so many creatures, these rabbits tend to live much longer in captivity; up to 7 years, compared to the average lifespan of just 15 months in the wild.

Quick Facts About the Mountain Cottontail

Mountain cottontails tend to be rather docile creatures. In the wild, they’re prey for just about every predator around, including foxes, coyotes, bobcats, snakes, owls, and even humans. They have very short life cycles, particularly in the wild.

To deal with that, mountain cottontails are prolific breeders, producing four to five litters each year. Each litter consists of four to eight young, making for 16-40 babies per year from a single female. The cycle continues quickly, with newborn rabbits being weaned at just 1-month-old. By the age of 3 months, a rabbit is sexually mature and ready to reproduce.

Unlike many creatures that bed down, mountain cottontails are almost always on the go, searching for a new place with a steady supply of food. They tend to find shelter in heavy brush, staying in an area for only a short time while feeding on whatever is available nearby.

In captivity, these rabbits have a considerably longer lifespan. They do need plenty of space though since they need to hop around for exercise. At a minimum, you’ll need an enclosure with 12 square feet of space for a single mountain cottontail. Of course, more space is always better.

How Much Do Mountain Cottontails Cost?

If you’re looking to add a mountain cottontail to your family, then you’ll be happy to find out that these are extremely affordable pets. In fact, you’ll probably spend more on the enclosure than you do purchasing your rabbit.

You can generally find mountain cottontails for as little as $10-$15. In stores, you might pay closer to $30. The enclosure will likely cost more than this unless you can find one that someone is giving away.

Even caring for a mountain cottontail is affordable. Compared to dog or cat food, rabbit feed is rather cheap, and they don’t each very much since they’re such small critters.

In the wild, mountain cottontails are incredibly skittish creatures. After all, pretty much everything wants to eat them. In captivity, that never quite leaves. While some rabbit species make excellent pets, Mountain cottontails are not generally included on that list. They tend to remain untrusting and you’ll have a hard time building any type of bond with your pet.

Mountain cottontail rabbits are about 13-18 inches in length when they’re fully grown, displaying fur of a grey-brown color. The underside is generally pale, and you’ll see more of the brown coloration on the hind legs and towards the lower portion of the rabbit’s body.

Similar to most rabbits, mountain cottontails have long, powerful hind legs that help them cover distance quickly. Compared to other rabbit species, these cottontails have small ears. Their ears have rounded tips with noticeable hair on the inside.

Between specimens, there aren’t many differences. They all share a common appearance and will grow to similar sizes. Males are naturally larger than females.

How to Take Care of a Mountain Cottontail

At a minimum, your mountain cottontail is going to require 12 square feet of space for a single specimen. It’s better if you can provide more space though, and it will result in a healthier pet.

Within that space, you’ll need to provide a separate area for sleeping that’s covered in soft bedding of some type. Hay is a good choice. This area also needs to be protected from the elements, offering a safe haven your rabbit can escape to if the weather starts to turn sour. It will need to be entirely waterproof, guaranteeing that no rain can penetrate and leave your rabbit stuck in wet and miserable conditions for an extended time.

Mountain Cottontails prefer a temperature of about 60°-70° Fahrenheit, though they can thrive in a wide range of temperatures. As long as you provide an area where your rabbit can find respite from the wind, rain, and other elements, it should be able to handle any outside temperatures. Ultimately, they do survive in nature just fine.

Do Mountain Cottontails Get Along with Other Pets?

Remember, mountain cottontails are a prey creature. In nature, everything is trying to kill them, so they’re naturally pretty skittish. Your rabbit will become accustomed to you with some time, but getting them comfortable with other pets can prove more difficult.

Generally speaking, rabbits will get along just fine with other rabbits. Things are a bit different if you start introducing dogs and cats to the equation. Dogs and cats are both natural predators that would feed on rabbits in the wild. Your rabbit will be very wary of these creatures. But if they’re very calm, docile, and don’t make sudden or threatening movements, your rabbit might learn to get along with them. Don’t expect it to happen quickly, though. It will take patience and repeated exposure.

What to Feed Your Mountain Cottontail

Mountain cottontails are herbivores, so they feed exclusively on plant matter, such as seeds, leaves, grasses, and more. You can feed your rabbit a variety of different foods in captivity.

Stick to natural vegetables and fruits, like broccoli, carrots, spinach, apples, and strawberries. They’ll also eat grass, which you can purchase or simply allow them to graze from the yard. Another option that’s easy and convenient is rabbit pellets, which are designed to offer complete nutrition for your Cottontail.

Keeping your mountain cottontail healthy isn’t very difficult. You’ll need to attend to the basics regularly. Ensure you’re feeding your rabbit a sufficient amount without overfeeding. The diet should be varied and consist of many different foods, including fresh fruits, vegetables, and commercially-produced pellets and grains.

You’ll also need to keep your rabbit’s enclosure clean. As waste builds up, so does the susceptibility to disease. Regular cleanings each week can ensure that your rabbit remains in good health.

Be certain to provide plenty of opportunity for exercise. In the wild, these rabbits are constantly on the go. You’ll need to have a large area available where your rabbit can safely spread out and get that much-needed physical activity if you want it to stay in good health.

Mountain cottontails can produce as many as five litters each year. They generally mate from March to July. After mating, it takes about 1 month for the young to be born. Only 3 months later, the offspring is ready to continue the cycle.

If you want to breed your mountain cottontail, you’ll need both a female and a male. If you keep them together during the months from March to July and they’re both in good health, you might end up with a litter before you know it. But things can quickly get out of hand since each litter will produce 4-8 young and rabbits can produce many litters each year. Be sure you are prepared for what breeding demands of you as an owner. Speak to your vet before you make any hard decisions.

Are Mountain Cottontail Suitable For You?

Mountain cottontail rabbits are prevalent in the western US, but you won’t often find them in captivity. While they’re easy to care for and can survive longer in captivity than in the wild, they’re naturally fearful and skittish animals that don’t often get comfortable with humans. As such, you won’t be able to bond with your rabbit. Other types of rabbits become cuddly and loving companions and they make much better pets than mountain cottontails.