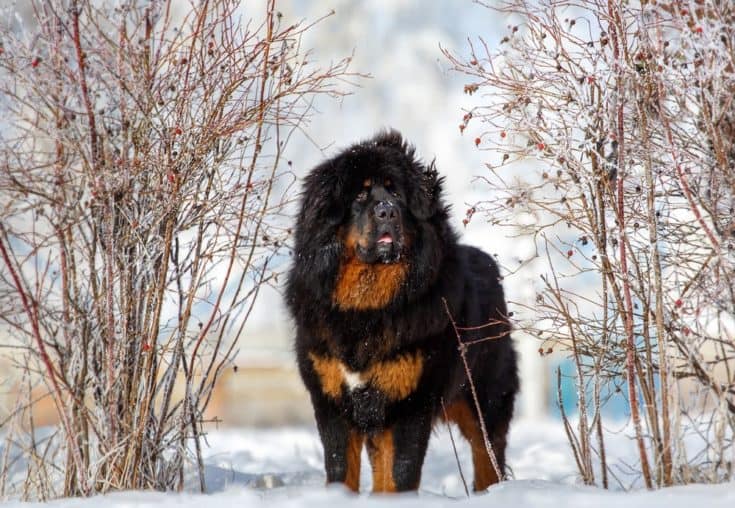 The Mountain Mastiff is a mixed breed being the offspring of a Bernese Mountain Dog and a Mastiff. She is a giant cross breed with a life span of 7 to 12 years. She has several talents including carting, weight pulling, tracking and guarding. She is a kind and sensitive dog who is known for being especially loyal to her family.

Where does the Mountain Mastiff come from?

The Mountain Mastiff is a mixed or cross breed created probably in the last two to three decades along with many other what are called designer dogs. Most of these dogs do not have much known about why they were bred and by whom. A few were bred with real reason or thought behind it but a lot of them have been created just to make money from people who want to follow with the trend. That does not mean to say you should avoid designer dogs just be sure to buy from reputable breeders only.

Since there are no origins or a history to tell we can look at the parent breeds for an understanding of what traits might go into their offspring.

The Bernese Mountain Dog is also called the Berner and is believed to be a descendent of the Molosser, a Mastiff type dog. The Berner was used as a working dog on Swiss farms for over 2000 years in the Alps. He was bred to pull carts, be a guard dog to the property and protect the livestock. He was also a companion. By 1888 with industrialization and many agricultural workers moving to towns the needs for a dog to work on farm dropped as the number of farms dropped. Thankfully though in 1899 the Swiss started to take action to preserve their breeds so the Berner survived.

Today he is an alert, smart and affectionate dog. He is big but very calm and gentle. He is at his happiest when with his family, wants to be where all the activity is happening and is very loyal. His size can be an issue and he can be shy so early socialization and training are important. He is slower to mature than many dogs and he is wary of strangers.

The Mastiff is also a descendent of the Molosser! You can find references and pictures to various Mastiff type dogs across thousands of years of history all around the world. They were used as war dogs, for hunting, as guard dogs and were valued for their strength and bravery. Famous people from the past owned them, Kublai Khan and Hannibal to name just two. The modern Mastiff was developed in England. They were used to guard estates especially at night. The breed nearly became extinct when bull and bear baiting were outlawed and then again during the World Wars but they were saved.

Today he is a very popular dog admired for his size and his gentle nature. He is courageous but docile and never vicious. When well socialized he will regard strangers as possible threats but will just be wary. He may use his body to protect you from possible threat. He does not like it when family members are arguing and is known to step in if a parent is punishing a child. He is sensitive and needs to be handled knowledgeably or he can be fearful, shy and then aggressive.

The Mountain Mastiff is an affectionate, kind and sensitive dog. She has the docile nature of the mastiff and is even tempered making her great with children and other animals. She is a very loyal and devoted animal and she will act as protector if she thinks it is needed. She tends to be wary of strangers and is sensitive so needs positive handling. She is eager to please and intelligent so training should go well if done in a gentle and positive manner. While often used as a guard dog due to her size she also makes a great family companion and is very loveable.

The Mountain Mastiff is a giant dog weighing 150 to 200 pounds and standing 28 to 38 inches tall. She can have a coat that is look either parent, short and tight or a double coat that is rough on top and soft and dense beneath. Common colors include black, tan, apricot, silver, brown, white and fawn. She can take after either parents in appearance but often you can see a powerful body, a flat head with ears that hand down the cheeks and almond shaped eyes.

How active does the Mountain Mastiff need to be?

She is a fairly active dog just because of her size she needs a couple of daily walks and some play time. But she is not the most energetic dog out there that is for sure. Also she actually has low endurance so nothing to vigorous or too long. Dog park visits are a good idea as part of her routine, access to a large yard is also something she needs.

She is intelligent, eager to please, has a tendency to listen to and obey commands so training will be easy and quick. Early socialization and training are important still to develop an even temperament. Remember her sensitivity and avoid harsh training methods as it is not something she will respond well to. Be firm and consistent but keep it positive.

Living with a Mountain Mastiff

She has moderate grooming needs, which ever coat she has they are easy to brush but she does shed constantly so will need daily brushing. You will need to vacuum regularly too. Bathing her at home with her size is certainly going to be a chore. If you do not have something like a walk in shower or a larger bath tub, you could try the hose. Otherwise groomers usually have bathing stations customers can use to wash their dogs. Bathing should only be done when she is really dirty though. Other needs she has are clipping her nails should they get too long, wiping and checking her ears once a week and brushing her teeth at least two to three times a week.

She is such a kind and warm hearted thing she gets on with everyone especially with early socialization and training thrown in too. She is good with children, other pets and other dogs. Watch her with small children just because of her size she may bump them over by mistake. She is affectionate and playful and protective.

The Mountain Mastiff is a good watchdog and will bark to alert you of intruders. She otherwise is not a huge barker. She will need feeding at least 4 1/2 to 6 cups of high quality dry dog food each day divided into 2 to 4 meals. She does not do well in the heat at all and must be closely monitored but is a lot more adaptable to colder climates.

Every dog owner wants their dog to be as healthy as possible. No-one wants to go through the heartache and expense of a sickly dog. Buying from trustworthy breeders and asking to see health clearances are a couple of things you can do right from the start to help give your dog better odds at a healthy long life. There is the possibility though that she might inherit something from her parents and issues she can be prone to are; eye problems, seizures, kidney problems, bloat, cancer, PSS, Von Willebrand’s Disease, joint dysplasia and pano.

The range of prices for a Mountain Mastiff puppy currently falls between $400 to $950. If not included in the price she will need blood tests, shots, deworming, chipping and spaying. She will also need some basic items like a crate, collar and leash, bowls and so on. These costs amount to $450 to $500. Average annual medical expenses for pet insurance, check ups, flea prevention and shots come between
$485 to $600. Average annual non-medical expenses for training, treats, toys, food and license come between $600 to $700.

Looking for a Mountain Mastiff Puppy Name? Let select one from our list!

This is certainly not a dog for the frail! She is big, will need early socialization and training so that she is easier to control, will need a yard, regular exercise, a lot of food and a lot of love! But she is so affectionate and will be completely devoted to you. She will quickly become your big baby!