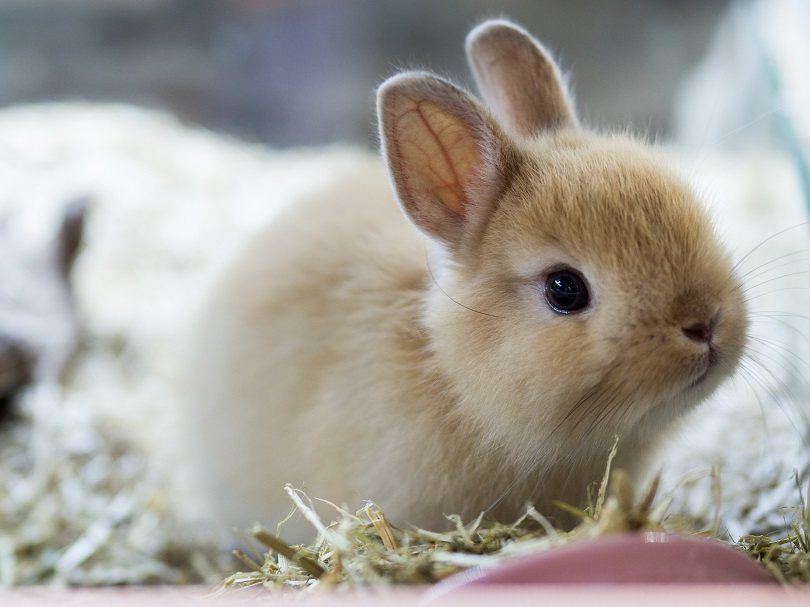 Everybody’s favorite pint-sized powerhouse of a rabbit, the Netherland Dwarf has earned a reputation as both one of the most popular breeds to keep as a pet as well as perhaps the liveliest and most dynamic breeds available. A relative newcomer as a recognized breed, they have taken the rabbit breeding world by storm in the past 50 years through a combination of their roguishly good looks and endearing personalities.

If you’ve ever been curious about this most feisty of miniaturized rabbits, this article intends to inform you of everything you might want to know before deciding to keep one as a pet. Read on to find out more about the breed’s history and common characteristics, as well as what you’ll need to do to welcome one into your home!

The result of painstaking decades of selective breeding, the Netherland Dwarf originally descended from a small, white, German breed known as the Hermelin. By breeding this diminutive ancestor with only the smallest of wild rabbits, Jan Meyering of Holland ended up producing the first stable breeds of the many-colored miniature that we know and love today.

If it weren’t for the combination of their adorable appearance and hardy, adaptable natures though, the Netherland Dwarf may never have survived through World War 2. Because the breed had just been established only weeks before war broke out, by the time fighting ended some 7 years later there were only 17 Netherland Dwarfs left.

Thankfully, through a combined effort by Dutch and English breeders, the Netherland Dwarf was brought back from the brink of extinction — and into a flourishing spotlight all its own. Within just a few years of the breed reaching U.S. shores in the late 1960s, a huge boom in imports and exports was necessary to meet the demand for these heart-winning bunnies.

Today, they are known as one of the leading show rabbits by breeders and judges across the world. For more information on the precise origins of this breed and its plight during World War 2, see Bob D. Whitman’s Domestic Rabbits and Their Histories, from which we have sourced much of the information in this section.

As the smallest of all miniaturized rabbits, the Netherland Dwarf is almost impossible to mistake for any other breed. Their sturdy, compact bodies and tiny, protruding ears make a fantastic complement to their perky and energetic personalities. Were it not for their particularly tiny stature, their slightly aggressive natures might make them less popular; as it stands, they are hardly big enough to do any damage.

No other rabbit breed can quite match the variation in coat colors seen in the Netherland Dwarf. With over 20 recognized colors, ranging from chestnut to blue-eyed white, to Silver Marten or Himalayan patterning, they come in a veritable painter’s palette of fur styles. No doubt this incredible variety of colors and patterns has contributed to their popularity as a pet and show rabbit.

Partly as a result of their complex genetic heritage, all miniaturized rabbits enjoy a significantly longer lifespan than larger rabbits — and generally experience fewer health problems, as well. By providing them with plenty of timothy hay and fresh water as well as moderate amounts of leafy greens and other vegetables, Netherland Dwarfs will enjoy good health well into old age.

If you are limited in the space you have to care for a rabbit, the Netherland Dwarf makes a fantastic option to keep as a pet. Their small, compact stature means that they need less room to run and exercise — though you should always be mindful of giving them freedom to roam while you’re home.

The amazing variety of Netherland Dwarf coats all have similar grooming requirements: Once per week for most of the year, and twice per week while your rabbit is shedding. It’s worth noting that some Netherland Dwarfs don’t take very kindly to being groomed, and may be more interested in attacking your rabbit brush. If you find this to be the case, consider bribing them with a small treat while you perform their necessary grooming.

The Netherland Dwarf may be the most high-spirited of all rabbit breeds, renowned both for their lively and energetic natures as well as their tendency to settle disagreements with their tiny teeth! Far from the docile and relaxed nature of larger breeds, these dwarves can often be seen racing around their home during their most active hours at dawn and dusk.

Combining a particularly spunky attitude with their dashing good looks and tiny bodies, many owners find Netherland Dwarfs to be generally harmless — if constantly mischievous. This makes them especially well-suited to younger owners and people with plenty of time to make sure they aren’t getting into too much trouble.

Thanks to the efforts of endearing fans in Holland and England, the Netherland Dwarf that we know today survived near-extinction after World War 2. Riding on the wave of this grassroots enthusiasm, it has become one of the most popular animals to keep as a pet or exhibit in rabbit shows. If you’re looking for a highly energetic rabbit with lots of personality, the Netherland Dwarf may be perfect for you!