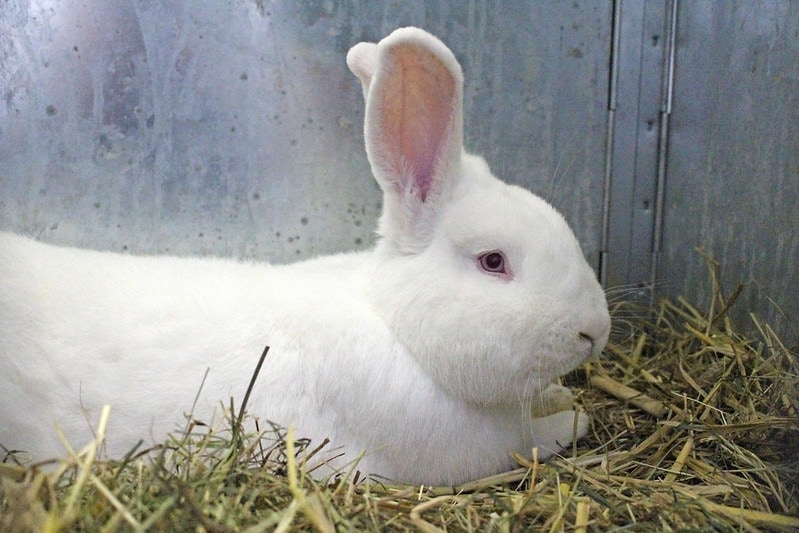 One of a handful of rabbit breeds named after exotic places, the New Zealand is in fact distinctly American. How, then, did it end up named after a remote island nation near Australia? The answer might surprise you…

In today’s article, we’ll be looking at the curious history of this versatile breed. From its earliest days of breeding to modern day commercial use and home pet care, the New Zealand has a storied past and well-respected reputation as a most worthwhile rabbit breed.

Read on to find out more about this descendant of a now-extinct rabbit breed!

History and Origin of the New Zealand Rabbit Breed

In his book Domestic Rabbits & Their Histories, author Bob D. Whitman gives an exceptionally thorough account of the history and development of the New Zealand rabbit. What follows is an abbreviated version of the nearly 10-page story:

Contrary to popular belief and legend, the New Zealand was not brought to America by a sailor returning from New Zealand in the early 20th century. Instead, it is a product of long breeding experiments in California, between a now-extinct breed known as the Golden Fawn and possibly Belgian Hares for deeper coloration.

Though there are a variety of accounts from 1906 through 1915 claiming that the New Zealand was bred from rabbits brought back from its namesake country, they are simply mistaken. In fact, the only rabbit breeds known to exist on the island country at the time were European wild rabbits, and a small portion of English Silver Greys — neither of which would produce the New Zealand’s striking red or white color.

On the issue of the New Zealand’s origin, American rabbit breeding pioneer John C. Fehr is quoted as saying “… the New Zealand was not originated in any particular locality…  different strains were being started in numerous sections of the country at one and the same time”, later emphasizing that “my personal opinion is that it should be called the American Red, for it is truly an American rabbit.”

Indeed, as far back as the 1910s, some breeders were lobbying for a change of name for the New Zealand to the American Red. When this name change was put to a vote in the National Association of Rabbit Breeders, though, it was voted heavily against. Ever since, the breed has continued to be known as the New Zealand.

No matter which origin or name people may wish to argue for, it’s without a doubt that the New Zealand’s spread through the United States came as a result of its incredible versatility. Suitable for meat and fur production just as easily as being shown or kept as a pet, it remains a popular breed to this day.

Available in three primary colors — black, red, or white with pink eyes — the New Zealand is the spitting image of a “classic American rabbit”. Their bulky commercial shape bodies are hardy and resilient, yet they don’t grow to the overly large sizes that can make owning some giant breeds a tough prospect.

Overall, New Zealands are a perfectly suited all-round rabbit breed. Not too big, nor too small, they are easy to care for and make wonderful companions. They are equally well suited for first-time owners or experienced rabbit lovers.

As a breed originally intended for commercial purposes, New Zealands are hearty and enjoy robust health. Provided with plenty of clean water, timothy hay, and fresh greens, they will easily stay in great shape with little intervention.

Be sure, as with all rabbits, to give your New Zealand plenty of room for running, playing, and exercise. If you have the option to provide them with an outdoor enclosure, they are quite adaptable to a wide range of temperatures.

The coats of New Zealands are very easily manageable, rarely requiring grooming more than once per week. During shedding season in the springtime, you may wish to increase the frequency of grooming to twice per week to prevent any health problems from your rabbit eating their own hair. Always use a specially-made slicker brush for all your rabbit grooming needs!

New Zealands are docile and easygoing, making them perfect companions for prospective owners of all experience levels. Where smaller rabbits might be more prone to stress responses, New Zealands keep their cool even in somewhat louder or more hectic environments.

Two things make them well suited for families with children, as well: First, their slightly larger size makes them less likely to be handled improperly; and second, their enjoyment of grooming and pets makes it easy for children to interact with them. Overall, they are an excellent breed for households with children of any age.

These American-born rabbits are truly one of the most versatile breeds available today. Anyone with an interest in raising rabbits for show, as pets, or for farm purposes would do well to consider owning one. An ideal combination of hardy genetics, a pleasant demeanor, and handsome looks has made them a favorite of rabbit owners around the country.