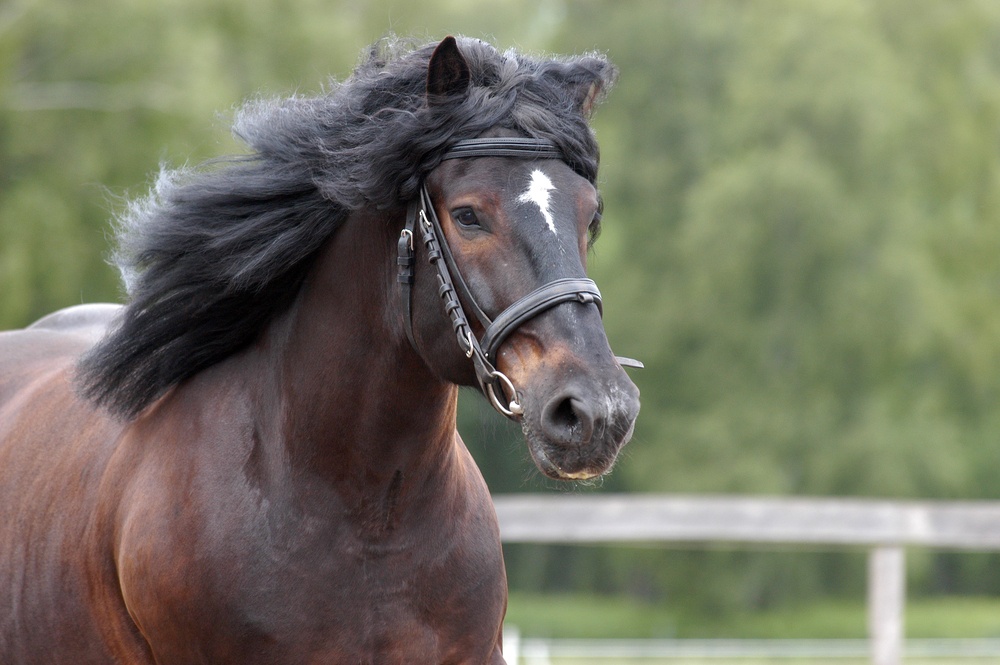 Certain species of horses catch your eye, and one of these is assuredly the Noriker horse, also called the Pinzgauer and the Norico-Pinzgauer. They can come in various colors, but the most popular is a Dalmatian-like pattern of white with black spots.

Noriker horses are heavy draft horses from Austria. In this article, we cover their history, personality, and care if you are interested in owning a beautiful Noriker horse.

Noriker horses are an old horse breed, coming with the Romans as they conquered the area that is now modern-day Austria. After their takeover, it became Noricum, and the name for the horse was established. This ancient lineage has helped them become one of the oldest draft mountain breeds in Europe.

The Noriker horse is indigenous to the highest Austrian mountains. Due to their native habitat, they are extraordinarily cold-hardy and rugged, accustomed to little food and harsh weather patterns.

Initially, the Noriker was used to transport goods throughout the mountains. However, they have become a top-rated horse as a rider and driver in modern times because they have such a pleasant temperament and are quite agile for a draft horse.

Interestingly, these are one of the few horse breeds still used for similar purposes as those in their heyday. The forestry commission in the Alps still requires horsepower because the conditions and accessibility are not conducive to heavy machinery. Thus, Noriker horses are among the few breeds whose population has not been dramatically reduced by mechanization.

Since these animals often lived in mountain elevations above 6,000 feet, they can be raised outdoor all year round without being given extra feed. Their genetic hardiness is another reason for their current popularity.

Even though the breed has been around for more than 2,000 years, their breeding only came under regulation 400 years ago. It was at this time that a studbook was established for the pure breeding of the Noriker.

How Much Does a Noriker Cost?

The average price of a Noriker horse is between $5,000 and $7,000, although many cost more than this if they have an excellent pedigree. Their age and color also affect their price, especially since they come in so many different color patterns.

The Noriker draft horse is a perfect example of a typical cold-blooded draft horse. They are calm and quite agile. The combination of their agility and willing nature makes them highly adaptable horses. They are overall relatively peaceful and gentle.

These horses are popular because they are sure-footed and well-balanced. Due to living in their native mountain environment, they also can climb, despite being heavy draft horses.

The traditional colors of a Noriker can include white, roan, black, bay, chestnut, and appaloosa. These are base colors, on top of which can be a mix of white markings and a variety of mane and tail colors.

The spotted variety is one of the most popular patterns. It is caused by a leopard complex gene, similar to that seen in the Appaloosa horse. Recently, Austrian researchers dug deeper into the horse’s genetics, and they found that the Noriker bloodlines can be traced back to five horses. These were given the names Schaunitz, Elmar, Diamant, Volcano, and Nero.

For the most part, Norikers are black, bay, and chestnut. Only about 10% of their population are leopards and roans. Males tend to produce more and larger spots if they have leopard genetics.

How to Take Care of Noriker

It is best to give horses as much room as your property affords because they need space to frolic and play. Set up a paddock for your Noriker horse. They can live in this area all year round if you prefer.

If that is the case, it is best practice to shelter them at one end that is at least 30 feet by 30 feet so they can easily sleep. This is enough for one horse. Remember to continue sizing up depending on how many horses you have on the property.

A paddock has to be at least 30 feet by 100 feet to give your horse enough room to run around and play inside. They should always be made from strong fencing. A Noriker isn’t a likely escape candidate, but strong fencing helps discourage wood-chewing and keeps them safe.

If you decide to keep a Noriker in a barn stall during harsh weather, make it at least 24 feet by 24 feet. They are accustomed to being outside in large spaces continuously and can get restless if kept in too small a space. Their large size only exacerbates this restlessness.

Do Noriker Horses Get Along With Other Pets?

Noriker horses are peaceful to their core. They tend to get along well with other horses, particularly other coldblooded horses, since they are also unlikely to pick a fight. Noriker horses will generally not stand getting bullied by other horses, but they also won’t have “stallion battles” like hotblooded breeds do.

Having them around other animals than horses, such as dogs or cats, can be difficult. They might accidentally hurt them due to their weight if the animals get underfoot or spook them.

What to Feed Your Noriker

Noriker horses are more economical horses to keep, even as a moderately large draft horse or “heavy” breed. They primarily feed on grain and hay.

Noriker’s hardiness allowed them to survive on the minimum amount of food, sometimes barely enough to survive, in their native mountains. So, even when kept outdoors year-round, they won’t need many supplements to their diet as most other horse breeds do.

Noriker horses are an incredibly hardy horse breed. There are not many health problems that it is common for them to suffer from, although it is always possible for them to get sick without proper care.

Ensure that your horse veterinarian checks up on them at least once a year. If you live in a challenging climate, give them extra shelter or consider bringing them inside. Just because they are rugged animals adapted to harsh environments doesn’t mean they want to live in them.

Breeding a Noriker horse is similar to the process you should follow for breeding almost any other horse. Luckily, it is less of a challenge than with hotblooded horses because they are so gentle and laidback.

Many Noriker horses get put up for adoption in Europe because it is not entirely legalized to use them as horse meat any longer. Often, those who raise foals for meat will have to put them up for rescue if they do not sell.

Are Norikers Suitable for You?

If you want to own a Noriker horse, it is best to keep their spatial needs in mind. They are beautiful, laidback, and low-maintenance horses to own. They are especially useful as draft horses, capable of driving, riding, and even some sports.