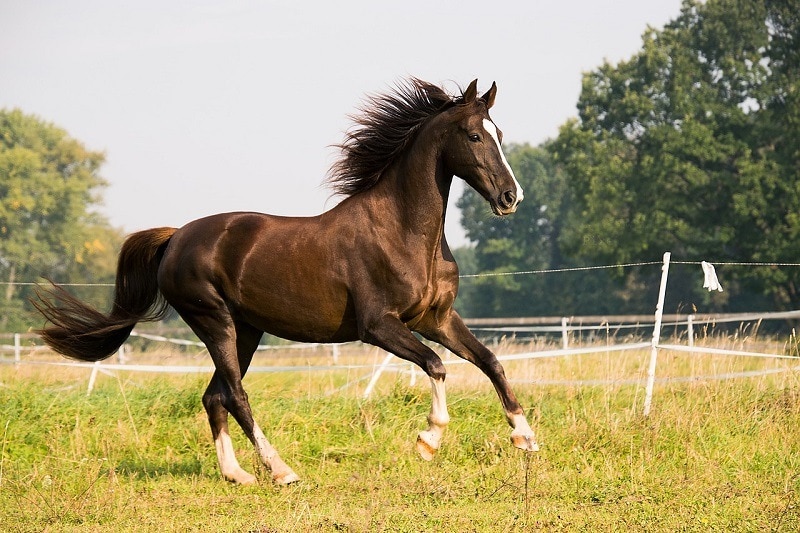 North American horse breeders are responsible for bringing back several horses on the verge of extinction after World War Two. Some of these horse breeds are built for speed, while others can pull cart or herd cattle. Horses can make amazing pets and long-term companions, and they don’t need much maintenance besides regular brushing.  We will take a close look at the North American horse breeds to see if they are suitable for your farm. We will show you a picture and tell you a little about each one to help you learn more about them so you can make an educated purchase.

The American Bashkir Curly is also called a Curly by many breeders. It gets its name from its wavy fur that is especially noticeable in the winter. It has exceptional endurance and intelligent and friendly temperament. The Curly is usually a show ring horse, but it makes a great riding horse as well. It’s very low maintenance because many people choose to leave the mane uncombed to preserve the curls.

You will usually see the American Belgian Draft horse with a chestnut color, and they are slightly shorter than the English version and stand about 16 and 17 hands (64–68 inches). It has a small head and a muscular body.

As you may have guessed, the American Cream Draft horse is light-colored and muscular. It’s a rare breed from Iowa that nearly went extinct during the great depression but survived. It’s a good workhorse, and its numbers are increasing.

The American Drum Horse is a heavy draft horsed modeled after the British Drum. It usually carries steel kettle drums, and you can find them in many parades and events. It’s a mix of the Clydesdale, Shire, and Gypso Cobb breeds, and you will usually see them with piebald or skewbald color patterns

The American Indian Horse is a descendant of the original horses brought to the Americas by the Spanish. It ranged in size from 13–16 hands and can be any color, but the leopard pattern is the most common. Owners commonly use these horses for casual riding. It is a hardy and surefooted breed that makes a great general-purpose horse.

The American Miniature Horse is a tiny breed that breeders created using selective breeding. It usually stands between eight and ten hands high. Owners usually enter these horses into shows where they compete in jumping contests and other activities designed to test their skill and training. In some cases, miniature horses are used as assistance animals because they have a longer lifespan than dogs.

The American Mustang is a free-roaming horse that you can find in the western United States. Many people describe them as wild horses, but they are descendants of domesticated Spanish horses, so they are more accurately describes as feral horses. The government protects these horses and considers them a part of American heritage

The American Paint horse is related to the American Quarter Horse and the Thoroughbred. It’s heavy and muscular but not as tall as many other breeds. This horse breed is primarily concerned with the colors and pattern of the coat. It usually has one solid color like chestnut, black, brown, or bay, along with white sections or spots. These spots can take any pattern except leopard.

The American Quarter Horse is one of the most popular horses in the United States. It has a muscular frame and is quite fast over short distances. It’s a versatile breed that excels at farm work, especially herding cattle and many people like to keep them as a pet.

The American Saddlebred horse is the “horse that America built.” It’s a descendant of the riding horses used during the American Revolution when it was still called the Kentucky Saddler. It has remained popular among breeders since, and today you can find them worldwide, including Great Britain, Australia, and Africa. It stands 15 to 16 hands tall and weighs about 1000 pounds.

The American Shetland is the most popular pony breed in the United States. It has long legs, high withers, and a sloping shoulder for a more elegant-looking pony. Its coat is not as thick as the full-sized Shetland, but it retains its speed, endurance, and hardiness.

The Canadian Horse is a muscular breed that many breeders use for riding. It usually has a dark color like chestnut or black and is derived from several European and American breeds. It was popular in the American Civil War, and large numbers were lost, prompting Canada to ban exporting them.

The Canadian Rustic Pony is another pony breed, and this one is the result of mixing the Heck horse and the Welsh pony Arabian horse. Breeders started the Canadian Rustic Pony Association in 1989 to set standards and guidelines for others to follow. It usually stands between 12 and 13 hands and can have primitive markings, like zebra stripes, but you will usually see them with a grey or buckskin color.

The National Spotted Saddle Horse is a mix of the Spanish American Pinto with the Tennessee Walking Horse. It has a smooth gate perfect for the show ring and is extremely colorful with pinto markings. It stands 14–16 hands tall and weighs close to 1,100 pounds when it’s fully grown.

Out of the American horses we have listed above, the American Belgian Draft, American Cream Draft, and the American Quarter Horse are the most popular and easy to find. If you need a horse for your farm, it’s best to start there. The American Shetland pony and the American Miniature are great for children, but they will reach adulthood while the Horse still has a full life ahead of it, so you will need to consider what you would do with it after that.

We hope you have enjoyed looking over these horses and found a few that would accent your land. If we have listed a breed you had not heard of before, please share this guide to 14 North American Horse breeds on Facebook and Twitter.