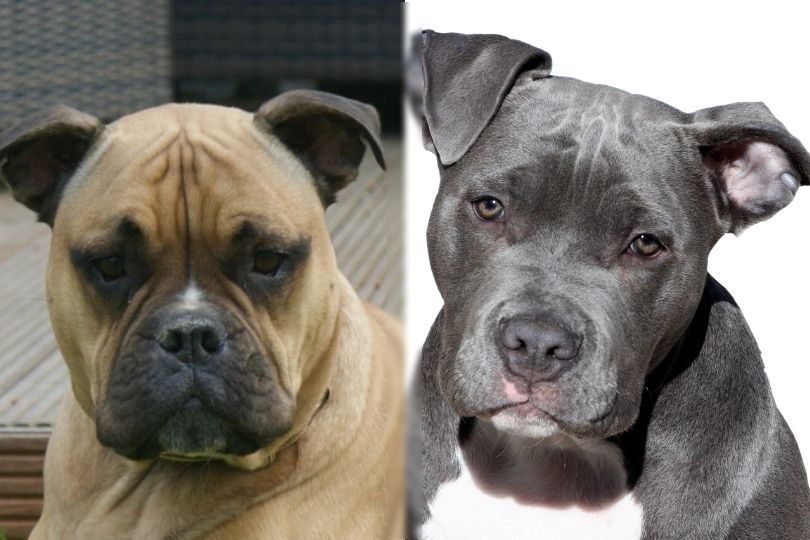 The Olde Pit Bulldogge is a mixed breed that is a cross of the American Pit Bull Terrier and the Olde English Bulldog. He is a medium to large dog with a life span of 9 to 14 years. He has talents in sighting, guarding and watchdog and is a very loyal and eager to please dog but he will need early socialization and training to avoid some aggressive tendencies.

The Olde Pit Bulldogge is not a dog for everybody but he can be a very rewarding pet to own. You need to be prepared to do the socialization and training, give him the exercise he needs and love him! The ideal owners will be prepared for that and have experience in dog ownership already.

Where does the Olde Pit Bulldogge come from?

In most mixed breeds who fall under the Designer dog umbrella the offspring are the result of a two purebreds being bred together. The Olde Pit Bulldogge is the offspring of the purebred the American Pit Bull Terrier and what was at the time a mixed breed the Olde English Bulldog. The Olde English Bulldog was bred in the 1970s using dogs such as the American Bulldog, English Bulldog, Bullmastiff and American Pit Bull Terrier. While at the start of this breeding the Olde English Bulldogge was technically not a purebred, in fact as of about a year ago he was accepted by the AKC. When buying any designer dog make sure you research the breeder and visit the kennels as there are a lot of poor breeders out there just trying to make money who have no care about their dogs.

In England up until 1835 a popular spectator sport was bear and bull baiting. Dogs were bred and used to bait these animals and then later became dogs fighters when that was banned. This meant they were bred to be aggressive, courageous, tenacious. But they were also bred to never bite their handlers so that the humans involved did not have to worry about being attacked. When they were brought to America they were used on farms to hunt game and to guard the property. They were bred to be larger too. Breeders also focused on developing a dog who remained strong and courageous but was also family friendly and gentle.

Today we see their success. The dog when he comes from a good breeder, is confident, alert, friendly, courageous, and very loyal and affectionate. This dog too would happily try to be lap dog despite his size. He will protect you and his family if there is something putting them at risk.

In the 1970s a breeder called Leavitt tried to recreate an older breed from the regency period and developed the Olde English Bulldog. He worked with English Bulldog, American Pit Bull Terrier, Bullmastiff and American Bulldog. It was not recognized by the AKC until very recently so is a newly acknowledged purebred.

He is a docile but protective dog who may look fierce but is not aggressive. He is strong and powerful, friendly and affectionate with family and friends. He loves to chew so make sue he has lots of toys you can rotate through. He is eager to please and fairly easy to train. Early socialization and training are important and he needs either work to do or lots of exercise.

The Olde Pit Bulldogge likes to please which helps with training. He is loyal, lively and a good family pet with early socialization and training. He is very affectionate with his family and friendly with friends visiting but wary of strangers. Without socialization and training he can have problems in behavior and that can include aggression. He is a good watchdog being alert and brave. He has a fair amount of energy too.

He is a medium to large sized dog weighing 40 to 80 pounds and measuring 17 to 22 inches tall. He has a strong powerful body, a broad head, deep chest and almond shaped eyes. His ears can be small to medium in size and are flappy. His fur is straight, short, smooth and a little stiff. Common colors are cream, chocolate, gray, black, white, brown, and a mix of any.

How active does the Olde Pit Bulldogge need to be?

He will need regular exercise to help keep him calm and healthy. A daily long walk, a run, trips to the dog park, some play time are all things he would enjoy. Remember he needs some mental stimulation as well. It would be nice if he also had access to a yard to play in.

He is moderately easy to train, he will not take longer than other dogs but nor will he be super fast to train. Mostly that is because he really needs someone with experience to train him. He needs to be shown clearly who the pack leader is. Be firm, consistent and make sure you are clearly the dominant one. Early socialization and training are important for this breed. Being dominant does not mean needing to use harsh methods or physically hurting them. You can still use positive methods, reward him, praise him, encourage him.

Living with an Olde Pit Bulldogge

He will have moderate shedding so you will have to clean up after him and brush him daily. His coat is easy to groom though with a solid hair brush. Bathing should just be done when he needs it using a dog shampoo. Check his ears once a week for infection and wipe them clean. Do not insert anything into his ears. Also brush his teeth at least twice a week and clip his nails if they get too long. His nails can be done by a professional groomer if you do not know how.

As made clear early socialization and training are key for this dog especially if he is going to be around other dogs, children or animals! When it is not done he can be aggressive towards them and cannot be trusted to be left alone with them. When raised with them, socialized and trained though he is affectionate, protective, gentle and playful.

He is alert and makes a good watchdog who is likely to act to protect you should there be a real threat. He is a rare barker and will need 3 to 4 cups of good quality dry dog food, divided into at least two meals a day. He is better in moderate climates.

Ask to see health clearances when buying a dog, whatever type you are getting. It means his parents did not have any illnesses they can be prone to which gives the offspring better odds too. Only good breeder would be happy to show you them as well as allow a visit. The health issues the Olde Pit Bulldogge might be at risk of include hypothyroidism, heart disease, bloat, eye problems, hip dysplasia and allergies.

A puppy will cost between $200 to $750 and along with the puppy you will need to pay out for blood tests, deworming, shots, neutering, micro chipping, a crate, collar and leash and so on. These come to between $450 to $500. Average annual medical expenses will be $485 to $600 and that covers just basics like vaccinations, flea prevention, check ups and health pet insurance. Average non-medical expenses will be $510 to $600 for basics that include training, license, treats, food and toys.

Looking for a Olde Pit Bulldogge Puppy Name? Let select one from our list!

The Olde Pit Bulldogge is not a dog for everybody but he can be a very rewarding pet to own. You need to be prepared to do the socialization and training, give him the exercise he needs and love him! The ideal owners will be prepared for that and have experience in dog ownership already.