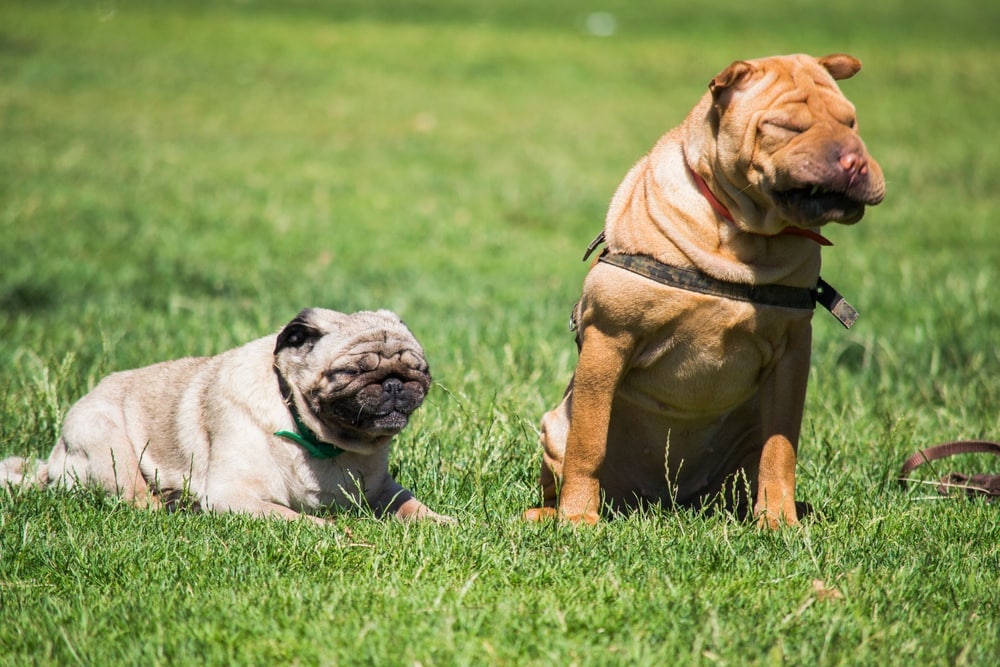 The Ori Pei is a small to medium mixed breed dog being a cross of the Pug and the Shar-Pei. She is also called the American Ori-Pei, Pugpei, Sharpug and Pug-A-Pei. She has a life span of 12 to 15 years and is a charming and smart dog who can also be very headstrong.

Where does the Ori Pei come from?

This cross breed is part of a growing trend for so called designer dogs. Mixed breeds are nothing new, you have mixed dogs in rescue shelters, and all purebreds are the result of mixing at some point in its history. Designer dogs are newer though and have reached huge popularity with celebrities and public alike in the last two decades or so. They tend to be the result of deliberately breeding two purebreds together to create a new mixed breed not really seen before. Often they have a cute blended name too. Some are done with thought and for a reason, most are not. Some are bred by good breeders, many are not. When looking at designer dogs for a pet make sure you research the breeder and visit them.

In most cases we do not have much if any information on the origins of the mixed breed but for the Ori Pei we actually do. The Ori Pei is one of the older designer dogs bred in America in the 1970s by a breeder called Aaron Silver. He was fond of the Shar-Pei but did not like all the health issues she had and wanted a smaller version of her. That is why he chose the Pug to breed her with. The result is the Ori Pei. In most designer dog cases they are a first generation. They are the direct offspring of the Pug and Shar-Pei. First generation dogs are less predictable as any mix of either parent could end up in the offspring. Being from the 1970s the Ori Pei has been around a little longer than many designer dogs and has had the chance with some breeders to reach 6th generation. This means predicting their looks and temperament is just a bit more reliable.

Pugs are Chinese and are a very old breed that can be found as far back as 206 BC. Emperors greatly valued them and they were pampered completely. When trading with Europe began in the late 1500s Pugs came over with Dutch traders. They became popular throughout Europe with the wealthy. He was known by different names in different countries, Mop in Germany, the Carlin in France and the Caganlino in Italy. His popularity continued into the Victorian era and he came to the US after the Civil War. While they were popular initially they eventually did fall out of favor.

The Pug’s purpose was never to be any kind of working dog like a hunter, ratter or even retriever. He was bred to be a companion and that was all. That is what he still is today. He will be quite content to sit in your lap all day if you let him, he expects your devotion and in return he will be devoted to you also. He can still be playful but is a far calmer dog than many!

The Chinese Shar-Pei comes from Southern China where he was bred to fight, guard, hunt and herd. It is not known how old he really is. When the People’s Republic of China was formed the whole dog population in the country nearly disappeared including the Shar-Pei. However thanks to some being bred in Taiwan and Hong Kong and to Matgo Law for bringing some to America in 1973 this breed survived.

Today the Shar-Pei is an independent and strong willed dog but also very devoted and protective. He is aloof with strangers but loves the company of people he does know. He prefers spending all his time with his owner, is calm and can be intuitive. Sadly he was once used in dog fighting and he can sometimes still have an aggression towards other dogs so good socialization and training are important.

The Ori Pei is smart and a quick learner who is full of curiosity and has quite a sense of humor! She can be headstrong but is very loveable and devoted. She will use whatever tricks she has, her charm, her willfulness or her humor to get your attention when she wants it. She is very clingy and wants to be with you at all times. She will want to be part of everything and may even negatively if she feels left out. She can snore sometimes and is outgoing and affectionate. She can be too bold sometimes which means she can get herself into trouble. She gets on very well with children and inside is calmer than she is when outside. She can be protective and loves to have a nap and a snuggle with you. She does not do well being left alone for a long time.

She is a small to medium sized dog weighing 15 to 30 pounds and standing 12 to 15 inches tall. She can have wrinkles like the Pug though not as prominent. She has a stocky body with a large head that is rounded, dark eyes and a muzzle that is squared. She has ears that are thin and are either button or rose shaped. Her tail curls and she has a coat that is short, soft and smooth. Common colors are white, gray, black or brown.

How active does the Ori Pei need to be?

She is a fairly active dog so is not for owners who are not prepared to go out daily and have a good walk or two with her. She would enjoy trips to a dog park, a couple of moderate walks and some play time for example. She can live in an apartment without access to a yard. She is not good in extreme weather so take care when it is time to exercise her.

She is intelligent, she is inclined to listen and eager to please. These things make a dog easy to train and often they learn more quickly because they need less repetition. However as mentioned she does have a headstrong nature too and that can sometimes hinder training for some owners. Training and early socialization are important but it needs to be done positively and with a gentle approach. Be positive, firm and consistent and you will get much better results than loosing your temper and being impatient.

Living with an Ori Pei

She can be hypoallergenic and she is a low grooming dog only needing to be brushed two to three times a week. She does shed but usually only a minimal amount thought sometimes that can go up to a moderate amount. She will need her wrinkles cleaned out regularly to avoid infection and they need to be kept dry too. Bathing should just be done when she really needs it and again drying after is important. Check her ears once a week and wipe them clean, brush her teeth at least two to three times a week and clip her nails when needed.

With early socialization and training she is very good with children being playful and loving towards them. She is likes to play with other dogs but has a tendency to chase smaller animals like cats though she is not normally aggressive towards them, she just likes to hunt!

She will bark occasionally and is best suited to very temperate climates as she is not good in heat or cold! She will need to be fed high quality dry dog food amounting to 1 1/2 to 2 cups a day divided into at least two meals.

When you buy your puppy you need to ask to see health clearances and you should buy from a trustworthy breeder. This will help ensure your dog is a healthy one. Though she was bred to be a smaller and healthier version of the Shar-Pei she still has the possibility of being prone to the same health issues either or both parents are also prone to. They include brain problems, epilepsy, nerve degeneration, eye problems, staph, Legg-Perthes, patellar luxation, vaccination sensitivity, shar-pei fever, hypothyroidism, cancer, bloat, OCD, skin problems, allergies, mange, yeast infection and elbow and hip dysplasia.

An Ori Pei puppy can cost between $850 to $3000, a wide range so look around carefully before making your choice. There are other initial costs such as blood testing, deworming, chipping, spaying, vaccinations, a crate, a carrier, collar, leash and food bowls. Some of these may be included with the puppy price but if not will come to between $455 to $500. Owning a dog is a monetary responsibility too and there are ongoing costs to pay for. Just the basic medical needs of check ups, shots, flea preventions and pet health insurance will cost between $460 to $500 a year. Basic costs for other needs like food, toys, training, treats and license will come to between $455 to $550 a year.

Looking for a Ori Pei Puppy Name? Let select one from our list!

The Ori Pei is a great dog for apartment dwellers, families without other pets and people who cannot be overly active for whatever reason. She has a great personality and will be a rewarding dog to own. Be prepared for possible stubbornness and also for her charming you into being her devoted slave!