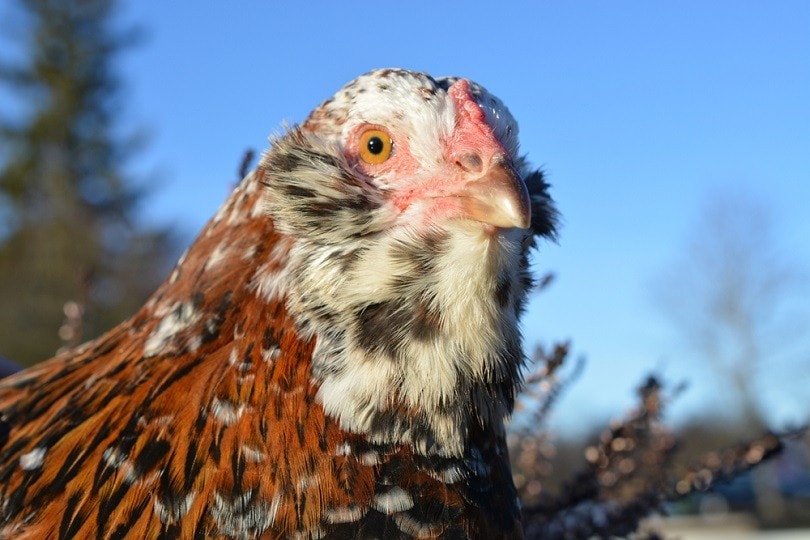 Breeders named the Orloff chicken after the Russian Count, Alexei Grigoryevich Orlov. He promoted the breed and is the reason it spread throughout the rest of the world. However, nowadays, its numbers are dwindling. You can find this bird on The Livestock Conservatories list of critically endangered animals. Keep reading to learn more facts about this rare chicken to see if it would make a good fit for your farm.

Orloff chickens originated in Persia, and you could find them in Europe and Asia by the 17th century. Count Orloff promoted the breed, and Germany further refined the species in the 1920s, even creating a smaller Bantam breed.

The Orloff chicken is extremely resistant to cold weather and can survive temperatures that would kill other breeds. However, its gamey appearance caused it to lose out to more attractive birds. Most owners use it for its meat due to its large size and relatively low egg production that caps out at around 100 per year.

How Much Do Orloff Chickens Cost?

You can expect to pay between $5 and $12 per chick, depending on where you live and how many you buy at once. Large lots of 50 or more chicks are often much less expensive than a single chicken. It might be hard to find a breeder because of their rarity.

Orloff chickens are calm and friendly. This breed likes free range but handles confinement well and is easy to manage. It’s quiet and doesn’t get aggressive toward other chickens or people. It does not usually become broody and lays eggs even in cold weather, long after other, more productive breeds have stopped.

The Orloff is a gamey-looking bird with plenty of plumage to protect itself from extremely cold temperatures. It has tiny earlobes and a small walnut-shaped comb. This comb resists frostbite better than other breeds with long dangly combs, and it’s another reason this bird can handle cold temperatures.

The Orloff is a large and plump chicken that often weighs up to 9 pounds, so owners usually keep it for its meat. It has yellow skin and yellow legs and feet. The feathers are typically red, white, or spangled.

How to Take Care of Orloff Chickens

It’s too heavy to fly very far, so you can allow your Orloff chicken the freedom to roam around in a fenced-in area. Any standard fence should be fine as long as there are no large gaps. You will also need to use caution if you live in an area with birds of prey like the hawk that might come down and attack your chicken. Dogs can also get through many fences, so you will need to make sure there are no loose or stray dogs in the area that might try to get through the fence to attack your bird.

Do Orloff Chickens Get Along with Other Pets?

Yes, the Orloff chicken is a very timid bird that is friendly toward humans and other birds. It never becomes aggressive, even when pressed, and will always prefer to retreat to the shelter of its coop. It’s also too large for most house cats to bother with, but you may experience problems with some breeds of hunting dogs that will be unable to resist chasing your Orloff chicken, so you will need to separate them. Orloff chickens have no defense against a dog, and they cannot fly to getaway.

What to Feed Your Orloff Chicken

Your chicken will eat plenty of chicken feed once it reaches adulthood. Before that, you will need to feed the chick a product called Chick Starter, which will help boost your chick’s immune system and supply other nutrients so it can grow faster and healthier. You will also need to provide your Orloff chicken with a calcium supplement that they can consume at will to help provide energy and boost the immune system.

If you allow your Orloff chicken to roam freely, it will scratch and pick at several different seeds from a wide variety of plants. This can lead to better nutrition and a healthier chicken.

Orloff chickens are healthy birds and shouldn’t be too hard to keep healthy. Lice, mites, and other parasites are the biggest problem because they are difficult to get rid of and can spread to other chickens in the coop. You can use several commercial products to eliminate the problem, and you will add these products to their dust bath.

You will also need to watch out for worms, which are less common but more serious as they can damage internal organs. Regular deworming medication administered to your entire flock can help reduce the risk of infection. You will often notice symptoms like lack of appetite or excessive sneezing that can clue you in that there might be a problem. Learning your chicken’s behavior is the best way to detect a problem early enough to fix it before other problems occur.

Many experts encourage the breeding of Orloff chickens because their numbers are so low. You can be a part of the solution and help bring them back by taking on a breeding program. However, you might find it difficult to find good stock because of the low numbers and lack of favor. However, if you understand genetics, breeding these birds can result in a profitable income.

Are Orloff Chickens Suitable For You?

Despite their gamey appearance, Orloff chickens make a great addition to any chicken farm. This breed is friendly and docile enough to be a backyard pet, and its large size will give plenty of meat when the time comes. It doesn’t produce many eggs, but it will continue to lay them in cold weather when other chickens have stopped, which is helpful if you rely on their brown eggs for food. It can withstand extremely cold temperatures, so you don’t need to worry much about the coop you are storing it in. If you decide to breed these birds, you can create a nice income for yourself while helping the world protect and save an endangered species.

We hope you have enjoyed reading over our look into this endangered chicken and learned some new facts. If we have convinced you to give one of these birds a try on your land, please share this guide to Orloff chickens on Facebook and Twitter.