Painted Turtle vs Red-Eared Slider: What’s the Difference? (with Pictures) 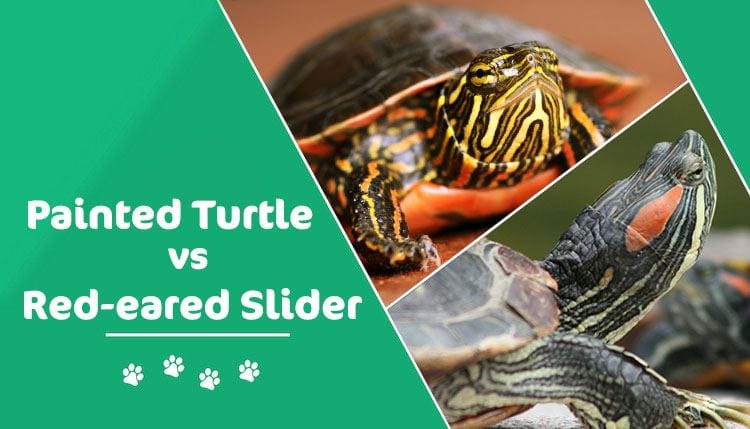 Choosing the right turtle can be quite tough. It’s not just as simple as picking a turtle out of a pond, putting them in a tank, and feeding them lettuce. (Although, they might enjoy the lettuce.) Wild turtles don’t do well when plucked from their homes and put into captivity. So, it’s best to pick one up at a local pet shop or trusted breeder.

But what turtle should you opt for?

There are several species of turtle available, but two of the most common are the painted turtle and the red-eared slider. Read on to find out if either of these is the right pick for you.

Along with being one of the common turtle breeds in the United States, the painted turtle is also among the most beautiful. These turtles are painted with vibrant striping all over their bodies and shells—thus the name. There are four main types of painted turtles: the eastern painted, midland painted, western painted, and southern painted. Each has distinct markings and sizes that set them apart.

Although there are differences amongst the varieties, they share the same basic habits and care requirements. The painted turtle is a small to medium-sized turtle with the males being the smaller of the sexes. Adults typically require a 20-gallon tank to themselves; however, if you want to keep multiples, you should increase tank size by 10 gallons per turtle or use separate containment systems.

Like most turtles, painted varieties require strict lighting and temperature requirements to be followed to be their best. Their tank water, ambient air, and basking area temperatures all need to be maintained at different setpoints. This can make them relatively difficult for those new to reptiles to maintain.

Painted turtles are omnivores, which means they eat both plants and animal matter equally. And you should maintain that diet when holding them in captivity. A steady diet of insects and leafy greens will help keep them full, but we recommend using actual turtle food. This will ensure that your painted turtle will obtain optimum nutrition.

As we mentioned earlier, there are four different varieties of painted turtles each with its own attributes. Let’s take a closer look at them now.

The painted turtle isn’t immune to disease and has its fair share of issues. The most common problem most people have is parasites. These are found within reptile internals naturally; however, keeping a clean tank can bring parasitic issues to a minimum. These can be rooted out via fecal parasite exams. Infections are another common problem that plagues these turtles. Again, these can be prevented by maintaining a hygienic tank.

Serious issues include metabolic bone disease and hypovitaminosis A. Both of these deficiencies are caused by a lack of proper vitamin nutrition—calcium and vitamin A respectively. By feeding your painted a properly crafted turtle food, you should be able to minimize the chances of your turtle developing these disorders.

If you’re looking to get into raising turtles, the painted turtle is a great place to start. They’re not as common as the red-eared slider, but not as large either. Their smaller size equates to a smaller tank and an easier habitat to clean and maintain.

The red-eared slider is a turtle native to the United States that has quickly made itself known around the world. They are among the most popular reptile pets on the planet and have been imported as pets into most countries. Unfortunately, due to irresponsible breeding and releasing the red-eared slider has become one of the world’s most invasive species, taking over ponds, waterways, and other ecosystems.

One of the main reasons many people release their red-eared sliders back into nature is because they’re not ready for the size that this species will grow to. Like most turtles, red-eared sliders start small and adorable. And to a new pet owner, it may be difficult to imagine how much bigger they’ll get. However, a fully grown adult can grow to a foot in size and weigh over 6 pounds.

A turtle of this size requires a large tank to properly thrive. Although you can start these turtles in 10 or 20-gallon tanks, we recommend at least a 50-gallon tank for a single fully grown adult. If you plan on keeping more than one turtle, you should add at least an additional 20 gallons per turtle. Fortunately, red-eared sliders can be safely kept in captivity with other turtles—same species or different—without too much fear of territorial fighting. However, it’s best to keep a close watch as every turtle is different.

Red-eared sliders can come in a variety of colors and patterns. However, the trademark red striping where their concealed ears are is normally present. They are also initially quite affordable regardless of their color morph—typically around $20. However, that price will increase exponentially as they grow larger and you factor in the cost of the necessary equipment to house and feed them.

Turtles are cute, little reptiles that are great to observe. However, they’re not necessarily the cleanest of animals. In fact, if left unchecked, turtles can become very messy. This can lead to a ton of potential health problems for both you and your turtle. A dirty tank can lead to bacterial, fungal, and parasitic growth that contributes to shell rot, diarrhea, and other disorders.

Also, turtles are notorious carriers of salmonella—and red-eared sliders are no exception. Most turtles harboring the disease don’t show any outwards signs either. That’s why it is super important to ensure you thoroughly wash your hands after handling your turtle or cleaning out its tank.

If you plan on breeding your red-eared sliders, it’s not going to be as easy as you think. You can’t simply put a mature male and female together and expect nature to take its course. To start the breeding cycle, you’re going to have to set the mood and mimic their natural environment as closely as possible. This includes prepping them for hibernation, adjusting ambient (or tank) temperature, and providing proper sustenance. And only then are you ready to attempt the mating process.

Red-eared sliders are great for those who are ready to handle a larger turtle at home and understand the responsibility of turtle care. They are great reptiles to observe; however, they shouldn’t be constantly handled.

Which Species is Right For You?

Each of these different turtles has unique attributes that make them better for some over others. If you’re new to the turtle game, we recommend going with the smaller painted turtle. While they may be a bit more finicky when it comes to temperature and lighting requirements, they’ll occupy a smaller habitat. And this makes them much easier to clean and learn the basic responsibilities of keeping turtles.

However, if you’ve already got experience with smaller turtles and are looking for a larger one, the red-eared slider makes a great addition to any turtle enthusiast’s home. They’re wonderful to look after and great company to keep.