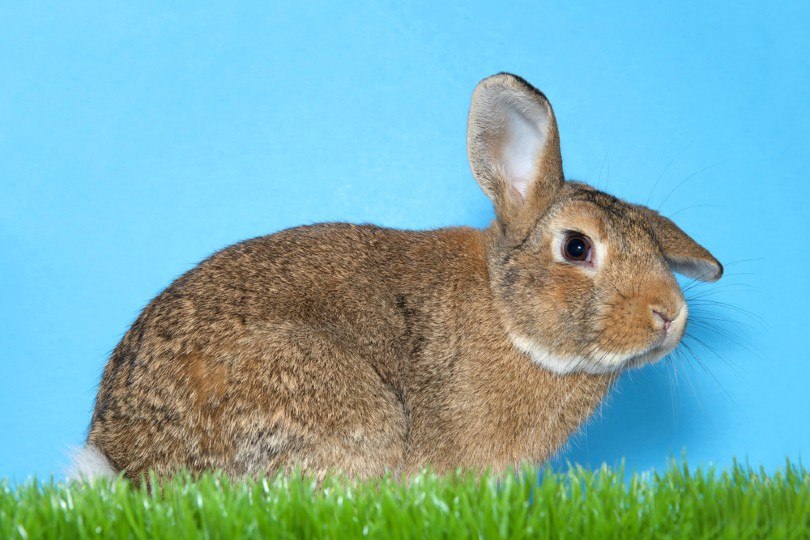 The Palomino is a medium-sized American-bred rabbit that was developed in the 1950s. Since then, Palominos have gone on to become some of the most popular pet and show rabbits, thanks to their sweet disposition and striking appearance. Here is everything you need to know about the Palomino rabbit.

Quick Facts about the Palomino Rabbit

The Palomino rabbit was developed almost by accident by a breeder called Mark Young in the 1950s at the Lone Pines Rabbitry. For a long time, Mark had been trying to create a breed that would put their rabbitry on the map, but to no avail.

As a last-ditch effort, he decided to create a breed that would at least get recognition by the American Rabbit Breeders Association (ARBA). This led to Mark crossbreeding many rabbit breeds. He used so many breeds that he lost count of what went into creating the Palomino Rabbit.

Nevertheless, he eventually stumbled upon a fur color that he fancied, naming the new breed “Tawnie.” Mark kept at it, refining the Tawnie until it came to be the Palomino. However, at the time, he called it the “Washingtonian.” It was only after it became recognized by the ARBA that it came to be known as the Palomino rabbit.

However, Young did not state the purpose of the Palomino. It seems as though he was simply breeding different types of rabbits to see what he could come up with. Nonetheless, since Lone Pines was a commercial rabbitry, and the Palomino just happened to have a commercial body, one would assume that the Palomino was created for meat production.

Today, while some keep the Palomino rabbit for meat production, it is more popular as a pet and show rabbit.

How Much Do Palomino Rabbits Cost?

The price of Palominos varies significantly depending on their purpose, as well as the breeder. Pet Palomino rabbits tend to be much cheaper, costing around $30 on average. However, show and breeding Palominos are costlier, selling between $100 and $400.

The best place to look for a Palomino is at a rabbitry, as they are professionals. Buying from a professional breeder is your best chance of getting a genuine, healthy rabbit. Therefore, if you can, avoid purchasing your animal at the pet store.

Palominos are docile, friendly, sociable, and love being around people. This is why they make such wonderful pets. They even get along with children, as long as you teach kids how to handle them properly.

However, due to their social nature, they require lots of time outside of their hutch. This allows them to have enough exercise. Locking your Palomino inside their hutch will make them lonely and depressed, resulting in a shorter lifespan.

Therefore, if you have enough space, consider getting them an outdoor enclosure which they can run around in. Additionally, make sure that they have toys to play with. While some animals are content with cardboard pieces or wood, others can be picky.

Therefore, experiment with various toys to find what your bunny loves. Nevertheless, always respect your pet’s personal space, especially when they are still new to your home. This will allow you to gain their trust much faster.

Like other rabbits, Palominos are typically active in the evening, which is when you should feed them. If you have space and resources, consider getting them as a pair or more, as they thrive on social interactions with other rabbits.

As mentioned, the Palomino is a medium-sized rabbit, as adults rarely weigh over 10 pounds. There are two varieties of the Palomino, the Golden and the Lynx. The only difference between these varieties is color. Additionally, both sport a white undercoat.

How to Take Care of the Palomino Rabbit

The following are some of the things you need to take good care of a Palomino:

Get a high-quality, spacious enclosure where your Palomino will spend their time when they are not roaming around. While the ideal size of the enclosure will vary depending on the size of your rabbit, most adult Palominos require a cage that is at least 12 square feet.

A good-sized enclosure should be tall enough to allow your rabbit to stand on their hind legs without their head touching the ceiling while being long enough to allow them to make at least 3 hops.

Considering that the enclosure is where your rabbit will be sleeping and eating, it should have the necessary supplies for your pet. These include a litter box, a box for resting in, and dishes for food and water.

As mentioned, Palominos need sufficient space for play and exercise. If you are not able to dedicate a room for that purpose, a puppy exercise pen should suffice. Place some toys, as well as a litter box inside the pen to ensure that your pet has everything they need.

If you can afford to dedicate a room or rooms where your pet can roam and play, they will appreciate it immensely. However, you will need to rabbit-proof the spaces due to their chewing habits.

For starters, cover all electrical cords with a spiral wrap or stiff plastic tubing, and then keep them out of sight or reach. This is because Palominos will chew exposed cords with disastrous consequences, given the opportunity.

Next, protect or move wooden surfaces. As is the case with other rabbits, the Palomino’s incisors never stop growing. As such, they need to keep chewing and gnawing on wooden objects to trim their teeth. This is why wooden chew toys are essential for pet rabbits.

Do Palomino Rabbits Get Along with Other Pets?

Despite their social and docile nature, Palominos are prey animals, after all. This means that they have a deeply ingrained fear of carnivores, such as dogs and cats. Therefore, to avoid stressing them out, consider restricting such interactions.

What to Feed Your Palomino Rabbit

Being herbivores, Palominos eat vegetables, fruits, and greens. However, 70% of their diet should consist of hay, with Timothy grass hay being ideal. Alfalfa and clover hay is not suitable for rabbits. This is because their calcium and protein levels are too high for rabbits.

We found Food from the Wild by Kaytee to be one of the best commercial foods for Palomino rabbits. Consisting of carrot, marigold, rose petal, Timothy hay, among other healthy ingredients, this food is formulated to mimic a rabbit’s natural diet. Moreover, it also has natural probiotics for boosting your bunny’s digestive health.

Most importantly, make sure that your Palomino always has access to fresh, clean water.

You must ensure that your bunny is in good health at all times. The best way of ensuring this is by scheduling regular vet visits. But since your rabbit can get ill between vet visits, it is crucial to know the signs of illness in Palominos. They include:

Take your pet to the vet immediately if you notice those symptoms.

Palomino rabbits reach sexual maturity as early as 4 months old. Like other rabbits, Palominos reproduce at a tremendous rate. This is because the release of eggs in Palomino females does not depend on a hormonal cycle but sexual intercourse. This makes Palomino receptive for about 14 of 16 days.

After breeding, a vet can feel the developing fetuses in a pregnant doe in as little as 12 days. It is crucial to consult your vet during this period, as false pregnancies are prevalent among these rabbits.

The gestation period lasts about 31 days, after which they give birth to an average of 4 kits. If your rabbit does not give birth within 33 days, take them to the vet immediately so they can induce labor. If you don’t, there is a good chance that your doe will give birth to a dead litter.

Are Palomino Rabbits Suitable For You?

Palomino rabbits are a good fit for almost anyone, as long as you have the time and space to house them. They are docile, outgoing, and tolerate occasional handling.

Even though Palomino rabbits might not be as well-known as some rabbit breeds, they are not any less fantastic. They are an excellent choice for households looking for a different kind of pet.