10 Parakeet Sounds and Their Meanings (With Audio) 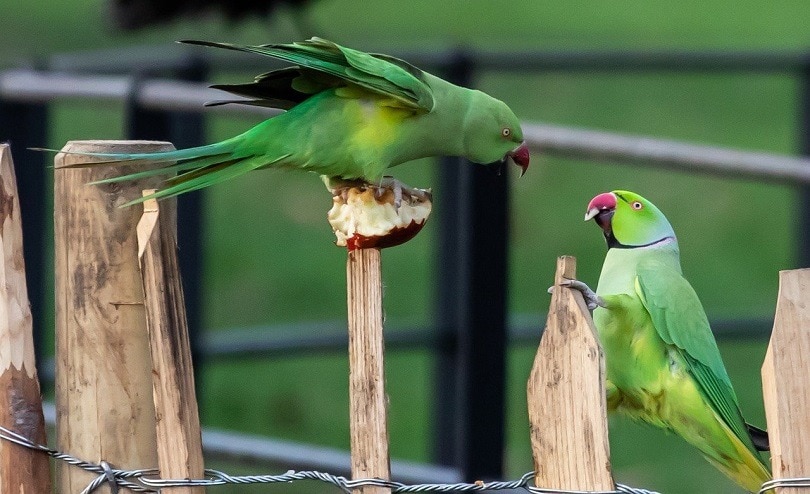 Parakeets are characterful birds, and one of the best things about owning them is how they communicate with us! These little guys are one of the most vocal parrot species, so they’ll always let you know how they’re feeling.

If you’re been curious about what the sounds that your parakeet makes might mean, we’ve rounded up the 10 most common parakeet or budgie sounds, as well as their meanings.

Whistling is a sign that your parakeet is happy and healthy. It’s extremely easy to teach your parakeet to whistle, but if you’d also like to teach them to talk, it’s best to tackle that first. Whistling is easier for your bird to accomplish, so if they learn how to do it first, they may decide talking is just too much effort!

Parakeets love to chirp, and you’ll have to get to know your bird to figure out exactly what their “happy chirp” sounds like. This noise basically means that everything is well in your little bird’s world. In the wild, chirps are used as a way for flock members to reassure each other that everything is well and good. Don’t be surprised if your parakeet chirps away to themselves (and you!) all day long.

Parakeets love to chatter, and this can be less distinct than when they’re talking and pronouncing specific words. It may sound like they’re chattering away to themselves, perhaps practicing a tricky new word that you’ve taught them. A happy parakeet who’s chattering will usually be sitting on their perch with their feathers puffed up in a sign of happiness. Male parakeets will often chatter to females as a way of gaining their attention and affection. Parakeets often chatter into their mirrors, and of course, the other bird they’re chatting to is incredibly attentive!

Singing is a good sign that everything is well in your parakeet’s world. They may combine chirps, chirrups, whistles, and other noises into a constant stream of singing. Parakeets will sing to each other to show that they’re safe and content, so they often do the same for their owners!

This can be thought of as a happy and content sound, similar to a cat purring. A parakeet that’s grinding their beak is likely getting ready for settling down for a nice sleep.

This noise sounds like a hiss or “tssk,” and parakeets may use it to warn off someone who has invaded their space. If you have multiple birds in one cage and you hear them chiding each other regularly, it may mean they don’t have enough personal space.

The chirp is a versatile noise that can also be used to signal discontent. Your parakeet may chirp to remind you that their food or water bowls need refilling or simply demand that you pay them some attention. Chirps that become louder and more like a “tweet” noise mean that your parakeet is becoming excited about something that’s going on, whether that’s seeing birds outside the window or seeking reassurance from you or other parakeets that they live with. Unhappy chirps can escalate into squawking if whatever has been bothering your parakeet isn’t resolved.

Parakeets will start to squawk if they’ve sensed something amiss. They may sense a predator (the next door’s cat on the window sill!) or have got themselves in a state because no one has remembered to fill up their food bowl. If you have hen parakeets in the mood for mating, sometimes their hormones can also make them squawk. A calming voice and some attention to see what the problem is can make a squawking parakeet feel reassured, as can covering their cage for a short while.

Parakeets are often making some kind of happy chirping or whistling noise, but a scream can be thought of as a bit of an alarm call. Some parakeets might occasionally experiment with making this sound, but if you do hear your parakeet screaming, they may be distressed or in pain.

Parakeets can talk by mimicking the sounds that they hear around them. Repeating words can be a great way to get them accustomed to what words you want them to say. Talking to you shows that your parakeet is paying attention to you, as well as trying to get your attention! Generally, male parakeets learn to talk more easily than females and often speak more clearly.