Parrot vs Macaw: What’s the Difference? (With Pictures) 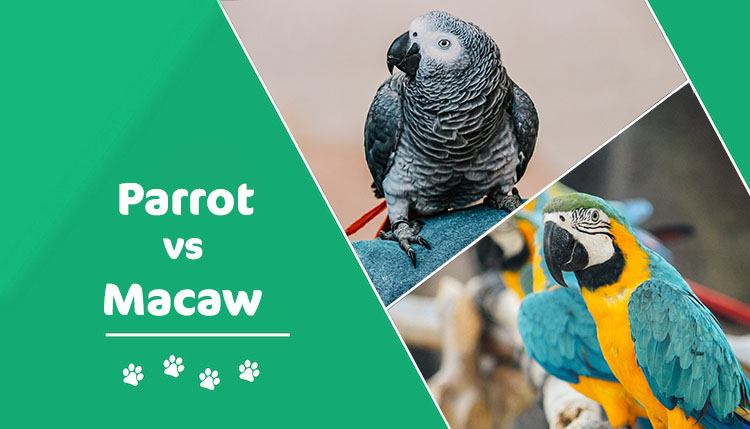 If you ask the average person the difference between a parrot and a macaw, they probably won’t be able to tell you. These are both colorful species of birds with big beaks and above-average intelligence. What you may not know is that they’re very closely related. In fact, macaws are actually a type of parrot!

There are a total of 350 different parrot species. Many of the popular birds kept as pets are parrots, though you might not know it. This includes cockatiels, cockatoos, parakeets, and of course, macaws. Macaws are a pretty large group on their own, made up of 17 different species that are still around, plus a few that are now extinct.

Though macaws are parrots, there are still some differences between macaws and other parrot species. So, let’s take a closer look at each and see what similarities and differences we can find.

Colorful and intelligent birds, parrots have been kept as pets since back in ancient times. They make exciting pets since they’re brimming with personality. Parrots bond closely with their owner, which makes them even more endearing.

Hundreds of birds belong to the parrot family, ranging drastically in size and shape. While most people think of parrots as large birds, there are many tiny members of the family. Take Pygmy parrots for example. These little birds are highly colorful, like most parrots, but they top out at 3.5 inches long and weigh less than half an ounce when fully grown!

Still, there are plenty of parrots that are pretty large birds. One of the most popular of all parrots is the African Grey. These birds are more than 12 inches long and can weigh over two pounds, making them many times larger than the tiny Pygmy parrot.

Lifespans vary just as much as size when discussing parrots. Some of the smaller birds in the parrot family have average lifespans of around 10 years. Plenty of mid-sized parrots have projected lifespans of 20 years. But some of the largest and most popular parrots have impressive lifespans that can reach past 30 years.

If you ask the average person what they know about parrots, the most common response is likely something having to do with them talking. This is one of the reasons that parrots have become so popular; they’re great at mimicking.

Most people think that parrots talk, but that’s not quite true. First of all, only a few parrot species are even capable of speaking words. But even these species aren’t truly talking. They’re actually mimicking sounds that they hear. You’ll also hear them mimic sounds like doorbells, the phone ringing, or even commercials you hear on TV!

Parrots are a great option for anyone who has plenty of time to provide attention for their bird. While they do make great pets, parrots can also be very demanding. They also tend to get jealous, which can sometimes make it difficult to carry on normal relationships with other people!

As mentioned, macaws are a type of parrot. There are quite a few different macaws though, and they all have their own interesting traits.

Just like other parrots, macaws can vary drastically in size and weight. The smallest of all macaws, the Hahn’s macaw, also known as the Red-shouldered macaw, weighs just 5 ounces as an adult. From head to tail, they’re about 12 inches long on average.

But compare that to the Hyacinth macaw, a rare bird that nearly went extinct in the 1980s. These are the largest macaws of all, with a maximum length of 3.3 feet from head to tail. They can weigh nearly four pounds! Hyacinth macaws are so large that they’re not just the biggest macaws; they’re the biggest parrots in the world!

Macaws have incredible lifespans. All macaws have a life expectancy of 30 years or more. Even the smallest macaw, the Hahn’s macaw, is expected to live to 30 years old. Just like other parrots, larger macaws tend to live longer. The Hyacinth macaw can live for more than 50 years! A pet like that might even outlive its owners.

Not all parrots mimic, but all macaws do. They might not all mimic your speech, but all macaws will mimic sounds that they hear. Some macaws, such as the blue-and-gold macaw, are known to be quick learners, able to mimic complex sounds and learn many words.

Like all parrots, macaws are a good fit for someone who has ample time and energy to devote to their bird. These are demanding pets and they need loads of attention. And while the mimicking can be very cool, it can also become annoying, so a patient owner is a must.

Which Breed is Right for You?

Comparing macaws and parrots is difficult. They’re part of the same family, which is filled with hundreds of different breeds of birds. They might all be parrots, but there’s a huge difference between a Pygmy parrot that weighs less than an ounce and a Hyacinth macaw that weighs nearly four pounds!

There are incredible macaws and parrots available that can mimic your words and are full of bubbling personalities. Smaller varieties are often easier to care for but don’t live as long and often don’t mimic. On the other hand, larger varieties of both species tend to live long lives and have ample intelligence for mimicry.