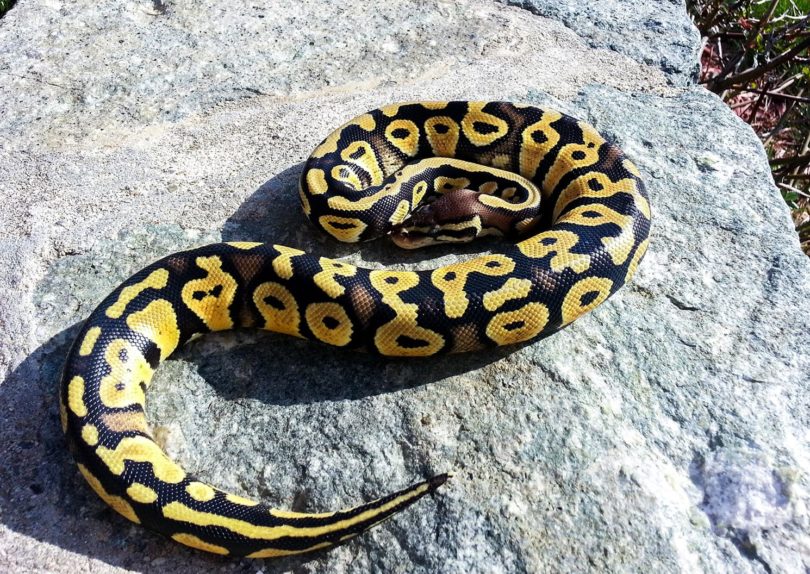 Pastel ball pythons are brightly colored morphs that are calm and friendly. They are considered suitable for experienced and novice keepers. The species is a constrictor that, in the wild, would hunt birds and small animals, especially rodents, at night.

The medium-sized snake lives about 30 years in captivity and their placid nature means that they survive and thrive well in captivity, with the biggest challenge being their reputation as picky eaters.

Docile and reasonably low maintenance, the pastel ball python is considered a good pet snake. It can take time to build trust between a ball python and a human, but once that trust is built, the species seems to enjoy being handled. Until a rapport has been built, however, the species can be shy and may hide away from you. Don’t try and rush things, and avoid handling the snake before feeding, or if yours looks like it is going to try and strike you.

The pastel morph has codominant genes that produce bright snakes. The brown pigment usually found in ball pythons has been replaced by a yellow pigment. This can vary from dark yellow to an almost orange color. So-called blushes occur where the otherwise distinct dark pattern has faded.

The eyes of the pastel python tend to be lighter in color, often in a green or gold color.

How to Take Care of Pastel Ball Pythons

Ball pythons are generally considered low-maintenance snakes, and they are one of the species preferred by first-time snake keepers because they are easily cared for. Feeding is the biggest challenge. If you are considering buying or adopting a ball python, you will need the following setup.

Ball pythons have different tank size requirements at different ages. Under 12 months, a 10-gallon tank will suffice while juveniles require a 20-gallon tank. Adults need to be given a 40-gallon enclosure, and most owners start out with a 40 gallon or bigger tank to prevent having to keep buying and upgrading.

PVC and plastic enclosures are preferred over glass because of their ability to retain humidity and because the clear surface of a glass tank can stress and worry a python.

Provide logs and thick branches, offer hide spots, and incorporate artificial foliage and a terrarium background. This will help your python feel at home and give it somewhere to hide away from prying eyes.

The humid environment of the tank means that bacteria and mold can thrive. Bake wooden décor and wash plastic décor in a diluted bleach solution to ensure they are thoroughly sanitized. As well as this regular sanitization, you will need to spot clean every day. Spot clean means finding and removing feces and other dirt.

A basking lamp should be used to simulate a 12-hour day/night cycle and it should be placed over a suitable basking spot. Ball pythons do not require a special UVB lamp.

Cypress mulch or coconut fiber are the preferred substrate materials. These will not be swallowed so won’t cause impaction, which is a painful and potentially fatal condition caused by the drying and hardening of substrates like sand.

Feeding a ball python is one of the most challenging aspects of owning this snake. Hatchlings will eat insects. They may also eat a fuzzy mouse roughly every five days. Juveniles will eat rats and sometimes mice, every week. Adults will consume a rat every 10 days.

Although you can feed chicks, occasionally, the pickiness of ball pythons means that yours may opt against mice and rats if they get a taste for chicks.

The good health and long life of your ball python require that you follow an appropriate diet and keep tank conditions ideal with the appropriate lighting, temperature, and humidity levels.

As well as common problems associated with all captive snakes, such as prolapses and cancer, the specific care requirements of a ball python mean that they can be prone to:

With good care, you can expect a ball python to live about 30 years in captivity. More common is that the snake will live approximately 25 years.

The breeding season for this species usually occurs between September and November, during the rainy season. You can try increasing the frequency of mistings to encourage mating. The gestation period is approximately 50 days and the female will form a ball around the eggs once they are laid and until they hatch.

Expect a clutch to consist of between 1 and 10 eggs. The eggs will stick together until a few days before they are due to hatch when the young snake will use their teeth to slit open the shell.

Initially, the ball python will be shy and may hide from you. It will take time and regular handling to develop trust. Although the ball python rarely bites, and when it does it is not considered a dangerous or too painful bite, you should avoid handling if your python does look ready to strike. Also, avoid handling for the first week to 10 days after you get your snake. This will allow them to settle in without becoming too stressed.

Initially, handle the snake for about 10 minutes a day. After a week, increase this to 20 minutes a day, before increasing again to half an hour per day.

Shedding: What to Expect

The pastel ball python sheds regularly as it ages and grows. Expect it to shed roughly every 4-6 weeks. As your python prepares to shed, you may notice that its eyes turn opaque. The skin should shed in one piece and you should avoid handling the snake until shedding is complete. Create a homemade humidity chamber if the skin gets stuck, and do not try soaking because this could drown the snake.

How Much Do Pastel Ball Pythons Cost?

The pastel morph has become one of the most common of all ball python morphs, thanks to its striking appearance. This means that you can get a good example of a pastel for $100 or less.

The pastel ball python is one of the most popular and common morphs. It has a brighter appearance than the standard python but is still considered a good snake for beginners because it has low to moderate care requirements, with its propensity to selective eating being its biggest drawback. Ensure you provide adequate tank space, opt for a PVC plastic tank rather than glass, and offer the right food for the stage of your snake’s life, while ensuring daily handling to build a bond between the two of you.