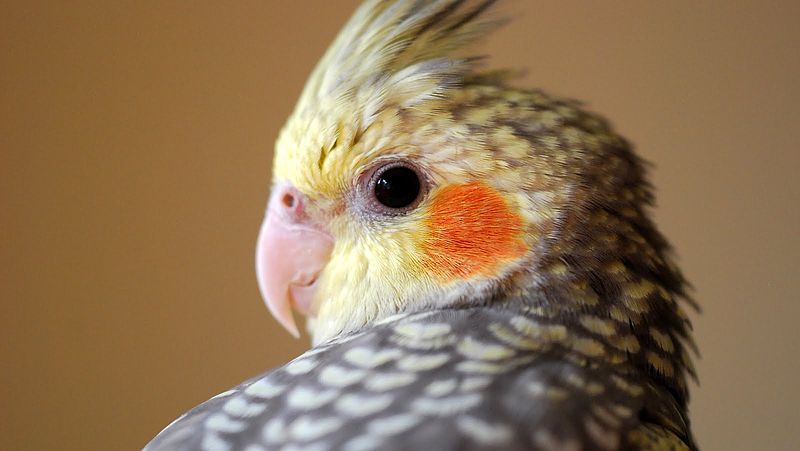 Pearl cockatiels are unique to the domesticated world of pets, having been bred from Grey cockatiels. They are a strain of the species developed by breeders and cannot be seen in the wild. Cockatiels are commonly bred to enhance specific coloring mutations, to make them even more attractive to bird owners.

The Pearl cockatiel is not that common but is becoming more so as breeders perfect the capacity to acquire the coloring in baby birds. The trait is linked to the sex of the birds, and those genes dictate their pearling. This is why most Pearl cockatiels are female. Breeders have only recently started to be able to retain pearling in males past their juvenile molt.

The cockatiel has a widely unknown history when it comes to pet ownership. They became popular in the 1900s, but not much more is known about their rise to fame in the world of pet birds.

Cockatiels are native to Australia. There, they are called quarrions and weiros. They were initially discovered for documentation by the scientific world in 1770 and are the smallest member of the cockatoo family. This bird primarily makes their home in the Outback throughout the entire northern range of the continent. Some think of them as pests.

Although all the original cockatoos kept as pets were exported from Australia, their trapping and shipment have long been banned. Now, breeders use the generations of birds bred from these original to supply pet shops and independent buyers.

Cockatiels are a common domesticated bird nowadays because of their docile personalities. As long as they are socialized and handled early enough in life, they will often have amiable characters that make it easy for them to fit into any home.

Cockatiels are smaller versions of parrots. They are not fond of cuddling, but they do get affectionate with their caretakers and will be happy to see you and be close to you.

If cockatiels are not tamed and appropriately trained, then they can form bad habits, like nipping. They do not like when people scold them, which will often cause them to be shy around people.

Cockatiels are intelligent household birds. They can learn quite a range of tricks and how to talk. They whistle and vocalize their emotions but are nowhere close to the volume of other parrots.

Males have gained quite the reputation when it comes to their capacity to learn how to mimic. They seem to pick up on it faster than females do, although females will give all mimicry a good try.

Both males and females are good at picking up sounds from around the home or phrases commonly said. You can find them repeating sounds like your ringtone, the songs from the radio, wild bird calls, or even alarm clocks.

Wild cockatiels only come in one common color variety. They have a gray body and a yellowish face with a yellow crest. They also commonly have a patch of orange on their cheek.

You can tell the difference between males and females in this species in two ways. The colors on the face of the male are much more vivid than on the female. Also, females have colored bars that run on the underside of their tail feathers.

Now that cockatiels have been such favored pets for so many years, much work has been much work to develop new color patterns in the birds. All of these are only seen as domesticated birds. The grey variety is the only cockatiel that you will see in the wild.

The pearl color pattern on the Pearl cockatiel is an example of breeders selectively breeding for a color mutation. The pearls are created from small spots of contrasting colors speckled across their feathers to give them a pearled appearance.

Other colors of a cockatiel can include:

Caring for the Pearl Cockatiel

Birds are not often solitary creatures, as they enjoy being part of a flock. However, with such a small personal area allotted to each of them in captivity, many birds can get aggressive.

When it comes to cockatiels, it is your choice whether you want to keep a single bird or a pair. As a pair, they will often get along quite well, but they are much less likely to bond well with their caretakers. They are also less likely to try to mimic sounds and noises.

If you do keep a single cockatiel, be prepared to spend significant amounts of time with them. If you don’t, they can become lonely, which frequently leads to self-harming behaviors.

Cockatiels are natural mess-makers and will need to get weekly sprays or baths to get rid of the powdery dust that they produce to coat their feathers. Clean their cages at least once a week as well.

These birds enjoy being active and are playful. Unless they have a flying cage, they should be allowed to spend time outside of their cage each day. Doing so will also discourage them from feeling like they need to escape.

When you let out your bird, keep them away from the kitchen or any drafty areas so they do not fall ill. Also, keep in mind that fumes from Teflon cookware that has been heated can kill cockatiels.

The only other primary consideration is the need to clip your birds’ wings and nails about two times each year. If you are confident that you know exactly how to do this safely, then there is no need to ask a vet or a breeder. Otherwise, avoid the chance of them bleeding to death after an improper trimming procedure and contact a professional.

Like many other originally wild birds that have now been domesticated, cockatiels frequently suffer from nutritional deficiency. They are often fed only seeds or will pick out their favorite parts of a food mix.

The vitamins and minerals found in fruits and vegetables are necessary for a healthy diet. Ensure that your cockatiel gets a well-rounded diet instead of primarily eating seeds.

Another danger that comes from eating a limited diet is fatty liver disease. If your bird eats a diet high in carbs and fats with a limited amount of exercise, ensure that you provide them with a healthy lifestyle.

Birds are sensitive to fumes from chemicals, insecticides, pesticide residue, and other scents that we might not even be able to smell. If you notice any wheezing, coughing, or nasal discharge in your cockatiel, immediately take them to an avian veterinarian. Acting fast is the best way to save your bird from a sudden onset of respiratory disease.

Variety is essential for a healthy cockatiel. Although many first-time bird owners expect to primarily feed seeds to their birds, seeds should make up no more than 30% of your bird’s diet. They are quite high in fat and can cause your bird to gain unnecessary weight.

Veterinarians often recommend pelleted diets because they are more nutritionally balanced than mixes and don’t allow birds to pick out their favorite parts. You should supplement these with snacks of vegetables and fruit.

Cockatiels typically only need about 1 tablespoon of food each day. Each part of that tablespoon matters, though. Feed them each morning to give them plenty of time to forage during the day. Put a bit of it in their food bowl and scatter the rest in other areas around the cage.

Cockatiels are not inclined to overeat. If they haven’t eaten all their food after an hour, remove it from their cage so they don’t end up soiling it.

Cockatiels need plenty of exercise to keep them from getting bored. Naturally, they are active birds that want to have plenty to do. They should have multiple levels of perches to climb to and from easily, without putting them in danger.

Getting your cockatiel a cage with horizontal bars is the best. They are likely to use these as a ladder and scale all over their cage. This gives them plenty of activity. If their enclosure doesn’t have horizontal bars, provide them with a kind of bird-safe ladder.

Giving them observed time around the house is one of the best ways to exercise them. You can even teach them games to get them to exercise with you.

Where to Adopt or Buy a Pearl Cockatiel

Pearl cockatiels are a bit more difficult to find than typical cockatiels. It is best if you try to find them from specific breeders. Doing so will also help guarantee that if you adopt a juvenile male from them when they molt and become adults, they will retain their pearled plumage.

A pearl cockatiel is a distinctive coloration born from a sex-related genetic mutation. They are now bred to encourage this plumage pattern by many breeders. They have the same personality traits and tendencies as a typical cockatiel. This means that with the right training and handling, they will become a well-adjusted and affectionate adult bird.