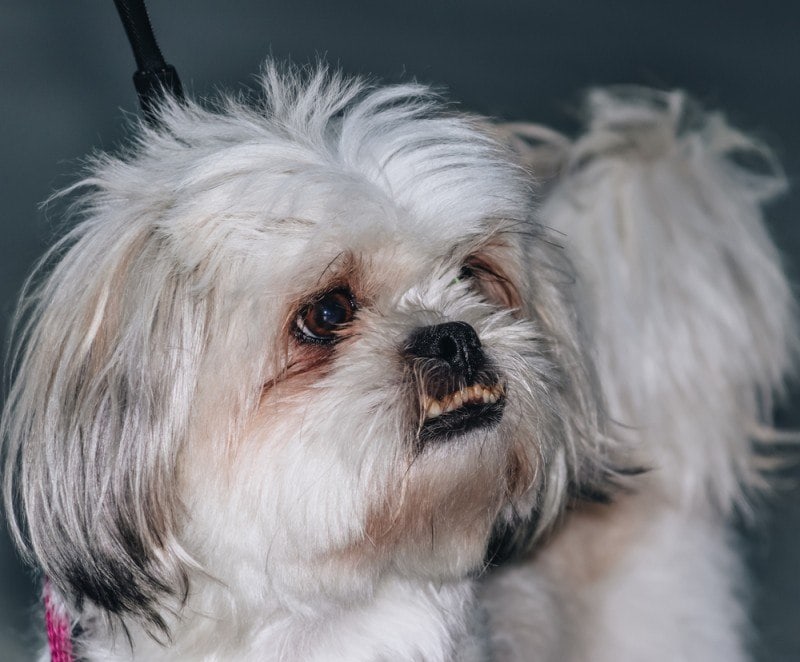 Of all the toy dog breeds, the Pekingese is undoubtedly the one that most resembles an adorable teddy bear. Besides, it looks like the Pekingese knows he is of royal descent. He has a reserved and dignified demeanor, even if at times he lets down the mask and frolic loudly. This vigilant little dog makes a good watchdog, and his bark is much more impressive than his size suggests.

If you are drawn to this breed of mini dog but would like a mix of character and physical attributes with another species, read on for the 10 most adorable Pekingese mixes that you can adopt.

The Peagle is a mix between the Beagle and the Pekingese. Since this is a crossbreed, he can inherit several traits from either of his purebred parents. Nevertheless, the Pekingese and Beagle mix is likely to be a friendly dog, as both parents are known for their affectionate nature (but also for their sometimes-incessant barking!).

Imagine the adorable mix of a white furball with the Pekingese little upturned nose! This is what you get with the cross between Pekingese and Bichon Frise: the peke-a-chon! Once again, it is difficult to predict the temperament of this crossbreed dog breed, which is why it is important to remember some characteristics of the Bichon Frise:

The Bichon Frise is a playful dog. His gentle and friendly temperament allows him to be greatly appreciated by his owners and their children. He is very social with people and other animals, although his love of cats is not unconditional. He is also very energetic: lack of physical activity will cause him to lose his mind quickly. It is also necessary to devote a lot of time to it because the Bichon Frize hardly tolerates loneliness. His barking could become a problem for the neighborhood if you are not careful.

Keep in mind that the Peke-a-chon is at risk of inheriting some health problems associated with the short muzzle type (called brachycephalic) of the Pekinese.

Bostineses make unique tiny pets; they are affectionate, loyal, bright, and playful. Also, this mix requires moderate activity but needs a lot of attention from their owners. Besides, the appearance of Bostineses varies greatly; they can be large like a Boston Terrier or smaller and elongated like a Pekingese. Overall, they usually have many of the facial features of Pekingese but have not entirely stabilized in their appearance or personality.

Intelligent, lively, and robust, the Griffon is a small dog with a compact structure. This mix between Pekingese and Brussels Griffon also has a good character. However, it is better suited to a master who knows how to assert himself. He is also a dog who does not get along with children, as he has little patience with their awkward movements. Very attached to his master and affectionate, the Griffonese is an excellent pet, especially since he is not aggressive. In addition, due to its origins, the Griffonese is wary of strangers, so it tends to be a good watchdog, always on the alert.

They are intelligent and able to learn fast but can also be stubborn and sensitive, so make sure you have patience and use positive reinforcement rather than physical punishment.

Bred as lovely companion dogs, these tiny guys don’t need a lot of exercises and prefer to spend all their time by your side. Intelligent and affectionate, the cross between Pekingese and Chihuahua (Cheek) is also a good watchdog. Additionally, due to their small size and limited need for exercise, Cheeks are good apartment living dogs. However, make sure you provide them with a good education, as these dogs tend to be bossy and very stubborn.

Regarding the cross between Pekingese and Chow-chow (Peke-A-Chow), consider that the particular character of the chow-chow can significantly influence the result of the mixture. In fact, the temperament of the chow-chow is more like that of a feline than that of a dog! Very independent, the Chow-chow is proud and reserved and can appear cold and distant. On the other hand, he adores his owner and loves the other family members, but he rarely shows signs of affection.

Therefore, the Peke-A-Chow is not suitable for little toddlers because it is not playful and does not like to be handled like a teddy bear. This behavior reflects his vocation as a guard dog and herding dog. Thus, the Chow-chow is a good guardian because it instinctively protects its territory, family, and home.

Not very sociable and dominant, he can be suspicious of strangers and aggressive with other dogs. Socialization at a young age is therefore essential to attenuate this temperament. The training of this particular breed can be complex and should be carried out firmly and from an early age. He needs a calm owner who will be patient and very gentle to create a real bond with him.

Described as happy little clowns, French Bullnese dogs are sure to make you smile! This hybrid is a mix between the French Bulldog and the Pekingese. He has a muscular body with a coat of different colors that is thick, soft, and short, allowing for an easy grooming routine. This adorable mix will bring joy to the whole family due to its friendly temperament and cheerful nature. The French Bullnese was indeed bred for its easy-going character and immense need for cuddles. In addition, it is ideally suited for apartment living, as it does not require a lot of exercises to stay healthy and happy.

Since Pekingese and Pomeranians are roughly the same sizes, you can expect a Peek-A-Pom to be a small dog of seven to twelve pounds. In general, he has an abundant coat and a beautiful little face. Regarding their appearance, the temperament of a Pomeranian and Pekingese dog mix can vary. Nevertheless, based on similar characteristics shared by both parents, you can be sure your Peek-A-Pom will have a strong temper. You can expect an energetic, fiery, and stubborn puppy. He will also tend to be friendly and independent, just like the Pekingese. This strong-willed dog is described as loyal, proud, independent, dignified, and daring.

Above all, don’t be fooled by their small size. The Peek-A-Pom always shows a “big dog” attitude, which could also be called… the Napoleon syndrome!

A Peekapoo is a mix between a Pekingese and a Toy Poodle. As a designer dog, the character and appearance of the Peekapoo are hard to predict. You hope they get the best traits of their Poodle and Pekingese parents, but that’s not always the case. They were bred to combine the intelligence and hypoallergenic coat of the Poodle with the friendly and loving nature of the Pekingese. It is a breed that doesn’t require much grooming, and that does well in many types of households. They are also clingy creatures that always want to be close to their owners.

Plus, don’t be fooled by their size! These dogs can easily follow you on hikes and jogs.

The Shinese is a mix between the Pekingese and the Shih Tzu Mix. These two parent breeds have royal origins in China. They are also classified as a toy breed, which means that they are versatile enough to accommodate almost any lifestyle.

These cute puppies are very attached to their owners. They are adorable, smart, lively, and need to spend a lot of time with you. So, when you adopt a Shinese, be prepared for a dog who wants to be treated like a king. They need a lot of attention but are often spoiled and stubborn.

Plus, these adorable little puppies have luxurious long fur that begs to be petted and cuddled.

Their sweet, darling face can win anyone’s heart. However, you will need to be gentle and patient with these sensitive little puppies – their spoiled child behavior can be frustrating at times, but they will be really hurt if you pick on them too abruptly.

The possible crosses between Pekingese and other breeds of mini dogs do not stop at this list; indeed, there are more than 70 crossbreeding possibilities! On the other hand, we’ve taken care to bring you the cutest, most adorable specimens with fewer breed-specific health issues. However, if you decide to adopt one of these magnificent puppies, be sure to contact a specialist breeder first, who will be able to guide and advise you appropriately.