Mink as a Pet: 11 Things You Should Know Before Getting One 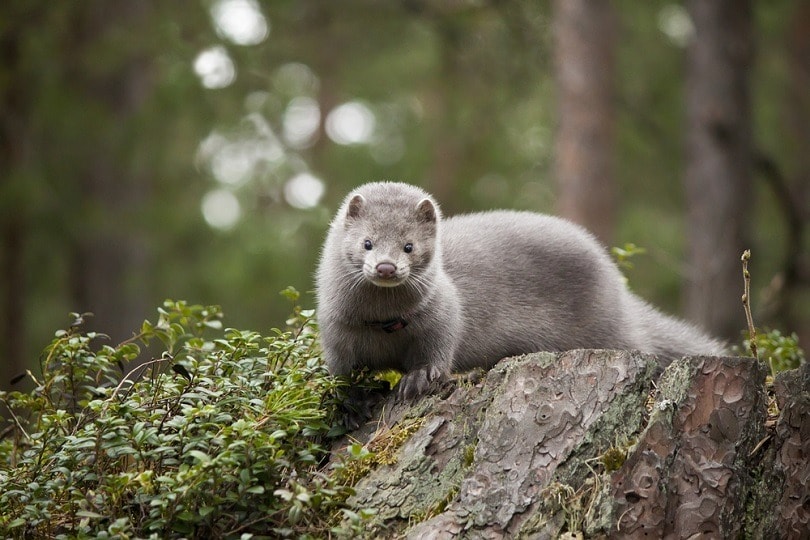 The European and the American mink are two species of the weasel family that live in the Northern Hemisphere. They are prized for their luxurious fur, which attracts a high cost and is a primary reason for the mink being farmed and killed. In the wild, they live up to 10 years, and there are significant differences between the American and the European species.

Their similarity to ferrets means that many people keep or have tried to keep minks as pets, but before you consider trying to domesticate one or buying one that has been bred as a domesticated pet, there are a few things that you need to know about the mink.

The mink is a semiaquatic creature. They hunt most of their food by the water’s edge and live by the side of lakes or rivers, so they have the physical characteristics to aid in this watery way of life. The mink has webbed feet that aid them in gliding through the water without expending masses of energy.

They also have a water-repellent coat. The mink can swim distances up to 50 feet, and they are rarely found more than 100 feet away from water.

Webbed feet mean that the animal has a layer of skin or membrane between their toes. The web gives them more resistance so the animal’s feet can push more water behind them. This increases the speed at which the mink moves through the water, while reducing the amount of effort that they take to do so.

There are two distinct species of mink: the American and the European mink. Although they are similar in most respects, the biggest difference between the two is size.

American minks weigh up to 1.6kg and measure as long as 70cm, while the European variant weighs just 700g and measures 38cm in length. The American mink is nearly twice the size of their European counterpart.

Minks are carnivores. This means that they eat meat. They will hunt in the water for fish and for animals like frogs and salamanders. They will occasionally hunt outside the water and kill mice, voles, and certain aquatic birds and their young. They may even kill hares and rabbits, although this is rare.

5. Their Babies Are Called Kits

A baby mink is called a kit. They are born naked and completely blind, and they will remain in the nest until they are fully weaned. Two months after their birth, a baby mink will learn to hunt, and by next fall, they will set off to find their own territory.

European minks have a gestation period of up to 72 days and American minks up to 75. Both species will give birth to between one and eight kits. While the American mink may become independent in just 6 weeks, the European will stay with their mother until 3 months of age, possibly 4.

6. Minks Rarely Dig Their Own Dens

The mink lives in a home called a den, and while they are capable of digging their own dens, they will usually adopt the homes of other animals to call their own. They add materials like grass and fur to make the den more comfortable.

7. The European Mink Is Critically Endangered

The European mink is listed as being critically endangered, which means that half of the population of this small mammal has been lost in the past 10 years and it is believed that 80% of the population will be gone within another decade.

The American mink is not considered under threat at all.

8. Their Coats Are Water Repellant

The mink’s coat is another reason that the animal is so highly skilled in the water. It is coated in a special protective oil that repels water. This prevents the mink from getting waterlogged, makes it easier for them to swim at high speeds, and makes the transition from water to land easier and more comfortable.

Mink fur is considered very valuable and it is used around the world. The cost of the pelt is one of the reasons that minks are farmed. Although mink farmers in most countries adhere to strict rules governing the welfare and killing of the animals, many groups still protest against the farming of minks for fur.

Protestors point to inhumane methods used by some farmers and say that the minks are raised solely for their fur, which they consider to be a vanity item.

If you are considering keeping a mink as a pet, do know that they have several defenses if they are startled. They will hiss and growl, and they can even let off a smell that is similar to that of a skunk.

They also use this scent as a method of marking territory, so if you have two or more minks, it can lead to a very unpleasant smell in the home.

11. Minks Can Be Vicious

The mink may also attack if they feel threatened, and they have sharp teeth and effective claws that can cause more than a little damage to people.

The ferocity of a mink is such that they are considered an exotic pet in some states, which means that the keeping of this animal is restricted.

Mink as a Pet

A mink is a wild animal that has not been domesticated, although they are farmed and kept for their valuable fur. The mink can be aggressive, they let off a smell similar to that of a skunk, and they require water and aquatic prey to be happy. Think twice before keeping one as a pet, especially since they are classified as exotic animals in some states.