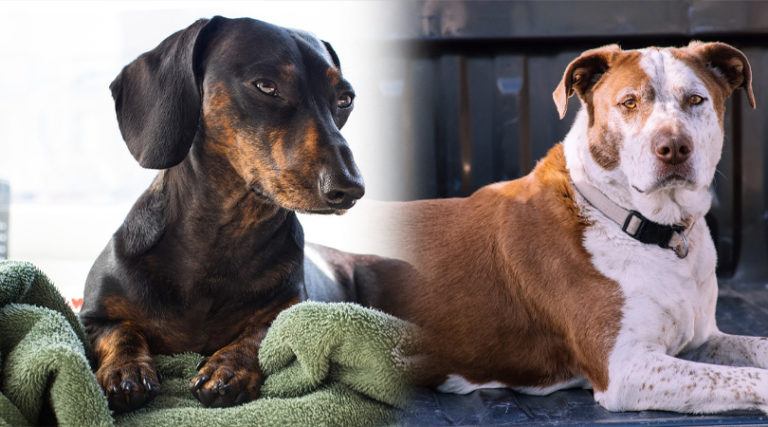 The Pitbull Dachshund Mix is a medium mixed breed dog the result of a cross between the Pit Bull and the Dachshund. Other names she may be called are Pitwee, Dox-Bull, Bull-Dach, Doxiebull, Doxbull, and Bulldach. She has a life span of 8 to 12 years and is feisty and spirited dog who is also quite clever.

If you do find a Pitbull Dachshund Mix she will need you to take her training and socialization seriously and to give her enough exercise and stimulation. She is a feisty dog who will be a lot of fun to have and will be very devoted to you.

Where does the Pitbull Dachshund Mix come from?

The Pitbull Dachshund Mix is a very rare mixed breed and it is not know at this time whether there are breeders deliberately creating this dog. It came to light in 2015 when Rami, a Pitbull Dachshund Mix was found by a man in his yard in GA, North America. It is presumed he was an accidental offspring. He was very quickly trending online and when the Humane Society used social media to find him a home they got over 2 million hits! He certainly has a one of a kind look that draws a lot of attention but there do not seem to be many breeders actually creating this new designer dog so there are not many out there. Here is a look at the two purebreds who are his parents to get an idea of where he comes from and what might go into him.

The American Pit Bull Terrier originally starts back in England where terrier and bull breeds were created for spectator blood sports like pit fighting and bull baiting. However once over here they were used more as farm dogs where they acted as guard dogs, helped hunt and acted as companions. They were bred to be larger than they had been too. The AKC named them American Staffordshire Terriers in the 1930s to try and move away from the history of fighting and now today there are two types with slight differences in looks and character, the American Staffordshire Terriers are for dog shows and the American Pit Bull Terriers are not. In terms of personality they love people and will try to be a lap dog despite their size! They are courageous still but gentle.

The Dachshund is a German bred dog where he was used to hunt badgers and other den animals like foxes. In packs he also would hunt larger animals like deer or even wild boar. He comes from around the 15th century and back then he varied in size depending on his purpose. Over many years he was altered looking to create a dog who was fearless and elongated so he could dig into burrows. In his mix were dogs like terriers, spaniels and hounds. During the 1800s he also started to be bred to be a companion not just a hunter, particularly in England. At the end of the 19th century he arrived in America.

The Bulldach is an affectionate dog who loves to cuddle when they are not being feisty and lively! She is intelligent but can be stubborn. She loves to play so gets on well with children but is better with older ones. She is not a violent dog but she is protective and if she is provoked or she deems a real threat is imminent she will act. She is a good family dog but does not react well to be teased or hounded as she can have a short temper. Coming from a good line and with training and early socialization she can be a gentle, loving and entertaining pet.

She is a medium sized dog weighing up to 25 pounds when fully grown. She has a head like a Pit Bull but the body of a Dachshund which is why Rami got so many views! Her ears are long and she has a sausage shaped but muscular body. Her coat is usually short and coarse and colors are brindle, brown or black. Some also have a patch that is white on their chest.

How active does the Pitbull Dachshund Mix need to be?

She is very playful and fairly active. She has a lot of stamina and can go for at least one long walk each day. Along with that she would need play time, either inside or out. Keep in mind she is a great jumper so a yard needs to be properly fenced. She should also be given toys and activities that challenge her mentally too. She loves to run and may not like being on a leash but she is very quick so do not let her off unless she is in a contained area. She would loves trips to a dog park too and can adapt to apartment living as long as she gets outside, but a yard is really quite nice to have for her.

She is intelligent but likes to get her own way and can be stubborn about it. Early socialization and training are important for this dog so do not skip it. Be positive but stay firm and consistent. Use praise and rewards to encourage her and stay patient if she is stubborn about something. While she will not train quicker than other dogs with the right approach she should get there at an average pace.

Living with a Pitbull Dachshund Mix

The Bulldach is fairly easy to take care of, she does shed an average amount so will need vacuuming up after and brushing regularly to keep on top of the loose hair. Every couple of days should be enough though you can do it daily if she enjoys it. Bathing will need to happen just when she gets herself quite dirty and be sure to use a dog shampoo. Because of her shape and size she may need help getting in and out of the bath. She will need her ears checked and cleaned once a week. There are dog ear cleaning solutions that can be used. Her nails will also need a trim regularly to stop them getting too long.

With early socialization and if she has grown with the children she gets on well with them. However she is less good with young children so should not be left alone with them. Younger children tend to mishandle her and could potential hurt her or cause her to snap so supervision is a good idea. She also tends to have a hyper personality which is not a good match with smaller children. The socialization helps her get on with other dogs too and to not always see smaller animals as prey.

She will need 1 to 2 cups of high quality dry dog food fed to her each day. It should not be fed in one sitting though, give it to her in two or three meals spread throughout the day. She is an occasional barker and will alert you to an intruder. She is better in warmer climates than cold ones.

Potential health issues she could develop are from her parents. They include Hypothyroidism, heart disease, IVDD, Epilepsy, eye problems, bloat, Cushings, diabetes, deafness, hip dysplasia and allergies. If you ask a breeder to see parental health clearances you can possibly avoid these problems. You should also always visit a puppy before you buy to see the conditions it was kept in.

This is a very new dog and very rare. As of writing this article no puppies for sale could be found to gauge a price range for you. Other costs though are the same as with other dogs her size. She will need a crate, a carrier, collar and leash and other miscellaneous items. She should also be micro chipped, spayed, have blood tests done, given shots and dewormed. These costs come to $460 to $500. Annual costs come in non-medical and medical form. Things like toys, treats, vaccinations, flea prevention, pet insurance, food, check ups at the vet, a license and training. These could come to between $815 to $1025.

Looking for a Pitbull Dachshund Mix Puppy Name? Let select one from our list!