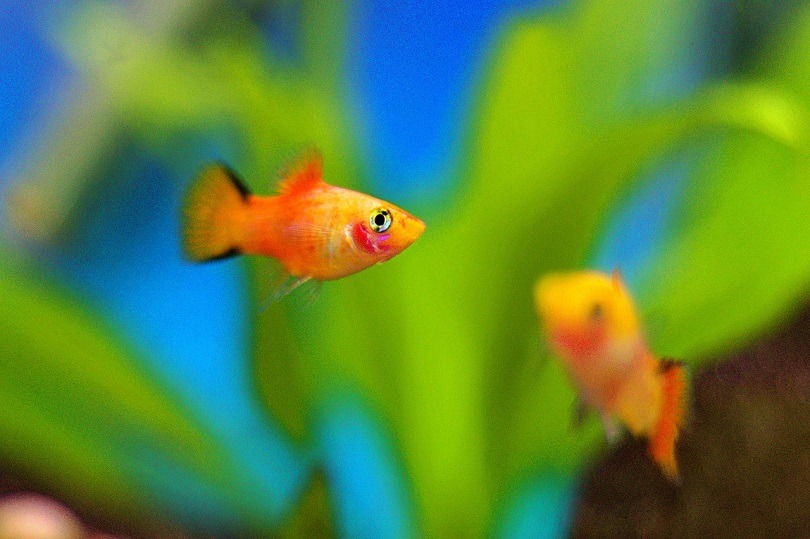 Platy fish are some of the most popular members of aquariums around the globe. Aquarists are attracted to these fish for a variety of reasons, including their incredibly vibrant and diverse colorations and patterns. They’re also very easy to breed, compatible with many other fish, and known for their robust nature that makes them easy to care for and keep alive.

Today, thanks to selective breeding efforts, Platies are becoming more colorful than ever before. New colors and patterns are popping up all the time, helping to make these fish even more popular. Let’s take a look at 20 of the wild and interesting variations of Platies that are available.

You can find Platies in a wide range of colors. They have several main base colors and they can appear in many shades of each of these colors. Moreover, they can display several or all of these colors at once.

Black Platies are mainly black. Sometimes, though rarely, they’re all black. More often, they’ll have other colors strewn in.

Blue is a somewhat common color for a Platy. You’ll often find it mixed with other colors in various patterns.

Less of a brown and more of a bronze, these Platies seem to shine with a bit of a metallic essence.

The green color of these Platies helps them blend in well with aquatic plant life. They’re not often solid green. You’ll usually find the green mixed with other colors.

You might also hear red Platies referred to as velvet red, brick red, coral red, or blood red, but they’re all essentially the same thing.

The diversity of Platy fish stretches beyond mere coloration. They also come in a variety of different patterns.

Black Hamburg Platies are black from their tails to their heads. But their heads are red or gold, as well as the bottom fins.

This pattern is also known as twin bar. In this coloration, the fish’s tailfin has black edges on the top and bottom, highlighting it and causing it to be more eye-catching than normal.

As you might guess, dalmatian Platies are spotted. They usually have a bright main color with darker spots all over and can come with a mixture of other colors and patterns as well.

These fish are named for the black pattern that resembles the iconic character’s head at the base of the fish’s tail. This pattern can be mixed with others to create colorful fish of red, blue, and more, all with a Mickey Mouse head stamped on their bodies.

Like Panda bears, Panda Platy fish display bodies that are bright and lightly colored contrasted by a black tail.

Parrot Platies feature a distinct pattern on their tails with two black stripes on the edges that form a V. You’ll find these in several colors; most commonly gold, yellow, and red.

Pineapple Platies are a new and pretty rare variation. They feature fiery red and orange colors that appear almost iridescent.

Rainbow Platies display a range of different colors. Often, they start with a black tail and the colors get lighter and lighter as they reach the front of the fish.

This is a specific variation of the variegated pattern where spots are sprinkled across the fish’s body rather than blotches.

These fish have random dark blotches that can be any size or shape. The blotches are so dark they’re nearly black and will appear all over the fish’s body. You might also hear these fish called painted Platies.

Wagtail Platies have fins that are black with a body of any other color or pattern. The only requisite is that their dorsal and tail fins are black. Most often, the body color will be red or gold, though you’ll also find them in many other shades.

This is the more common of the two fin variations you’ll find in Platy fish. With a hifin variation, the dorsal fin is longer than usual. But these elongated fins are unfortunately more susceptible to disease if the fish is living in poor water conditions or if it becomes stressed.

Pintails have a tail that stretches out to a pin-like point in the center. Often, they’re mistaken for swordtails, but these are different species entirely.

No matter your personal preferences, there’s almost guaranteed to be a Platy that fits them. These fish are available in so many colors and patterns that they can really help to liven up any aquarium. You can always mix a few of these unique fish together and even try your hand at breeding them to see what interesting fish result!