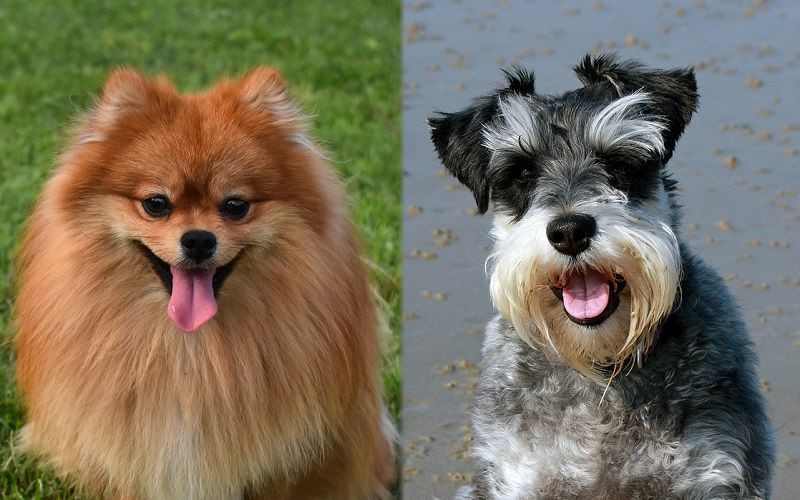 The Pom-A-Nauze is a small cross of the Pomeranian and the Miniature Schnauzer. He is also called Scheranian, Pomanauzer and Schnauzeranian. He has a life span of 12 to 16 years and has talents in watchdog and tricks. He is a devoted dog and is quite sensitive too.

The Pom-A-Nauze could be a great dog but he will need an owner fully aware of the importance of basic training and socialization. He is very affectionate and devoted so he is well worth the effort. He could be a good family dog or a great companion to anyone able to give him that and can meet his physical and mental needs.

Where does the Pom-A-Nauze come from?

The Pom-A-Nauze is deliberately bred mixed dog also called a designer dog. This term is used to cover all the recent first generation mixed dogs that have become popular over the last 10 years. The original thought behind the first designer dogs, began 40 to 50 years ago was to combine hypoallergenic qualities of one breed with temperaments or looks of another. Some breeders today still put thought in their mixes but a lot are now just churning out mixed dogs to make money. Take care and do your research before you buy a designer dog today, there are a lot of puppy mills and bad breeders to avoid. Also keep in mind there are no guarantees with first generation puppies, they can be any kind of mix of genes from either parent, the same litter can produce dogs that have differences in looks and in personalities. Here is a look at the parents to get a feel for his background.

This dog was bred to be a ratter on farms and to be a guard dog. He was bred in the mid to late 1800s in Germany by crossing the Standard Schnauzer with other smaller breeds. In Europe during the World Wars dog breeding was hard and some breeds nearly disappeared but the Miniature Schnauzer remained popular. In those days you could get them in a variety of colors but today not so much!

Today he is a lively dog who loves to be in the middle of family goings ons and is quite the extrovert. He loves to receive affection and attention and is affectionate in return. He is feisty and confident and his need to be around people will likely mean he will follow you around. He will love to snuggle into your lap and he will try to make you do what he wants to get his own way. He is intelligent but can be stubborn

This dog was developed to be a companion and gets his name from the province he comes from, Pomerania. When first bred he was bigger, he was always popular and many well known people through the ages can be linked to him, such as Newton, Michelangelo, Martin Luther and Mozart. In the 18th century the dog came to England with a Princess from a region neighboring Pomerania. The breed became popular amongst the rich and Queen Victoria also became fond of the smaller ones. As a result English dog breeders began to breed Poms smaller and with more color. In the 1880s he went to the US.

Today he is a very outgoing, social and clever dog. He loves meeting people, he tends to be too bold and can get into trouble, and he gets on well with other pets. He is quite curious and lively and being alert he is a good watchdog. His barking can be a problem so training will be important.

The Pom-A-Nauze is very loyal and devoted to his owners but needs a lot of socialization to help him get along with people or animals that he has not grown up with. He is affectionate and makes a great companion. He is smart and active so will need physical and mental stimulation or he can be hard to control and will act out. He is eager to learn and alert too. To keep him well balanced he needs a strong owner who is clearly the pack leader. He is quite sensitive but when it comes to being left alone it really depends on which parent he is more like. Miniature Schnauzer do not mind it but Pomeranian do not like it at all.

This is a small dog weighing 15 to 20 pounds and standing 10 to 14 inches tall. His coat can be like either parent but tends to be straight and wiry. Common colors are brown, golden, cream, white and sable. It has ears that stand up erect and its tail can be docked in the countries that still allow that, or left natural in countries that now ban it.

How active does the Pom-A-Nauze need to be?

He is a fairly active dog but being small that does not amount to a lot though he will need an owner able to be somewhat active themselves. A couple of long walks, play indoors or the yard if there is one. He can adapt to apartment living with his size as long as you get him out at least twice a day. Going to a dog park is a great chance to get off leash and run around but given he is not great with other dogs make sure you have done some socialization.

The Pom-A-Nauze is a smart guy and training should be easy and successful and quicker than many dogs as he needs less repetition. He listens to commands and responds well being eager to please. Being sensitive he responds poorly to harshness and scolding. Use positive techniques, have a firm and consistent approach and use treats, rewards and praise to encourage him. As well as carrying out at least basic training and house training you must start socializing him as early as possible. It will make it easier for him and for you when people come over, if you want more pets or children and when you go out walking or to a dog park.

There is a lot to moderate amount of grooming to do with this dog. He sheds a low to moderate amount but he is not hypoallergenic so is not good if you have someone allergic in the home. Brush his coat two to three times a week to keep his coat looking healthy and free of tangles. His coat is easy to groom and you can opt to use dry shampoo in between bath times to keep it clean. Give him a bath then just when he is really needing one using only a dog shampoo.

As mentioned he really needs good socialization to ensure he gets on okay with other children, dogs and animals. He is better with ones he has been raised with but can be difficult around strange ones without the socialization. It is best to supervise him around visiting children, keep him leashed when going for walks in case he feels a need to chase something and make sure you can control him when at dog parks.

He is alert and should make a good watchdog. He does bark occasionally to frequently though so that might affect how good he is as an apartment dog. It can vary from one Pom-A-Nauze to another. He will need to be fed ¾ to 1 1/2 cups of good quality dry dog food daily, split into two meals.

Costs involved in owning a Pom-A-Nauze

How much a Pom-A-Nauze can cost depends on where you buy it from. A range of prices was not available at the time of writing this article though since it is a new and not often found designer dog. Other initial costs will include some medical requirements and some basic equipment needed. He should have blood tests, a physical, be dewormed, have his shots, be micro chipped and neutered. This will cost about $300. You will need at least a crate, carrier, bowls, leash and collar and that will be another $200. Annual non-medical basics like grooming, license, training, food, treats and toys come to $675 to $775. Basic medical requirements like vaccinations, tick and flea prevention, check ups and pet insurance come to $460 to $560.

Looking for a Pom-A-Nauze Puppy Name? Let select one from our list!