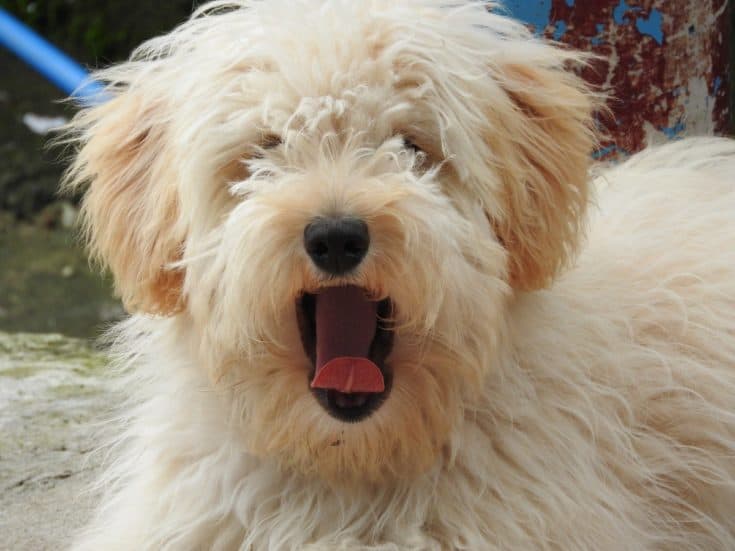 The Poo-ton is a mixed breed the result of breeding a Coton de Tulear with a Poodle, toy or miniature sized. This article will focus on the toy version which has a life span of 12 to 16 years. He is a small dog with talents in watchdog, agility and tricks. He is also known as a Doodle-Ton, a Cotondoodle and a Cotonpoo. He is a playful and entertaining dog often acting clownish and being friendly.

Where does the Poo-ton come from?

The Poo-ton is part of a group of dogs called Designer dogs. These are deliberately bred mixed breeds mostly created some time since the 1990s using a two purebreds. Many are first generation results though not all, some are created with genuine reason or thought and care. A lot of designer dogs though are generated just to make money. There are a lot of puppy pills and irresponsible breeders who see the trend and how popular designer dogs are right now and they use that to make dogs to make money. They don’t care about breeding practices, their animals or anything but that profit. Be careful who you buy from should you decide this or any other designer dog is for you. Since we do not have origins or know anything about the Poo-ton’s beginnings we can determine something about this breed by looking at the parents. Keep in mind always that you can get any characteristic from the parents in designers dogs, good, bad and anything in between!

The Island of Madagascar has several unique animals on it and one of them is actually a dog, the Coton de Tulear. It is thought his ancestor ended up there several hundred years ago either from shipwrecks, when they accompanied ladies on long voyages or when used as a ratter on board. However they got there they became popular amongst the Madagascar wealthy families. In the 1970s a Frenchman brought some home with him to get an established breed. They came to America sometime in the 1970s also.

He can still be found on the island but he is also a popular dog elsewhere too. He has a sweet nature, is playful and intelligent and quite affectionate. He is not yappy but does make noises when he plays. He loves meeting people and has a curious nature. He is easy to train and loves to play, run and swim. He does not do well when separated from his owners, can be boisterous and he is not good as a watchdog.

The Poodle was bred to be a retriever of waterfowl originally in Germany. Over the years when he made it to France he was bred and refined further into the Poodle we are more familiar with now. There are and have been for hundreds of years three sizes. Standard used for waterfowl hunting, Miniature used for sniffing out truffles and Toy used as companions and often carried around in the sleeves of the French nobility. The circuses and traveling performers of the time also took a liking to the Poodle. He was easy to train because of his intelligence and learned tricks and routines quickly. They would sculpt his coat to make him look more interesting and the wealthy spectators saw this and copied it. In England he was first registered in 1874 and in the US in 1886.

Today he is a very popular dog because of his intelligence, affectionate nature, ability to entertain and how friendly he is. He is a very loyal dog, and his aloofness is more a wariness of strangers. He loves to play and is eager to please. He is protective of his home and his family and makes a good watchdog.

The Poo-ton is an energetic, playful dog who makes a great family pet. He can be clownish as he loves to entertain and be the center of attention. He is very social and friendly and loves it when there are people around. He is not a loud dog and he is loving to his family. He is smart too and eager to please so usually easy to train. He gets on well with children and other pets, is affectionate and adaptable.

He is a small dog weighing 8 to 15 pounds and measuring 9 to 12 inches tall. He has flappy ears, short tails, a compact body, round head, short often black muzzle and eyes that are well set. He often looks much like the Coton de Tulear. His coat is medium to long and is light rather than wiry. It can be wavy to curly. Colors can include apricot, lemon, white, black, gray, brown and sable.

How active does the Poo-ton need to be?

He is a fairly active and while he is fine living in an apartment he will need daily exercise to stay healthy and happy and well behaved. He would love trips to a dog park, play time such as fetch, a couple of daily walks. Access to a yard is a bonus for him to play in but not a requirement as long as he gets enough activity elsewhere. Remember as a smart dog he also needs some mental stimulation too.

He is easy to train as he listens to commands well, needs less repetition and is eager to please and smart. Early training and socialization are important to ensure you get a well rounded dog. As with a lot of small dogs house training is not always as easy though. Some will house train just fine, but some are more difficult. Be firm, consistent and patient. If you need help consult a professional. Make sure your dog knows you are the pack leader otherwise he can become more difficult if he thinks he is the boss.

Living with a Poo-ton

He does not shed hardly at all, and can be hypoallergenic so is good for most people with allergies though it is always a good idea to visit a dog to test your reaction to it. His coat tends to be long and light so can tangle easily. Daily brushing can help control this and he will need occasional clipping at a groomers. When it comes to bath time only do so when he really needs one to avoid over washing and damaging his natural oils. Always just use a dog shampoo. You can have staining on their face and ears so wiping them clean daily is a good idea. He will need his teeth brushed at least twice a week and his nails clipped should they get too long. Clipping could be done at the groomers also since dog nails are more complicated than our own. If your dog is a show dog then grooming is lot more demanding.

He is very good with children but early socialization and training helps ensure his play does not get too rough. It also helps when they have been raised together. He also tends to get along well with other pets and dogs. Be sure to include training for the kids too! What is okay and what is not in terms of play, handling the dog and so on.

He is a good watchdog, apart from barking to alert of an intruder his barking is rare. He will need good quality dry dog food. ½ to 1 cup a day divided into two meals is a good idea. He is tolerant to most climates too.

When choosing to buy a designer dog you must explore your options and take your time to find honest breeders. You should expect to see health clearances for the puppy and the parents in order to improve your odds for your puppy’s health. A Poo-ton has the risk of developing health issues either parents is also at risk of. This includes Patellar luxation, eye problems, Addison’s, bloat, Cushings, Epilepsy, hypothyroidism, Legg-Perthes, Von Willebrand’s, Hip dysplasia and skin problems.

Costs involved in owning a Poo-ton

A Poo-ton puppy with cost between $300 to $1200. Sometimes that price will include things like deworming, check ups, starting shots and so on, and sometimes it does not. You will therefore have other initial costs for things like neutering, chipping, deworming, shots, a crate, carrier, bowls, collar and leash. These costs come to between $360 to $400. There are ongoing costs too, other than emergencies or illnesses there are basic medical costs for things like flea prevention, vaccinations, check ups and saving for pet insurance. These costs each year can range between $435 to $550. Then there are ongoing costs for other basics that are not medical in nature such as a license, training, food, toys, long hair grooming and treats. These come to between $530 to $650 a year.

Looking for a Poo-ton Puppy Name? Let select one from our list!

The Poo-ton is a great small dog. He is not too fragile, he can be hypoallergenic and is low shedding so less clean up after him. Training should go fairly smoothly usually you just need to keep at it with house breaking. He will make you laugh with his antics and give you all the companionship and love you could want!