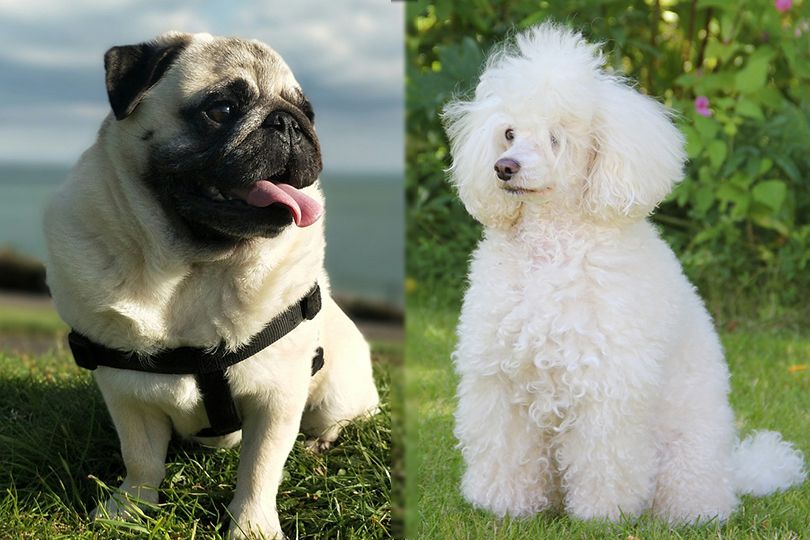 The Pugapoo is a small to medium sized mixed dog the result of crossing a Pug with a Poodle. She is also known as a Pug-A-Poo, Pugpoo, Pugdoodle, Pugoodle and Pugadoodle. She takes part in various activities such as obedience, agility and jogging and has a life span of 12 to 14 years. She is a very enthusiastic and eager to please dog great for families or anyone really who can give her lots of attention.

The Pugapoo is a dog suitable for families with older children, seniors, singles, apartment living (as long noise rules allow for her) and she is a great companion to have. She is an absolute character to have around, can be suitable for people with allergies and will adore you as much as you adore her.

Where does the Pugapoo come from?

The Pugapoo is a designer dog, a group of dogs most of which are recent creations and are the result of breeding two purebreds together deliberately. A lot of designer dogs have blended names from the parents and some were created with thought and purpose while many are just money making creations by puppy pills and bad breeders jumping on the trend. People assume that a cross breed has the best of both dogs in them and are healthy. This is not always the case though, genetics can combine in many ways that cannot be controlled. Your Pugapoo could be the best of both and be all this article suggests. But it could have the worst of both too. There is also no way to guarantee things like hypoallergenic or looks. Always visit a dog before buying. Here is a look at the parents of the Pugapoo to get a feel of where she comes from.

The Poodle is very old breed first bred to hunt waterfowl. While his origins are believed to be German it was in France where he became something far more distinct. Three sizes of Poodle were bred, the Standard, the Miniature and the Toy. The first two sizes remained useful as working dogs as well as companions but the Toy was solely a companion dog popular with the French aristocracy. He came to England in the mid 19th century and to America in the late 19th century. The clipping elaborate styles and dying was adopted when the French saw the Gypsy do the same for the circus.

Today he is a very clever breed with a long memory and an eagerness to please that makes training quite a breeze. He is also loyal and while he may appear to be dignified he is happy to clown around too. He loves people and is very affectionate and protective.

Pugs are a very old breed coming from China and can be found as far back as 206 BC. Emperors of China prized them and they were given every luxury and pampered completely. When trading with Europe began in the late 16th century Pugs came over with Dutch traders. They became favored throughout Europe in many royal and noble families. He was known by different names in different countries, the Carlin in France, the Caganlino in Italy and the Mop in Germany. His popularity continued into the Victorian era and were brought to American after the Civil War. While they were popular initially they fell out of favor for a while. The Pug’s purpose was never to be a hunter, retriever or a ratter even, he was bred for one purpose, to be a companion.

That is what he still is today. He will happily be a lap dog all day and expects your devotion for which in return he will be devoted to you also. He can still be playful but is a far calmer dog than many!

The Pugapoo is a very enthusiastic dog, happy when people come over, happy when it is time for play, going outside and so on. Her eagerness to please and enthusiasm for everything makes her fun and a joy to have and it helps out in the training department too! She is so easy to love, friendly, clownish, playful and good with children too. Despite her enthusiasm she is not overly excitable but does have some energy. She does bark a lot though so will need socialization and training. She soaks up all the attention and affection she can get. Because she relies so much on human companionship she can get separation anxiety when left alone for long periods. She can have a stubborn streak on occasion.

She is a small to medium dog weighing 10 to 30 pounds and standing 8 to 15 inches tall. Otherwise Pugapoos are not very consistent when it comes to their appearance. Some coats are curly, some are short and Pug like, some are somewhere in between. Colors can be almost any though most common ones are cream, gray, black, brown, white and golden. In general they have a squarish build, almond shape dark eyes, a dark nose and a round shaped head. Her muzzle is medium sized and her tail can either be corkscrewed or not!

How active does the Pugapoo need to be?

She is not a very active dog but she does have some energy so moderate amounts of activity both mental and physical are needed. If she is not given a chance to play and get outside she can become poorly behaved and unhappy and unhealthy. A walk or two a day plus play time is plenty. She would also enjoy occasional treats like visits to a dog park. If she does not have access to a yard she can play inside and still be happy.

She is intelligent and she is often eager to please and those things help with any kind of training. But if she has more Pug in her she can also be stubborn. Be firm, consistent and keep it positive. She is sensitive so harsh methods, scolding, punishments and getting impatient are all going to slow down or halt the process. Early socialization and training are important for every dog, no matter the size or breed. It improves how she interacts with children, other animals, other dogs and deals with different situations and locations. It also improves her general behavior and temperament. The Pugapoo is moderately easy to train so she is not slower than other dogs but she is not especially quick in most cases.

She needs quite a bit of grooming whatever coat she has! If she is more like a Poodle’s she will probably need clipping every couple of months at a groomers along with daily or every other day brushing to control tangles and remove debris. She will be low shedding though with this coat and more likely to be hypoallergenic. If she has a coat more like a Pug’s she will shed a fair amount, will not be hypoallergenic and will need daily brushing to try and control the hair. You will be cleaning up after her a lot more too. Either way bathing should only be done when she really needs one and only ever use a dog shampoo. Check and wipe clean her ears each week and brush her teeth at least twice a week. Her nails will need to be trimmed when they grow too long. Some owners leave that to the groomer to do because cutting too low can lead to bleeding and pain. Dog nails are not like ours!

She is very good with children, other pets and dogs too. Ideally she should be in a home with older children who know how to handle smaller dogs. Small children tend to inadvertently hurt small dogs so would need to be supervised and taught how to play nicely. Early socialization and training are key in ensuring she is happy to be around any of them.

The Pugapoo is a noisy dog, there is no getting away from that! She can be quite a barker, her bark is loud too and she may snore when sleeping and snort! You will never wonder where she is at least but this means she is not best suited to places that have noise regulations that are very strict. She will need to be fed 1 to 2 cups of high quality dry dog food each day and have it divided into at least two meals.

Buying a dog is a big responsibility. There can be no absolute guarantees that they will be healthy as puppies and as adult dogs. But to have better odds buy from trusted breeders, visit the dog before buying, expect to see health clearances for parents as well as puppy. The Pugapoo could potentially be more at risk of the following Addisons, Cushings, Epilepsy, hypothyroidism, Legg-Perthes, patellar luxation, eye problems, Von Willebrands, PDE, nerve degeneration, Hemi-vertebrae, vaccination sensitivity, Skin problems, allergies, staph and yeast infections and hip dysplasia.

Costs involved in owning a Pugapoo

The Pugapoo puppy costs between $100 to $750 and then you have costs medical in nature such as blood tests, spaying, chipping, deowrming and vaccinations. You also have other initial costs like getting her a crate, collar and leash and carrier. These come to between $455 to $500. Yearly expenses to prepare for covering just basics such as food, treats, toys, license, vaccinations, check ups, flea prevention, license, training, grooming and pet insurance could fall between $930 and $1150.

Looking for a Pugapoo Puppy Name? Let select one from our list!