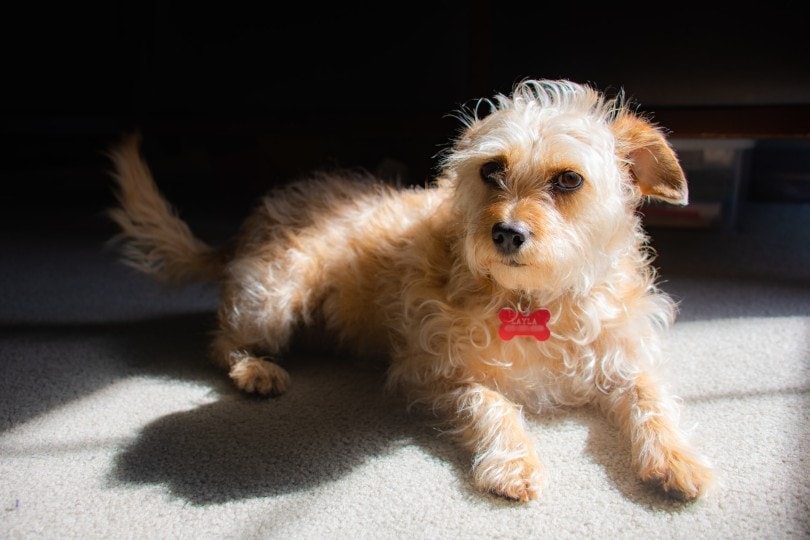 The Pugshire is a mix of the Pug and the Yorkshire Terrier and is a cross or mixed breed also known as a Pugshire Terrier, Yuggie and Porkie. He is a small dog with a life span of 12 to 16 years and is definitely an independent thinker but also wants to be close to you and is attentive.

The Pugshire is an interesting dog, definitely one with its own personality and mind so if you want a yes dog this is not the one for you. He can be very stubborn so is best with owners who are not going to let him get away with it! With socialization and training he could be a great dog for a home with or without children but watch his jealous side.

Where does the Pugshire come from?

The Pugshire is part of a selection of dogs that is growing in numbers called designer dogs. These are first generation litters from usually two different purebred parents. A lot have names that blend parts of each parents name. They have been around for several decades but their popularity and rise in numbers has happened in the last 10 years. Many are from the US though not all, and many do not have much known about who first bred them and why. Care has to be taken if you are settled on getting a designer dog as there are some really bad breeders out there just in it for the cash. Make sure you do your research. To learn about them we can take a look at the parents’ backgrounds.

Pugs are a very old breed coming from China and can be found as far back as 206 BC. Emperors of China prized them and they were given every luxury and pampered completely. When trading with Europe began in the late 16th century Pugs came over with Dutch traders. They became favored throughout Europe in many royal and noble families. He was known by different names in different countries, the Carlin in France, the Caganlino in Italy and the Mop in Germany. His popularity continued into the Victorian era and were brought to American after the Civil War. While they were popular initially they fell out of favor for a while. The Pug’s purpose was never to be a hunter, retriever or a ratter even, he was bred for one purpose, to be a companion.

That is what he still is today. He will happily be a lap dog all day and expects your devotion for which in return he will be devoted to you also. He can still be playful but is a far calmer dog than many!

The Pugshire is a smart dog who loves to be around people, get lots of attention and play. He is energetic but also loves his naps. He is very loyal and affectionate but can be an independent thinker and that means he sometimes has his stubborn moments. He loves to go out with you and walk or play and then come home and snuggle with you. He expresses his love with a lot of licking and he forms very deep bonds with his owners. This means you will have to be happy to have him follow you around the home so he can be close to you, and he will not like being left alone for long periods of time. He can be silly sometimes which is funny but can also be annoying when he gets too naughty.

This is a small dog weighing 5 to 18 pounds and stand 8 to 11 inches tall. While they can look like either parent often they look like a smaller version of a Pug but with that is a bit longer though still shorter than the Yorkie’s. Common colors for the coat are silver, grey, blue, tan and black. Their faces are small and round with dark eyes that are prominent, floppy ears and a black nose. It is a shiny, medium length, fine coat.

How active does the Pugshire need to be?

The Pugshire is a fairly active dog. He should be taken out for a walk at least twice a day for at least 20 minutes each if not a little more. He is well suited to apartment living in terms of his size but will need those walks. Going to a dog park is a great opportunity to give him off leash time to run around safely, to play with you and to possibly socialize. A yard is not a requirement to having this dog, but if there is one it is a nice place for him to explore and play in. He will basically have bursts of energy and playfulness and then follow them up with a nice nap!

Unfortunately the Pugshire is not easy to train and in fact can be difficult. For this reason he may be best with owners who are experienced and able to deal with this. Be patient and consistent as the Pugshire can be quite a stubborn dog which can make things frustratingly slow. You will need to make sure you are clearly the boss otherwise he is going to be even harder to control. Also use positive methods, praise rather than scold, encourage rather than punish. Early socialization is also important to see the Pugshire grow into becoming a confident and trustworthy dog.

The Pugshire can be low to moderate when it comes to shedding and brushing may be three times a week to daily depending on the length it is and whether you have it trimmed or cut shorter. When the coat is really dirty you can give him a bath but make sure you do not shampoo too often as it will dry out his skin. Also make sure you use a dog shampoo, some suggest an oatmeal shampoo.

Brush his teeth at least three times a week and check his ears for signs of infection then give them a wipe clean. Use a dog ear cleanser and a cotton ball or a cloth. Do not insert anything into the ear. His nails need to be clipped when they get too long taking care not to cut too low down. Dog nails have nerves and blood vessels in the lower part of them and nicking them will hurt the dog and cause bleeding. This is something a groomer can do for you if you are not sure where to cut.

They are good with children, happy to play have some lively time and then be affectionate and protective too. He also gets on well with other animals with socialization but small children should be supervised as they may not be careful how with how rough they touch and play. Some Pugs are prone to jealousy when other pets or children get more attention and some Pugshires can inherit that.

Being quite alert he can be a good watchdog and let you know if there is someone breaking in. He barks occasionally but some can be more frequent so training may be needed for that. He should be fed ½ to 1 1/2 cups of good quality dry dog food a day, split into two meals at least.

Costs involved in owning a Pugshire

A Pugshire can cost $200 to $500 for a puppy though prices can change depending on where you are and what kind of breeder you opt for. Initial costs other than the puppy itself for a crate, carrier, leash, collar and such come to about $200. Medical needs like shots, deworming, blood tests, examination, neutering and micro chipping come to around $300. Annual non-medical costs come to $380 to $780 based on possible regular grooming needs, license, training, food, toys and treats. Medical annual needs other than illnesses or emergencies but including check ups, flea prevention, pet insurance and shots come to $460 to $560.

Looking for a Pugshire Puppy Name? Let select one from our list!