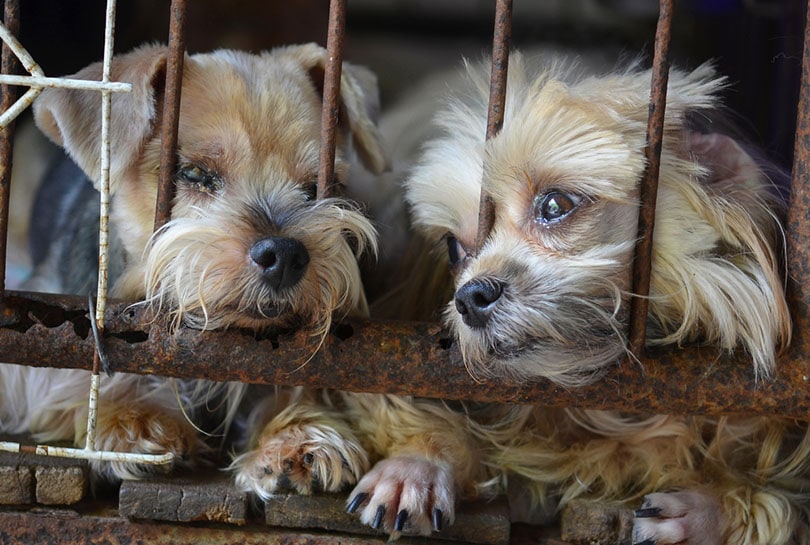 Puppy mills are a heartbreaking occurrence. These mills put profits above the safety and health of their dogs, including puppies and the dogs that they use for breeding. Often, this means having as little overhead as possible, prompting puppy mills to cut out veterinary care and shove their dogs in as little space as possible.

Females are often bred continuously, with puppies being weaned early to prompt the mother to breed again. Many dogs do not survive long in these conditions.

Here, we gathered the most eye-opening puppy mill statistics and facts.

The Size of Puppy Mills

1. 2.11 million puppies originating from puppy mills are sold each year.

Each year, about 2.11 million puppies are sold throughout the United States that originally came from puppy mills. Many of these dogs are sold in pet stores, which are the primary outlets that these mills use to sell their puppies.

No quality breeder would turn their puppies over to pet stores for them to sell to unknown buyers. Instead, professional breeders typically take great care in placing their dogs. Therefore, most pet stores must source from puppy mills to stay open. Many puppy mills also advertise their dogs online.

Many of these dogs are females, as one male can be used to breed many different females. Usually, these dogs are kept in dismal conditions and bred continuously. Most females do not live long, as their bodies quickly become worn out from the constant breeding and poor conditions.

Therefore, puppy mills have to continuously restock their females. Usually, these females are sourced from a litter produced by the puppy mill. Some dogs are inbred with their own father or brother. Of course, the exact number of dogs is always changing.

3. 10,000 puppy mills are currently active in the United States.

It is estimated that about 10,000 puppy mills are currently producing puppies in the United States. Many of these puppy mills have over 50 dogs, not including the puppies. Therefore, these operations are quite large.

The Legalities of Puppy Mills

Currently, there are over 400 laws in place regarding pet sales. Often, these laws are designed to put a stop to puppy mills, making many of their practices illegal.

These laws limit where pet stores can get their dogs. In some cases, it limits them to only animal rescues, effectively putting a stop to puppy mills because they will have nowhere to sell their animals. It usually also limits the age at which dogs can be sold, reducing early weaning.

Many of these laws also require that stores advertise where their dogs come from, so customers can make an educated decision before adopting.

5. Missouri has the largest number of puppy mills.

Based on reports in 2020, Missouri currently has the largest number of puppy mills for the 9th year in a row. In total, Missouri had 21 dealers, which is far lower than the second state, Ohio, with 16 dealers.

However, it was also noted that state inspections had decreased due to the COVID-19 pandemic. Therefore, there may be more dealers out there. To make matters worse, not all the dealers have been put out of business. Some of them are still selling puppies.

6. 40% of puppy mills are repeat offenders that have previously been exposed.

Almost half of the puppy mills out there have already been caught and fined once. But these breeders are not forced to surrender their dogs or are denied from owning dogs again, which enables them to continue to breed and sell puppies.

Even those that are banned from owning dogs often ignore the law and purchase dogs again, anyway. Since there is no mass database for those that aren’t allowed to own dogs, there is little stopping these repeated offenders from purchasing dogs again.

The Treatment of Females

8. Female breeding dogs produce an average of 9.4 puppies per female each year.

On average, females produce about 9.4 puppies a year at puppy mills. With the average litter size being about 5, that means the average female is bred at least twice a year.

It is recommended that dogs only be bred once a year, if that. Many proper breeders will spread out a female’s litters to ensure that the dog can completely recover between litters. However, at puppy mills, they don’t often do this.

Therefore, many females are overbred and die early deaths. Their bodies simply can’t handle the conditions of puppy mills and continuous breeding.

9. Most female dogs are bred every heat cycle and given little time to recuperate.

Female dogs are bred as much as possible. Little attention is paid to their health and wellbeing, so they often die.

Early weaning is common because it encourages the female to go into heat again. Not only is this bad for the puppies, but it also causes the female to breed more than nature intended, leading to health problems. Sometimes, females are killed after they are no longer able to breed.

10. Food in puppy mills is often contaminated, old, and even infested with bugs. Dogs are often malnourished for this reason.

The food at puppy mills is often low quality at best. At worst, the food may be old or contaminated. The conditions in the cage are often poor, which leads to food becoming contaminated if it hasn’t been already.

Dogs are often not provided with the appropriate amount of food either. It can be expensive to feed a pregnant female, and most puppy mills do not want to pay the extra cost.

The Treatment of Puppies

11. Dogs in puppy mills spend 24 hours per day in cramped cages, with little room to exercise or play.

Puppies are not given adequate room to run around and be puppies. There is little room to exercise or play in the cramped cages that they are provided. Therefore, puppies often miss this key socialization stage, which may cause them to end up with behavioral problems. It isn’t healthy for the females either.

12. Puppies are often weaned from their mother too young, resulting in physical and mental difficulties.

Puppies are often weaned from their mother weeks before it is natural. In fact, most puppies are simply removed from the mother and put straight on low-quality dry food. In many cases, they aren’t slowly weaned as they should be.

Often, puppies cannot eat or digest the food that they are put on, which leads to malnutrition. Therefore, these puppies may develop health issues. Early weaning can also lead to behavioral problems because the puppy is not learning behaviors from the mother as they should be. This can result in tons of medical bills for the new owner.

13. During shipping, puppies may be kept in containers without food and water for up to 12 hours.

Both licensed and unlicensed puppy mills sell to pet stores all over the country. Often, puppies are not sold within the state. Therefore, they must be shipped, sometimes across the country.

During these shipment periods, puppies are kept in cramped conditions. Food and water are typically not provided. Disease is common because many unvaccinated puppies are kept together. Many puppies do not make it.

No. In many cases, puppy mills are completely legal. Some of them are even licensed by the USDA. However, puppy mills may do illegal things, such as keeping dogs in unsanitary conditions. They must get caught doing these things, though, and punishments are often no more than a fine. (Puppy Mill Project)

What Are Puppy Mills?

The exact definition of puppy mills is a bit up in the air. Typically, though, these are large facilities that care more about profits than the health of their dogs. Often, corners will be cut whenever possible.

However, these mills can be quite small in some cases. There isn’t a minimum number of dogs that are required for a place to be a puppy mill. (Humane Society)

Does PetSmart Use Puppy Mills?

No. PetSmart often uses pets from local rescues. Most animals at their stores will have the rescue listed so you can tell where the animal is from. If it isn’t listed, we recommend asking before purchasing. (HuffPost)

There was once information going around that the Amish owned 20% of the puppy mills in the country. However, this has not been proven. Plus, based on the reports available on caught puppy mills, very few (if any) are Amish. (Snopes)

Puppy mills are a sad occurrence throughout America. They are located in every state, though they are largely concentrated in the Midwest.

Usually, these mills sell to pet stores, and many laws are centered around stopping this connection. If you can prevent pet stores from purchasing from puppy mills, you can effectively shut down puppy mills.

To avoid funding puppy mills, be sure to adopt from a qualified breeder or a rescue. Be sure to see the conditions that the puppy is kept in before purchasing.