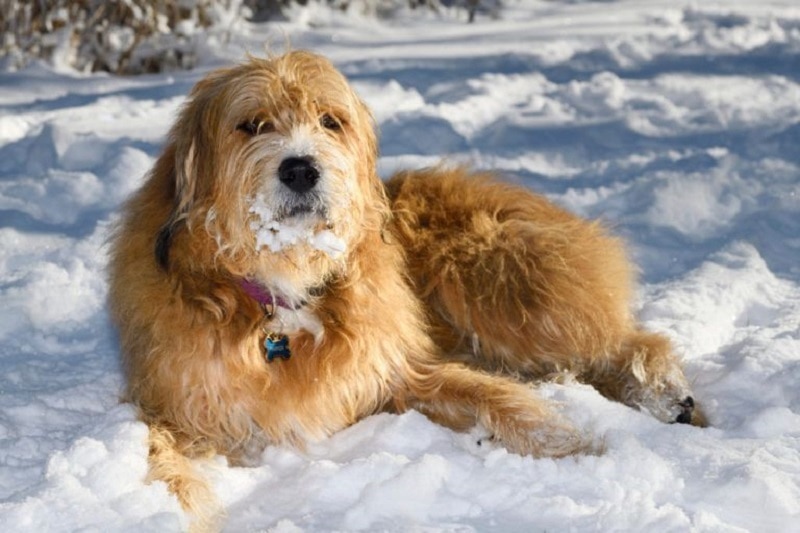 The Pyredoodle is a mixed breed from breeding the Poodle and Great Pyrenees together. He is a large dog with a life span of 10 to 12 years. He has talents in watchdog, jogging, tricks and obedience. He is also called a Pyrepoo, Pyreneespoo and Pyreneesedoodle. He is a calm, loyal and adoring dog to have and despite his size.

The Pyredoodle is a lovely bigger dog with a lot of love to give the right family or owner. He can be timid so socialization is important. He needs owners who are prepared for that and are happy to give him at least 30 minutes of outside time a day.

Where does the Pyredoodle come from?

The Pyredoodle is one of many designer dogs being created in the last three decades for the most part. While there are variations or exceptions designer dogs tend to be a cross of two purebreds, created deliberately and given a blended name. Mixed breeds are not a new thing, purebreds today come from breeders mixing breeds into the line to create something new. But the problem with a lot of the designer dogs being created is that it is being done with no care or thought by poor breeders just trying to make money. As trendy as it might be to own a designer dog today be careful where you buy them from.

With little to nothing known about many of these new creations including the Pyredoodle we look to the parents to get a better understanding of what the offspring might be like.

This is a very old breed of dog, coming from Germany originally not France as many presume. He was a retriever for hunters of waterfowl, his coat kept him protected from the water. When he came to France, probably in the 15th century he was bred more to the Poodle we know today. There were three sizes, the Standard continued to retrieve waterfowl, the miniature sniffed out truffles and the toy sized were kept by the aristocracy as companions they carried around with them. When the wealthy saw the Poodles performing in circuses having outlandish shaped coats they adopted this and also took to dying them too. He was registered in England in 1874 and in America in 1886.

Today the Poodle is a clever, loyal, loving and playful family dog. He is easy to train because he loves to please. With strangers he is wary and that gained him a reputation for being aloof. But with his owners and family he is friendly, entertaining and affectionate. He does have a lot of energy and he doe s not do well when left alone.

The Great Pyrenees was bred to guard sheep in the Pyrenees Mountains after which he is named. While we call him the Great Pyrenees in Canada and the US, in Europe and the UK he is known as the Pyrenean Mountain Dog. It is thought he is as old as ten to eleven thousand years where his ancestors from Asia Minor came to the mountains around 3000BC. The Great Pyrenees worked with shepherds and peasants and was thought of as a peasant dog. However in the late 17th century he was declared a royal dog of France which made him more popular among the nobility who used him as guard dogs. He stayed popular in England, the states and Europe through the 1800s and was part of the efforts to save the St Bernard breed.

Today he is an admired dog with a gentle and calm temperament. He is devoted and brave and a very good friend. He is often used successfully as a therapy dog. Early socialization and training are important for him. He is a serious dog and can be independent which means sometimes he has a stubborn streak.

The Pyredoodle is an adoring dog who loves his family, loves to be where the attention and activity is and loves to receive affection as well as give it. He is a sweet and calm natured dog who makes a great family dog. He is quite intelligent and is moderately easy to train, he just has an occasional stubbornness to him. He is still very much a guardian and gets one well with children and will guard them and the rest of the family. He prefers to be close to where the family is.

The Pyredoodle is a large mixed breed weighing 85 to 100 pounds and standing 15 to 32 inches tall. He varies in appearance from looking more like one or the other. He has a muzzle and head similar to the Pyrenees, a nose and lips that are black and almond shaped eyes. His ears are floppy and he has a broad chest and long tail with feathering. His coat can be double and water resistant like the Great Pyrenees or it can be a dense single coat like a Poodle. Length can be short to long, straight, wavy or curly and colors can be apricot, black, brown, white, gray, red, silver and brindle.

How active does the Pyredoodle need to be?

The Pyredoodle does not need a lot of space indoors as he tends to be calm and relaxes a lot. However it is nice if you have a larger space, either indoors or out where he can play some. He will also need at least 30 to 60 minutes a day of activity. This might be a couple of good walks, some jogging or running with you, trips to a dog park and so on. He can be lazy so the occasional one walk a day is not going to upset him! Just keep an eye on his weight in case he looks to be heading towards being on the heavy side. Also make sure some play or toys are mentally challenging him too.

He is moderately easy to train as he is smart and even tempered. Early socialization and training are important for this dog because sometimes he can have a timid nature that gets worse without the socialization to help him. This also means the best way to train him is with gentle and positive tactics not harsh methods. Praise, rewards, being consistent are important as is being firm as the pack leader but also fair.

Living with a Pyredoodle

Since his coat varies so much his grooming needs can vary by a lot too. Longer coats need more grooming, up to daily in fact. Some times his coat can be prone to tangles. When it comes to shedding it depends on the coat again, he can range from low to moderate shedding. A bath should be given just when he really needs one not too often as it damages the natural oils in their skin. His teeth should be brushed at least two times a week if not more and his ears will need checking once a week for infection. Cleaning his ears can be done with just a cloth or cotton ball and some water or an ear cleaning solution made specifically for dogs. Nail trimming may be needed if he does not wear them down naturally outside. Dog nails are not as simple as ours so learn about them and how to clip carefully, or leave it to a professional.

He is very good with children and will often act as protector towards them. He can get on fine with other dogs and pets too with early socialization and training. Make sure the children know how to interact with him and the young ones may need supervision still just because of his size.

He is a good watchdog and will alert you to intruders. He barks occasionally and can drool but not excessively. He will need to bed fed at least 4 to 5 cups of high quality dry dog food a day and he should eat it in two to three meals. He is adaptable to most climates.

To have the best chances at having a healthy dog buy from a good breeder and ask to see health clearances. Your Pyredoodle could inherit issues the parents are prone to which includes Addisons, bloat, epilepsy, patellar luxation, Cushings, Von Willebrands, hypothyroidism, Legg-Perthes, eye problems, Anesthesia Sensitivity, Joint dysplasia, skin problems and growing pains.

Costs involved in owning a Pyredoodle

A Pyredoodle puppy will cost you between $650 to $2400. He will also need a crate, collar and leash, blood tests, deworming, micro chipping, neutering, shots and other basic supplies. This will cost between $450 to $500. Health costs each year for basics such as check ups, vaccinations, flea prevention and pet insurance come to between $485 to $600. Other costs for things like food, treats, toys, license, long hair grooming and training come to $920 to $1000.

Looking for a Pyredoodle Puppy Name? Let select one from our list!