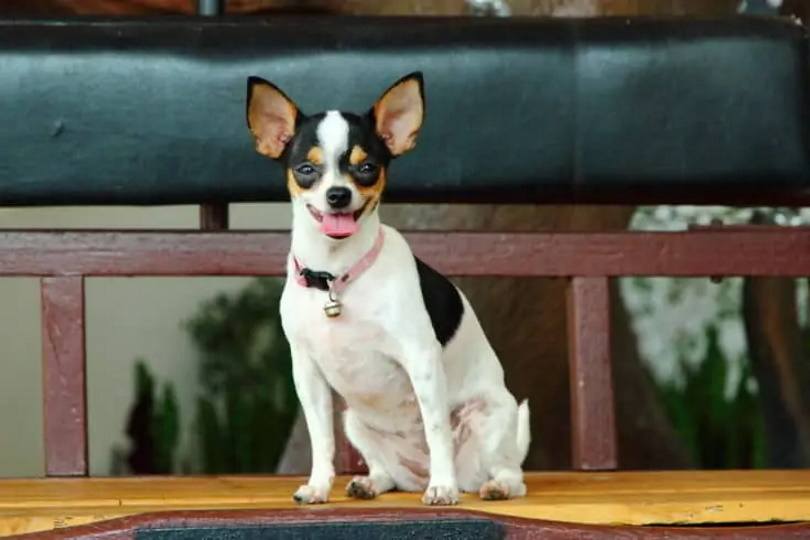 The Rat-Cha is a mixed dog the result of pairing a Chihuahua with a Rat Terrier. She is also called a Rat-Chi or Ratchi, or a Chihuahua/Rat Terrier Mix. She is a small cross with a life span of 13 to 18 years and has talents in tricks. She is a very loving lap dog but can be over protective as she bonds very closely to one owner.

The Rat-Cha is a great companion, she can be a lap dog and loves to get attention but she is also energetic and will need some exercise every day. She is loving but she can be over-protective so early socialization with her is important. As long as you are happy to spend time on that and to have a dog who will bond closely to one person she is a lovely dog.

Where does the Rat-Cha come from?

Crossing dogs is not a new development. Since dogs have been around people have experimented with crossing breeds, and have developed new breeds this way in fact. All dogs we have around today that we call purebreds, have a history of a time when they were being developed and mixed with other breeds, depending on the purpose the breeders had in mind for them. But over the last two to three decades the mixing of purebreds with the intended outcome being their first generation litter has become a popular thing. These dogs, like the Rat-Cha are being called Designer dogs and there are mixed opinions on them. However you feel, no-one wants to fund puppy mills and allow terrible breeders to profit so take care where you buy from. Since we have no origins on most of these dogs we look to the parents to get a feel for their potential.

One theory on the origins of the Chihuahua says they were brought over to Mexico by Spanish traders from China where they were then bred with native dogs. The other says they descend from an ancient dog found in 9th century central and south America called the Techichi. Either could be true. In the 1850s the short haired Chihuahua was discovered in a Mexican state called Chihuahua, which is where the name comes from. They were brought to America in the late 1800s. The long haired variety is thought to be a result of breeding the short haired with long haired dogs like the Pomeranian or the Papillon.

The Rat Terrier was bred in America as a working dog. He would work on farms hunting vermin and pests like rats. He was also able to hunt jackrabbits because of his speed in North America compared to central and south America where he was bred to Beagles to create a dog who was more of a pack animal. In the early 20th century he could be found on most farm but when poison started to be a common thing used he stopped being used.

Today the Rat Terrier is a stubborn but clever dog who is wary of strangers. He can be aggressive so socialization is important. They have a lot of courage and are very good at detecting the mood you are in. They love to please and are affectionate but he needs a lot of exercise or he can become poorly behaved.

The Rat-Cha is a very lively and sweet dog who loves to have fun. She loves to curl up on your lap and get lots of attention and is a very loving dog. She does tend to bond more closely to one owner and she can be over possessive and over protective of that owner. She loves to get attention and loves to play though if that play gets too rough for her she will snap. She does not like sharing her toys and she can challenge other big dogs so socialization is key. She is alert and very good at letting her owner know what she is happy about and what she is not!

She is a small dog weighing 10 to 15 pounds and standing 10 to 12 inches tall. She can have pointed ears or folded ones and her coat can be short or longer depending on whether her Chihuahua parent was short haired or long haired. Common colors are cream, black, brown, white and chocolate. Her legs are usually slim and long and her tail is curled.

How active does the Rat-Cha need to be?

The Rat-Cha is a fairly active dog so will though she is small she still needs walks outside twice a day totaling at least 30 minutes. Her indoor play will go towards some of her physical and mental needs. She is of a size where living in an apartment is fine for her as long as she gets to go out each day. Take her to a dog park where she can socialize and run now and then too.

She is a moderately easy dog to train in most cases but she can inherit some obstinacy from either parent. Keep firm, stay consistent and positive. Be the clear pack leader but encourage her with praise, treats and rewards. Early socialization as well as obedience training is very important. She will be a better dog for it and one that you are going to find easier to be around too. The training and socialization will also help calm the snapping and over protectiveness she can get from the Chihuahua.

Living with a Rat-Cha

Rat-Cha have moderate needs for grooming and maintenance. She does shed a moderate amount though longer coat ones seem to actually shed less than the short haired ones. Brush her about three times a week and be ready to vacuum on a regular basis. Brushing her will help distribute the natural oils around her body as well as remove debris and tangles. Bathing should be done just as needed. Have her nails trimmed when they get too long by a professional if you do not know how. Also check her ears once a week for infection and wipe them clean, and brush her teeth at least twice a week.

She is good with children, she is gentle when needed and playful too. Small children though should be supervised as they can be rough and she may snap. She needs early socialization to get on with other dogs and pets. With other dogs she can be wary or aggressive and bossy. With other small animals she can chase them.

She is a good watchdog as she will bark to let you know if there is an intruder. She barks occasionally otherwise and will need ½ to 1 cup of good quality dry dog food a day, split into at least two meals.

There are health issues she can inherit from her parents such as Patellar Luxation, Hypoglycemia, Heart problems, Incorrect Bite, Collapsed Trachea, Hydrocephalus, Open Fontanel, Shivering, Allergies and Demodectic Mange. Ask the breeder to show you parental health clearances which will give you better odds of a healthy dog.

Costs involved in owning a Rat-Cha

A Rat-Cha puppy will cost between $75 to $400. Other initial costs like a crate, carrier, leash and collar, blood tests, check up, shots, deworming, micro chipping and spaying will cost between $360 to $400. Other yearly costs for medical basics like shots, flea prevention, pet insurance and check ups come to between $435 to $535. Non-medical annual costs for simple things like food, treats, toys, license, training and grooming come to between $530 to $630.

Looking for a Rat-Cha Puppy Name? Let select one from our list!