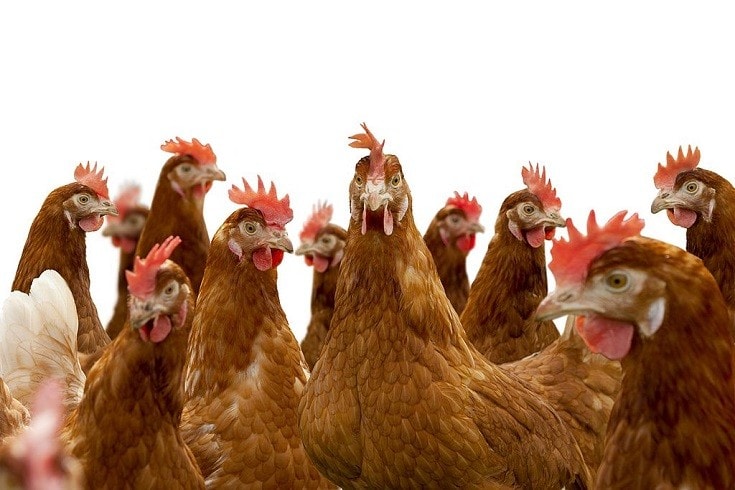 If you are tired of the common white chicken and are looking to add some color to your coop with one or two red chickens, you’ve come to the right place. We are going to go through all of the more than 50 chicken breeds recognized by the American Poultry Association to find which species are red so we can list them here. We’ll tell you a little about each one and provide you with a picture so you can see how it looks.

The Rhode Island Red chicken is so popular in America that it’s almost considered the standard red breed. It’s easy to maintain, withstands most climates, and is perfect for small yards and farms. Owners use it for laying eggs as well as meat.

The New Hampshire Red chicken is similar to the Rhode Island Red, but its color is slightly darker. It’s a prolific egg layer and can produce close to 300 large brown eggs each year. However, it tends to be a little more aggressive than other breeds and may even attack humans.

Breeders created ISA Brown chickens to lay eggs, and they can lay up to 300 eggs per year. It’s a mixture of several breeds, including the Rhode Island Red and the New Hampshire Red, but the exact formula is a secret.

Breeders created Red Star chickens in the 1950s to provide meat and eggs. It’s a popular choice for homesteaders and backyard owners because it doesn’t require as much space to run. It’s a sex-linked crossbreed that you can make by mixing the Rhode Island Red or New Hampshire Red with the Rhode Island White, White Plymouth Rock, or the Delaware hen.

The Production Red is another sex-linked breed that breeders created to lay eggs. These birds are capable of laying more than 300 eggs per year. While owners mainly use it for eggs, it can weigh 7 – 9 pounds and supply a good amount of meat as well. It’s not overly aggressive and is hardy enough to survive in most climates.

The Derbyshire Redcap is easily identifiable by its large red comb. It likes to live in free-range conditions, and you can use it to lay eggs or provide meat. These birds were popular in Britain during the 1800s, but their numbers are declining. The UK lists Derbyshire Redcaps as a vulnerable breed.

Welsummer chickens are an attractive breed with red and black feathers and a long tail. These chickens are active, friendly, and can lay up to 300 eggs per year. They are not easy to find in America but are fairly popular in England.

The Nankin Bantam is one of the oldest of the Bantam chickens. Bantam chickens are smaller versions of larger chickens, and there are several breeds. The UK lists the Nankin as critical on their endangered species list, and it’s extremely rare in the United States. There are two varieties of this bird. One has a comb with five points, and the other has a single-pointed comb.

Despite having white and green in its name, the Whiting True Green is a red bird that gets its name from the light green eggs that it lays. It’s a new breed with a single point comb. Dr. Tom Whiting developed it primarily for the fly-fishing industry.

Several breeds have a red variety within their species.

Leghorns are an egg-laying breed that’s available in several colors, including red. This breed’s origins are unknown, but you can find documentation of them since the early 1800s. The white variety is the basis for the Looney Tunes cartoon character Foghorn Leghorn.

The Red Cochin Bantam chicken is another color variety available in a bird with a large variety of color patterns. It’s a large breed with plenty of feathers that extend to cover the legs. Owners keep this bird primarily to show at exhibitions although it also is a good egg layer.

The Red Frizzle Cochin Bantam chicken is another small bird that you can find in a red variation. It’s a fuzzy little chicken that owners usually keep as pets and to show at exhibitions. It has a single point comb and no feathers on its legs.

If you are looking for a red chicken to keep as a pet in the backyard, we recommend something small like the red Frizzle Cochin Bantam or any Bantam varieties. Otherwise, you probably want to choose based on whether you need eggs or meat. Any of the birds on this list make great choices, and most of them are not overly aggressive toward other animals or people, so they are easy to manage.

We hope you have enjoyed reading and picked out a few choices you like. If you have learned of a few breeds you never heard of before, please share these 12 red chicken breeds on Facebook and Twitter.