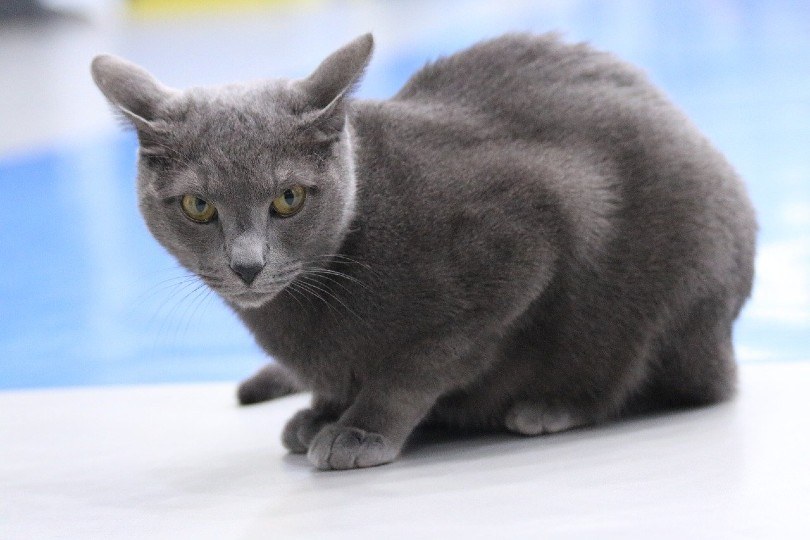 Several cat breeds originated from Russia. Several of these breeds have evolved to withstand the harsh Russian climate. Many are long-haired and extremely furry, which helps keep them warm in the harsh Siberian winters.

However, because Russia is so large, many of these cat breeds vary a lot. They are incredibly different from each other. Let’s take a look at which felines originate from Mother Russia.

A post shared by Crazy Cat Lady of Twitch 🐱 (@ussuri_cat)

Even in Russia, this feline is very rare. They aren’t technically a breed of domestic cat. Instead, they are a natural breed that developed through hybridization. They’re a mix of a domestic cat and a wild cat—the Amur in this circumstance. This is a small wild cat that is native to Russia.

Sometimes, this mixed breed is developed on purpose. Other times, a domestic cat roaming happens to get pregnant by a male Amur, and the resulting kittens are of this breed.

The Karelian Bobtail is a native cat breed that originated from Russia’s Karelia region, hence their name. These felines can be either long- or short-haired. The hair on their tail is particularly long. The bobtail is recessive, so not all cats of this breed will have the shortened tail. Often, kittens in the same litter will have varying tail lengths.

These cats come in many different colors and patterns. Their undercoat is soft and regularly sheds, while their topcoat is extremely thick.

This breed shares many characteristics with the Siberian, which we will discuss later in this article. They have a pointed coloration, which means their ear, tail, legs, and face are darker than the rest of their body. They have a rounded head with large eyes, similar to the Siberian. Their coat is usually described as medium-length, though the fur on their tail is often quite long.

This cat is known for its strong prey drive, so they are suitable mousers. Some of them are fans of water and enjoy playing in it. They are highly active and require quite a bit of playtime.

The Havana Brown looks much different from other Russian cats. This feline has short fur and a unique, brown coat. They weren’t technically bred in Russia at first. However, Russian cat breeds were used to create this breed, and this breed is currently prevalent in Russia.

This cat breed looks a lot like a Siamese. However, they are incredibly tiny—weighing only 1–6 pounds on average. This is the result of a genetic mutation that prevented the cats from growing fully. They are considered one of the smallest breeds in the world. They originated in Russia in 1983, when they were discovered. This breed is not a mini version of a larger breed but a naturally occurring “tiny” breed.

They have a kinked, bobbed tail that does not interfere with their ability to get around. They come in many colors and can have either a short or medium coat. They are playful but not highly active. They aren’t very vocal and will enjoy being a lap cat some of the time.

The Peterbald was developed by a Russian breeder in 1994, making them one of the newer breeds on the market. Many of the parent species used to make this feline are not Russian, though. They are known for being quite dog-like and people-oriented, though they are not as vocal about it as some other breeds.

They are loving and affectionate, making them great lap cats for older children and adults. They will follow you around the house, though many are also perfectly fine staying home alone.

This breed is native to both Japan and Russia. They have either short or long coats with a distinctive, pom-pom-shaped tail. They have a larger body type and are not quite “athletic.” Their strong prey drive makes them great mousers, which is why they are popular in Russia today. They are rarer in other parts of the world, though some breeders exist in Europe.

Some of these cats continue to live in the wild in their native region, where they are proficient fishers. Many enjoy water, even in captivity. They are gentle and affectionate, despite their wild-looking appearance.

The Siberian is one of the oldest cats from Russia. They are becoming more and more popular throughout the rest of the world as well. They are medium-sized cats with long coats. In fact, they are thought to be the ancestral breed of all the current long-haired breeds in the world. For this reason, they are likely closely related to all other long-haired cats.

This breed began as a landrace, which means that it developed naturally in the wild. They are selectively bred today, however.

These grey cats are known for their striking grey coats. They are sweet cats that are known for being gentle and loving. In many ways, they are an obvious family pet. They have a short, double-coat that is quite plushy. They will greet you at the door when you come home at the end of the day and are sometimes quite vocal about their need for attention.

While this cat loves their people, they are also okay with being alone during the day.

While the Donskoy isn’t well-known outside of Russia, they are a unique Russian breed. This breed can’t reasonably be described as hairless. However, they only have peach fuzz at most. Their skin resembles very closely human skin.

This breed is extremely loyal—so loyal they are often compared to dogs. They are intelligent and affectionate. Many enjoy puzzle toys and can learn tricks. They are very kid-friendly and don’t react poorly to lots of movement and loud noises. They will play often but don’t require tons of daily activity.