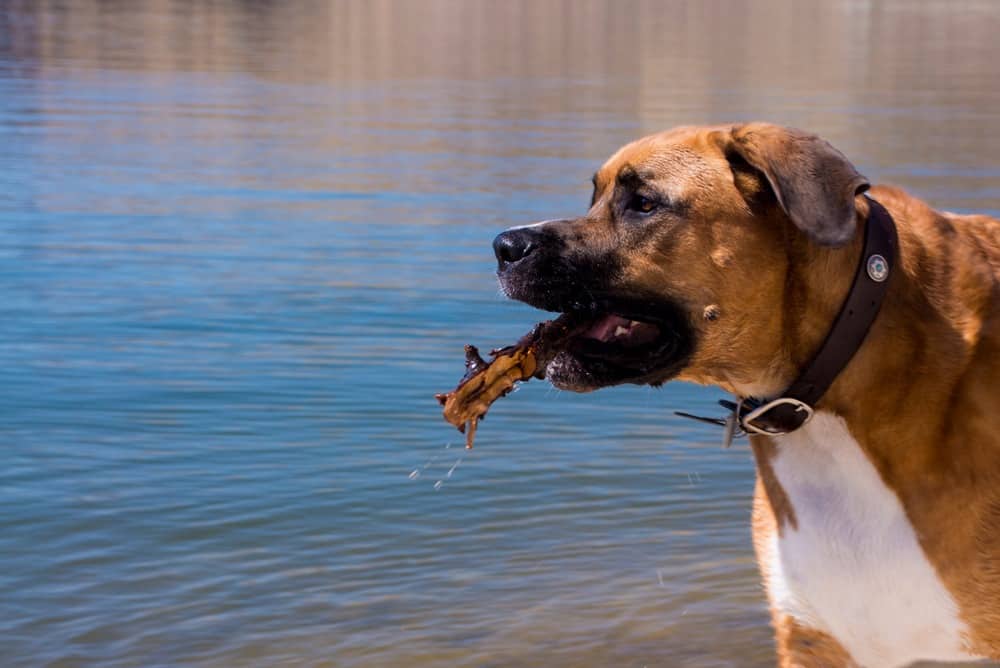 The Saint Dane is a mixed dog the result of breeding a Saint Bernard with a Great Dane. He is a giant cross and as such as a shorter life span than many dogs at just 6 to 10 years. He is also known as a Great Bernard or a Bernadane. He is a very well tempered, friendly and protective dog who makes a great addition to any family.

Where does the Saint Dane come from?

The Saint Dane is another designer dog on the larger end of the scale. Designer dogs are what people are calling the purposely bred mixed breeds around today, most of which have two purebred parents and a cute blended name. Over the last 3 decades the amount of designer dogs has shot up dramatically sue to their popularity with celebrities and the public. Some are bred by good breeders who are putting thought and care into their work, but unfortunately a lot are created by puppy mills and poor breeders who are just in it for the money. Therefore take care from whom you buy.

We can look at the parent breeds though to get an idea of what is going into the mixed breed dog when we do not have any information about the who, where and why of their creation. An important thing to remember is that while most breeders will claim their dogs have the best of both parents in them, in fact there are no guarantees with this kind of breeding. Your Saint Dane may end up having the best of both parents but he also might have the worst or fall somewhere in the middle.

The Great Dane is an old dog, drawings on artifacts of its ancestor can be found back as far as 3000BC! It is believed the breed’s origins are from the Assyrians who traded with the Greeks and Romans who then bred these dogs with their own Mastiffs. They were first called Boar Hounds because they were used to hunt boar. In the 1500s this changed to English Dogges. In the 1700s a visiting Frenchman in Denmark saw the Danish version of the breed and referred to them as Grand Danois. While Denmark had nothing to do with this dog’s breeding the name in some places has stuck. It was German breeders in fact who refined the Great Dane from something ferocious and aggressive to something more gentle like the breed we see now.

Today the Great Dane is a sweet, affectionate and gentle dog. He loves to play, is great with children and is very eager to please making him an easy breed to train. He loves being with the family and loves people in general. He will greet strangers in a friendly way but if he does think there is a threat to you or the family he will defend you. They love to cuddle and will do a very heavy imitation of a lap dog if you let them!

The Saint Bernard is a Swiss dog and it is thought they are a result of crossing native Alp dogs with Mastiffs the Romans brought with them. He gets his name from an alpine pass in the Alps called The Saint Bernard Pass which is dangerous to cross. Because of the danger a hospice was built there to help travelers and the dogs were used to guard the grounds. They were also used to guard the monks when they went out to locate travelers who needed help. Their location and job led the breed to being able to withstand harsh weather conditions and able to carry out search and rescue. Despite over 300 years of rescuing people they did not have an official name until 1880.

Today he is a friendly dog, steady in temperament and kind. They do love to get attention but will not be as demanding for it as some breeds are. He is kind and good with children despite his size. He does have a stubborn streak and early socialization and training can help iron that out.

The Saint Dane is a dog who is well tempered and very affectionate. He loves to lean in for hugs and some loving forgetting his size and sometimes catching you of balance! He is good with children and is loyal and protective too. When it is time to relax he will lay on your feet – yes on them as much as at them! Or he will sleep on the couch with you with his head on your lap. He is wary of strangers and is alert. He is also smart and attentive. He is active so needs a family or owner who can deal with not just his size but also his physical needs. He is always keen to please and is a super friendly family dog.

He is a giant sized dog weighing 160 to 200 pounds and standing 25 to 32 inches tall. His ears are flappy or hang down, his head is medium to large and wide and he has a deep chest. His coat tends to be short, silky and straight. Colors can vary ranging from red, black, white, fawn, blue, brindle and golden.

How active does the Saint Dane need to be?

The Saint Dane is a very active dog and will need a committed owner who will be happy to have an active dog to be with. He can join you for long walks, hikes, runs, bike rides for example. With his size it is important he is properly trained when out so that he does not pull at you. Trips to a dog park would be a good thing also and access to a yard to play would be a bonus. While he can adapt to apartment living it would need to be one with space for him to move comfortably around and he would still need daily outside time. You can tell if your dog has enough exercise, ones who do not can be restless, poorly behaved, overweight and even destructive.

He is easy to train thanks to his need to please, his good temperament and his intelligence. He listens to commands to given and wants to obey to make you happy. In some cases you may find he will need less repetition and so may even train more quickly than some dogs. Early socialization and training are an important part of pet ownership and will be something your dog will greatly benefit from whatever the breed. Early training is always the best way to go because he is smaller but also because untrained and unsocialized Saint Dane’s can be very stubborn and hard to control. Be firm, consistent and keep it positive. Use praise and treats to keep him motivated.

Living with a Saint Dane

He can be a moderate to high shedding dog so will need a fair amount of effort in his care. Daily brushing to remove loose hair and keep his coat healthy using a brush or comb. Bathe him when he needs it using a dog shampoo. If his size is an issue for bathing at home find a groomers that have bathing stations you can use. His ears should be checked for infection once a week and wiped clean then his nails should be clipped as they need it. If you are not familiar with dog nails learn up about it before trying that yourself. He should also have his teeth brushed at least three times a week.

This is a good family dog and with early socialization and training he is great with children, other animals and other dogs. Make sure the children are taught not to tease him or try to get on his back and little ones should be supervised around him just because of his size.

The Saint Dane can be a good watchdog and will bark to alert you to an intruder. He will need to be fed at least 4 1/2 to 6 cups of dry food a day. Make it of high quality as it has more nutrients in it and split that amount into two or three meals a day. He rarely barks.

When buying a puppy it is a very good idea to visit beforehand and to see the general health not just of your puppy but all the other dogs and the conditions of the breeder’s facility. You should also ask to see health clearances for the parents. There are health issues that can be passed on to any offspring so things that could affect the Saint Dane are Bloat, cancer, heart problems, surgical issues, eye problems, epilepsy, development issues, joint dysplasia and allergies.

A puppy will cost between $150 to $1000 depending on where you get it, where you live, what else comes with it and how popular the Saint Dane is at the time. Other things to pay for include micro chipping, a crate, collar and leash, blood tests, deworming, vaccinations and when old enough, neutering. That comes to another $450 to $500. Medical yearly costs for basics like shots, flea prevention, check ups and pet insurance come to $485 to $600. Non medical yearly costs for food, training, toys, license and treats come to $510 to $600.

Looking for a Saint Dane Puppy Name? Let select one from our list!

The Saint Dane is a giant dog so there are a lot of demands he will make on his owners just because of that. He will need more exercise, more room, more food! However when you get a good one who is well bred, trained and socialized he is very well behaved, even tempered, devoted and loving. You will wonder how you did without that gorgeous giant in your life.