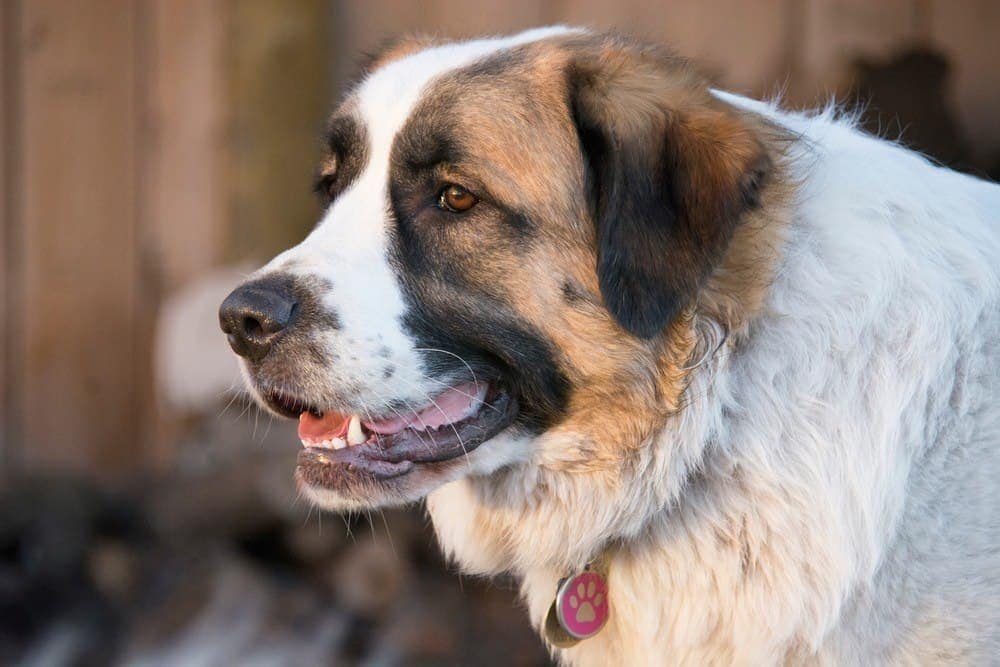 The Saint Pyrenees is a mixed breed with Saint Bernard and Great Pyrenees parentage. With ancestors like that, it’s no wonder that Saint Pyrenees are big dogs. A mature Saint Pyrenees can tip the scales at up to 180 pounds. Despite their size, Saint Pyrenees are generally gentle and loving dogs that get along well with children and make great family pets. If you’re thinking about buying one of these dogs, keep reading our guide to learn whether or not they are suitable for you and your family.

Saint Pyrenees Puppies – Before You Buy…

For a Saint Pyrenees puppy, you can expect to spend somewhere between $350-$700 on average, depending on your breeder. You should do your homework before purchasing any dog, but you need to be particularly careful when buying a designer dog such as a Saint Pyrenees. These dogs are not recognized by the American Kennel Club, which means these puppies will not come with the pedigree paperwork that a purebred dog would. Be sure to ask about your pet’s parentage, including behavioral and health history, so that you have an idea of what to expect from your dog. It is very difficult to discern what your dog’s adult temperament is going to be like when you adopt him as a puppy, so information about your puppy’s ancestry is very valuable. Too often, people dispose of their mixed breed dogs because they don’t turn out the way their owners wanted them to.

1. This Is a Very New Breed

Originating in the 2000s, Saint Pyrenees are one of the newest dog breeds out there. That means these dogs have very little history. However, the Saint Pyrenees parent breeds, the Saint Bernard and the Great Pyrenees, have their own long and well-known histories.

2. Great Pyrenees Likely Evolved From An Ancient Breed With Origins In Asia Minor Some 11,000 Years Ago

Speaking of long histories, the Great Pyrenees is an extremely old breed. In fact, fossils of this breed dating between 1,800-1,000 B.C. have been found in the Pyrenees, a mountain range that runs along the southwestern border of France and the northeastern border of Spain.

Since the 17th century, these dogs have been used as watchdogs and rescue dogs by monks in the Western Alps. Saint Bernards have been credited with rescuing over 2,000 people from dangerous snowy conditions in the Great Saint Bernard Pass.

Saint Pyrenees are generally known for their gentle demeanors and they are extremely sociable creatures, especially with their families. However, their friendliness towards strangers differs from dog to dog. One of their parents, the Great Pyrenees, is an excellent watchdog; the Saint Bernard, on the other hand, is not. Saint Bernards tend to be friendly with strangers, whereas the Great Pyrenees is much more wary. You can probably expect your Saint Pyrenees to be somewhere in between. Saint Pyrenees are also intelligent dogs who will learn quickly, but you should know that they can be stubborn.

Despite their giant size, Saint Pyrenees are excellent family dogs. Due to their herd dog heritage, they will feel the need to protect your children as though they are their own. Looking at their parentage, it’s really no surprise that Saint Pyrenees love children. You may be familiar with films in which Saint Bernard characters look after children, such as the Beethoven movies. There’s a reason why Saint Bernards are often shown as family dogs in pop culture: they really do love children!

However, if you have very small children, you should keep an eye on them while they are playing with your dog. Remember, these dogs can weigh more than many adult humans; though the Saint Pyrenees is generally friendly and gentle, he could easily knock small children over if he gets too excited.

Things to Know When Owning a Saint Pyrenees:

When selecting food for your Saint Pyrenees, make sure to choose kibble that is formulated for large breeds. Saint Pyrenees are prone to becoming overweight, so it is recommended that you feed them only during set times instead of allowing free eating.

In order to determine how much you should feed your dog, you should consider your dog’s weight, age, and activity level. If your Saint Pyrenees is overweight, calculate the amount of food your dog needs based on his ideal weight, not his current weight. You can use calculators such as this one to approximate how much food your dog needs, but keep in mind that it may not be 100 percent accurate. Talk to your veterinarian to determine exactly how much you should feed your dog.

Saint Pyrenees are fairly active dogs that need a good amount of exercise to be happy and healthy. If you plan to bring home a Saint Pyrenees, you should be prepared to exercise your dog for around an hour each day. Your Saint Pyrenees will also appreciate having access to a yard or a dog park where he can run around freely. If you live in an apartment with no access to fenced-in yard space or if you have a busy schedule, you may want to reconsider purchasing one of these pooches.

If you live in a climate that gets very hot, you should be mindful about what time of day you are taking your Saint Pyrenees out for a walk. Their thick coats are perfect for withstanding cold temperatures, but they can be prone to overheating in the summer. Make sure to avoid taking your Saint Pyrenees out during the hottest part of the afternoon and give him plenty of opportunities to drink water and rest in the shade.

A post shared by Henley Stalinski the Floof (@henleythefloof)

As mentioned, Saint Pyrenees are smart dogs that will learn quickly. However, they are not always the easiest to train due to their independent and occasionally stubborn nature. If you plan to buy a puppy, you need to begin training very early. Start by teaching your puppy simple commands. Make sure to be confident and consistent in your training so that your Saint Pyrenees knows who’s in charge; although they aren’t aggressive, Saint Pyrenees may very well assume dominance if you aren’t careful. If you aren’t an experienced dog owner and don’t know how to train a dog, you may want to set aside time and money to bring your pet to a professional dog trainer.

The descendent of mountain dogs, Saint Pyrenees have a fairly thick coat that tends to shed frequently. To keep shedding at bay and prevent their fur from matting, you will need to brush your dog’s coat about once per day. Take care not to bathe your Saint Pyrenees too often; doing so will deprive his coat of its natural oils. When you do bathe him, make sure to use a shampoo that is formulated for dogs.

Saint Pyrenees are relatively healthy dogs. As designer dogs, they may have fewer health issues than some purebred dogs. However, they can always inherit their parents’ health issues. Be sure you understand your dog’s health history to the fullest extent possible before bringing him home.

The biggest consideration you should make when deciding whether to purchase a male or female Saint Pyrenees is size. Although all of these dogs are large, there is a very big difference between a dog that weighs 120 pounds and a dog that weighs 180 pounds. Consider what you can handle. If your dog pulls on his leash or if you need to carry him for some reason, will you be physically capable of handling him? You might also consider behavioral differences between male and female dogs. Males may be more likely to display sexual aggression than females. That being said, if your dog is spayed or neutered, sex-based behavioral differences should be negligible.

All in all, Saint Pyrenees are wonderful pets. They are not aggressive and they are gentle with children, making them great family dogs. However, if your family is not very active, if you live in a small space such as an apartment, or if you are not an experienced dog owner, the Saint Pyrenees may not be for you. You should also consider whether or not you can handle a breed of this size. If you think you can meet the Saint Pyrenees’ needs for space, activity, and consistent training, this could be the dog for you.